I was scrolling through some old pictures this morning because once again the weather outside is not compatible with the thoughts that are floating through my dinosaur sized brain.
I need to get out and take more pictures.  I'll work on that.
Until then this is what you get.  There not bad really.  You will find that there is no rhyme or reason to these pictures at all just pure fun and recollection.  Enjoy-or not. 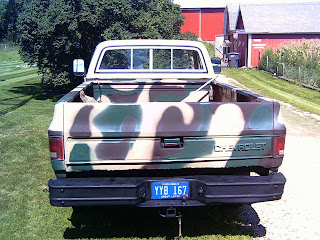 Here is my old truck.  It used to be a brownish color quite similiar to rust.  I'll leave it at that but it was a pretty good truck.  The kids were slightly,  no scratch that,  very embarrased to ride in it but it got them where they wanted to go right?  I miss that truck.  I sold it to a tree for free.  You can finish the story however you choose.  :) 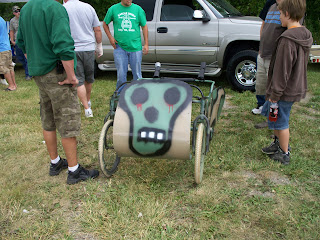 Here is the derby car I built for the Eagles annual Nascar Derby race.
I pretty much just cut up a couple bicycles and welded them back together in a new configuration.
I had fireworks on the back bar that I lit just before my heat started so they were going off as I went down the track.  The crowd loved it. 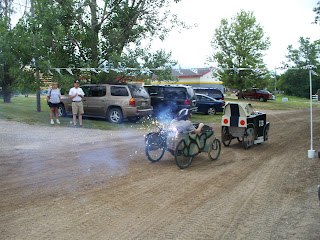 I found an old skunk pelt and made a helmet of sorts out of it.  You can see the stripes up above as well as the fireworks.  We took second place after way too many runs.  The car was starting to fall apart by the last run.  My steering broke about 2/3 of the way down and I headed for the ditch which allowed the other guy to win.  It would have been a photo finish. 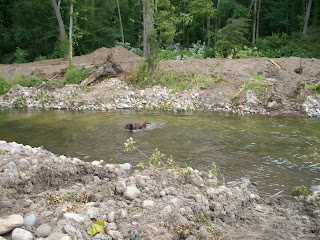 Here is a shot of Gunner swimming in the Battle Creek river behind the house.  They were still in the reconstruction phase at this time.  They restructured the river creating trout habitat and other things that I don't know squat about.  Gunner loved it so I think they did a great job. 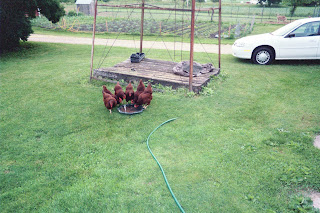 This is the old windmill that I tore down and made a deer stand out of.  Back then the chickens used to roam the yard and I would fill up the bird bath top and set it on the ground for them to drink out of.  You can see the start of the garden in the back ground. 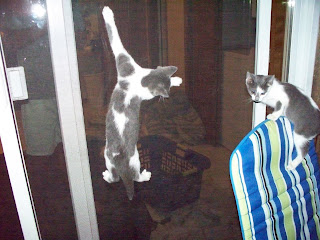 Rascal and Douglas playing on the sliding screen door.  Dang Cats anyways.
Someone had dropped off like 10 or 12 kittens one time and we got stuck with them.
Some we gave away, others were sick and were put down and we ended up keeping 4 as barn cats.  2 male and 2 female.  The males have disappeared and now we have the 2 females.  We had them spayed so we didn't have anymore cats running around.
Well that's it for now.  Blogger changed the way you post pictures and it takes forever.  I have been doing this post for almost an hour and this is all I got.  So unless they change it back or make it better I may not be a blogger for much longer.  Here's hoping!!!!!!!!
Posted by Bushman at 8:01 AM
Email ThisBlogThis!Share to TwitterShare to FacebookShare to Pinterest