A little crude I must admit but I am a man of little wealth.  (Is it still called wealth if it is virtually non-existent?) Sometimes I think I get more pleasure out of seeing how cheap I can do something than actually doing it.  I love to say," look at that and guess how much it cost?"  Nada.  Nope. Nothing.  Not that I don't like to buy something I just have a hard time parting with my money.  Unfortunately while it sits in the bank (while I'm contemplating) someone else spends it.  DOHHH!
Anything over $20 and I start him- hawing.  I can't believe I just typed him haw spell check isn't gonna like that one.  So I built a crapper AKA toilet, porta john, head, bathroom, dump hole, the list goes on and on.
The plywood and 2x4s I got from work and the duct tape has been hanging around for who knows how long.  Almost used it up on patching the camper though.  Damn Mice Anyways.  We dig a hole in the woods and place said crapper on top of hole and the rest is stinky history.  Yes I can't believe I'm posting this either.
When we leave camp we burn it.  No problem!  For you environmentalists out there we remove the duct tape.  For those of you who don't care we leave it on.:):):) 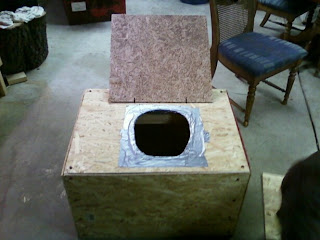 She's a beaut' eh?
So leading up to the crapper is my menu for deer camp.  Irony or is it Memorex?
I have two meals in the freezer already(dinner)
I call it my tribute to Michigan.  Walleye and venison Loin.
Thanks Harry for the beautiful fillets from Saginaw Bay caught this past July.
Also looking at pork chops, fried chicken,venison stew, and burgers.
It's tough cooking when you have limited resources and limited packing space.
I have decided to squeeze one of my turkey fryer set-ups into the mix with a fish basket for the chicken and fish and french fries.  It will be worth the space.  I have 7 more pounds of jerky going in the smoker today and some venison grind that will be turned into summer sausage(or fall sausage I guess) with cheddar cheese in it.  Which leads me to my next topic of processing deer for people.
Had a guy drop off a deer Monday night.  Kind of a friend although we don't really see each other much.  Friend of a friend we'll say.  I have processed his deer in the past.
His neighbor shoots a doe and gives it to him.  Now he has to take care of it in a hurry so who does he call?  Me.  I'm a little more expensive by about $20 but I can turn it in a day.  So he tells me to turn the loins into jerky and make the rest into sausage and sticks.  OK I wasn't planning on that much work right before I leave but he's a nice guy and I could use the $.  So that night I order my supplies from out of state and have them rushed in so I could finish it this weekend.  I e-mail him an estimate and he chokes.  $250 for a whole deer turned into jerky and sticks is a great price but he just can't afford it.  I'm stuck with the supplies.  $61 dollars for supplies and his processing cost $70.  So I guess I made $9.  Hmmmmm
Which is why I'm making sausage for myself now.  Oh well.  He's happy,  I learned a lesson.  No one is dead and the damn chicken still wakes my dogs every morning so let it live right?
Crap On, Crap On, The Crapper!
Posted by Bushman at 8:09 AM
Email ThisBlogThis!Share to TwitterShare to FacebookShare to Pinterest