Not much today.  I could bore you with more accounts of camp preparation but by now you may be thinking enough is enough.  So I won't.  Not much anyways. :)  Shot two of the rifles yesterday.  My 7mm Remington Magnum and  a borrowed Remington 742 Woodsmaster Carbine in 30-06.  Quite possibly the state's favorite deer rifle.
Both were punching bulls eyes at 75 yards.  Should be dead on at up to 150 yds.

Thanks Ernie for letting Joe use your rifle.  A true friend and a gentlemen when it comes to youth and hunting.
It was Ernie that led Joe to his first buck about 4 years ago. 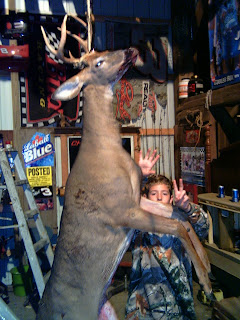 It was a nice 7 point with a perfect heart shot at 40 yds with an open sights smooth bore 16 gauge that my Grandpa gave to me years ago.  I was so proud.  I had it all on video.  Joe had buck fever and was shaking so bad I had to bear hug him to quiet his shivering.  Though I must say I was shivering a bit myself and it wasn't cold.  :)
So today I need to shoot the 300 Weatherby Magnum.  That's Dad's rifle.
You may ask why we use large caliber magnums for Michigan whitetails.  The reason is we used to hunt all over the country and into Canada.  Elk, mule deer, antelope, caribou.  So we wanted a rifle for all game species.
I also filled the propane tanks yesterday. 3 -20 pounders.  If you just exchange them you only get 15 lbs of propane in them.  The exchange companies like blue rhino say it's safer.  Well the tank is built for 20 so I think it would be fine.  They still charge full price too.  Last time I exchanged it was $19.99 plus tax.
When I fill it's $21.20 out the door.  There is also 5 more lbs in the tank.  Do the math!
So now there isn't much left to do other than pack clothes and finalize.  I'll leave it at that.
Daylight savings today!  I forgot to tell the dogs so they had us up at 3 instead of 4.  I made Momma let them out and feed them.  Then they came back to bed and slept until 6:30.  Whoopee.
Here is last years buck!
I'll try and better him this year but I don't know. 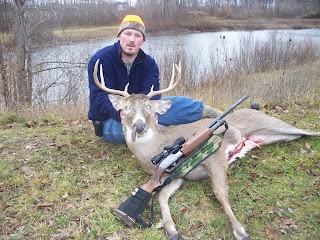 Here is my buck from 2 yrs ago.

I have been scouring my brain for names for our deer camp but just can't think of anything I like.
Our old camp was Crooked Arrow Camp because someone once stuck a bent arrow in the trees in front of our camp.  We also referred to it as Main Camp.  The latter being the most boring.
Another camp we had in the area after the main camp broke apart was Lake Camp.  Named for the lake the camp was located next to.  The camp sat on a small plateau and overlooked the entire small lake.  Bit breezy but a beautiful spot.  Another place we camped was at the creek.  This is where we intend to camp this year if no one else has chosen it first.  However Creek Camp is rather boring as well.  We tend to name things after major geological features as in Lake Camp, Creek Camp, Swamp Camp.
I want a name that immediately brings to mind excitement, fun, yearning, a bit of mystery and intrigue.
The camp is located next to Gilchrist Creek, bordered on the south by a high ridge that starts out flat by camp and rapidly climbs in elevation as you head south east along the creek.  The ridge drops severely to the creek and is troublesome to traverse in it's steepness.  My little brother Brian shot a nice buck from this locale a couple years back. To the east is the creek and across the creek is what remains of the old two track that is no longer used because the bridge is gone and the other end of the two track is now private land.   To the right side of the two track lies a small cedar swamp that follows the creek and the high ridge mentioned above.  To the left of the two track is some flat land mixed with pines, poplar and birch.  If you follow the two track directly east you hit private land in about a half mile.  To the north is the creek again, some flat land with mixed trees leading into hardwoods and mature trees,  the creek is the property line for private and state land to the north of camp.   To the west is more high ridges, the main two track in and plenty of oak trees once you've reached the tops of the ridges.
We have hunted this area a few times.  Last time up I saw a huge buck right across the creek, not 50 yards from camp.  We had decided to stay in bed that morning because it was a monsoon rainstorm outside.  When I peeked out from the screened in room to check on the weather, there he was.
I took my first buck from this spot when I was 15.  21 years ago.  I also wounded my first buck from this spot 21 years ago.  Brian took his first Michigan whitetail from this spot.  So we have three firsts from this area.  Perhaps Joe will take his first deer with a rifle from this spot.  Dad can take his first deer as an out of stater as well.  Perhaps a theme developing here?
"First Timer's Hunting Camp"
We'll see.
Posted by Bushman at 8:14 AM
Email ThisBlogThis!Share to TwitterShare to FacebookShare to Pinterest