Running late this morning.  Need to leave the house no later then 6:45 to be in the woods on time.  I have an appointment with my boots. 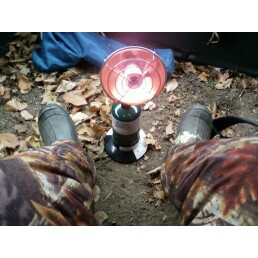 I must say I do enjoy sitting in the woods as long as I have my heater going.  When did I begin to turn old?
This is what I do when I am hunting.  Nice warm blind, a good book, and occasionally I look out the windows.  Like Friday morning.  Around 8:30 I decided to light the heater and retrieve the book from the depths of my cluttered backpack.  So I light it and set it down in front of me and when I look up there is a big doe standing there.  She doesn't know I'm there and I am hunting right next to the freeway so it is very loud with semi trucks and morning commute going by so she doesn't hear a thing.  So I shut the heater off, stick the gun out the window and soon as she is broadside I squeeze the trigger.  Now I'm not a city boy by any means but I truly did (as gangsta rappers would say) popped a cap in her A$$.  Because that's all that happened.  The cap fired but the powder did not ignite.  This sounds basically like a hopped up version of the toy pistol you played with when you were a kid.  6 shot caps made of plastic and smelling of sulfur.
So she jumps a bit (45 yards away) and I scramble for another cap (buried in my pocket)
I find my speed loader (small plastic tube that holds black powder, ball, patch and cap) put another cap on and by then she has seen me through the window and is now facing me head on and doing the head bob and foot stomp thing.  Which is a good an indicator as any that she is about to bolt.  So I figure I'll go for the head shot.  "Aim small miss small" to quote a favorite movie line.  Well I missed small alright.  Small or big it was still a miss and off she ran.  So I grab the speed loader and as I'm about to reload the gun I notice that all the caps have fallen off the tubes.  I have no backups either.  So I 'm stuck in the woods with no way to shoot and what to my wondering eyes should appear?  Yep!!
Damn deer anyways!!!
Posted by Bushman at 6:25 AM
Email ThisBlogThis!Share to TwitterShare to FacebookShare to Pinterest