Perhaps that will just be the title to all my Sunday posts from now on.  Sunday Salutations  I like to have creative titles but sometimes it's just not possible.  I'll just blend the two together.  Hang on while I adjust the title.  OK.  Now you know this post has something to do with beer.  Nasty, yucky beer.  Now I'll drink just about any kind of beer.  I like most any kind of beer.  I have my favorites.  They usually start with B and end in R but there are exceptions.  Yesterday I picked up a 12 pack of Great lakes Brewing Company sampler pack.  It had 6 varieties of beer in it.  How fun you say!  Ackkk!  That's the sound of Bill the Cat.  Remember him?  I started off with an "Authentic Belgian Wheat Beer"  It should have been called Authentic Shitty Stuff or ASS for short because it was awful.  I tried to nurse it, I tried to slam it, I poured it in a glass, I let it breathe and I even suffocated it.  It still sucked!  So I just slammed it and shook my head for a couple seconds afterward smiling the whole time.  Smiling you say?  I thought it was bad?  It was but smiling keeps you from throwing up!  Yep learned that on Dirty Jobs with Mike Rowe(one of the greatest shows ever)
So after wiping the tears from my eyes I returned to the fridge.  Can't get any worse can it?  It can and it did.  The next one was simply titled Mackinaw.  It was some sort of ale with a flowery hops taste.  It was worst than the first.  It was like someone soaked rose petals in a skunk beer and then named it micro brew.
I'm thinking that GLBC is working on the theme of the old story we read growing up about the Emperors New Clothes.  They say it's great and it's a micro brew so it must taste good as well.  Some people no doubt would say they love it (they should have their tongues removed).  This one double sucked.  So I slammed that one down, grinning and crying the whole time.  No crying does not help but the salty tears are a welcome respite on the palate after this beer.  I'd rather do shots of seawater!!
Of course being a man I just can't call it quits.  It's like the guys on Blue Collar Comedy tour and stinky smells.  You know it's gonna be bad but you can't resist.  So back to the fridge I go.  Now I gotta buzz on cuz I pretty much just slammed two beers.  What they lack on taste I think they make up for in alcohol content.  Or I'm just a lightweight.  I grab one of my favorites.  A red lager.  This one should be OK.  It was.  Just OK though.  I certainly wouldn't buy it again.  At least I got to drink this one and didn't have to slam it or pour it out.  After the Red lager it was a Porter.  This one was the best of all.  Not great but definitely better than the prior 3.  This one went down the hatch fairly easy.  So.......no I didn't go back to the fridge.  Momma and I went up to Joe's and stupid me I have to try the Cock A Doodle brew.  First thing I did was check the label to see if it was made by GLBC.  Thankfully it wasn't.  This one was made up in Saginaw.  I think they used the river water to make it or chicken urine or perhaps chicken vomit.  The worst one of the night.  Sorry Joe but never again shall I partake of your chicken vomit juice.  So I said to hell with it.  No more crazy beers today.  Worst of all I have a couple nightmares hanging out in my fridge.  I still have to try the Big Mac and the IPA.  Here's hoping!!!
On a side note I have posted part 2 of The Payment if you care.  I know it took forever for the next part.  Sue Me!! 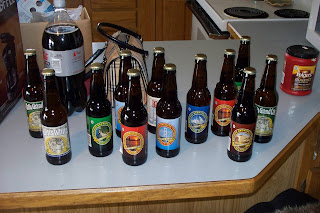 Posted by Bushman at 8:56 AM
Email ThisBlogThis!Share to TwitterShare to FacebookShare to Pinterest