Today's Post is brought to you by the Letter M

There is only one thing I think of when it comes to the letter M.  I'm sure for many of you it would be Mother or Mom but not for me.  Far from it actually.  It's another blast from the past but I have developed a theme sort of and keeping true to what is working so far.......................
Have I told you the story of how I committed my first felony?  Didn't think so.  A re-post would be too easy.

It was a cold January day, my friends and I were out on the frozen waters of Lake Orion for a pick up hockey game.  Of course boys will be boys and soon we were having more hockey fights (for fun) than playing actual hockey.  In case you didn't know ice is slippery and skates are sharp and well I ended up slicing a boys throat when I fell on him and he ended up dying.  I was charged with negligent homicide and sent to a juvenile detention center for 55 years.  Oh wait a minute that was last nights episode of Law and Order.  What happened to me was I was picked up in the air and dumped back on the ice and landed square on my shoulder.  I spent the next couple of weeks in a sling.  Although the first rendition has a bit more drama it didn't happen.  This story gets better just hang on.
So unable to do the things a normal teen would do in the winter months like hockey, skiing, ice fishing,snowmobiling, hunting, you get the point, I was bored out of my gourd and all I could do was drive.
So two nights before the Giants defeated the Bills in Superbowl XXV and also two nights before my father held a great big Superbowl party I headed out to pick up a couple friends to go cruising.

Cruising soon became boring and we put our three heads together and came up with something new to do.  After picking up the necessary supplies we headed out for the gravel roads far into the country.
Approaching speeds of 35 mph friend #1 leaned out the window and "WHACK".
Deep into the night the decimation continued and no road was left untouched, no subdivision, not even my own road.  We were out to set a record.  It was on my road that the last of the Mohicans met its demise and friend #2 declared himself the winner and wanted to stop and pick up his trophy.  As he bent over to claim his prize headlights popped over the hill behind us.  I hollered for him to get back in the jeep and as he was scrambling in the door, still clutching his trophy, I stomped on the accelerator.
The headlights were closing rapidly and as I approached speeds of 55 mph I knew we were being chased.  I crept closer to 60mph and still the headlights drew even nearer.  70 then 80 and now the vehicle was a mere 30 yards behind us.  In a last ditch attempt to thwart our adversary friend #1 tossed friend #2s trophy from the window and as it bounced harmlessly off his front bumper he crept closer.  I eventually reached speeds of 90 MPH which was what the speedometer topped out at and at one point, peaking a hill on the road, I felt the jeep go airborne.  We eventually lost the tail in a FoodTown parking lot, or so we thought, and headed home.  Swearing we would never do that again. Also elated with the fact that we got away with it.

"So that's it?" you ask.  "End of story?"
No not quite.  It gets even better.
"Better than the time you chased a deer through the woods with only the barrel of your muzzle-loader?"  Pretty close I say.

Two days later just as Whitney Houston is finishing up singing the Star Spangled Banner and my Father's house is packed with guests for the big game there comes a knock at the door.  Two men in blue.  With shiny gold badges pinned to their chest.  Yep!  I will leave the rest up to your imagination and I can't remember all the things that went through my head that night but it was one crazy night.  Turns out the pursuer of my jeep that night only needed to get close enough to get the plate number.  DUH
Of course it was registered to my Father and even the cops with donut jelly dripping down the front of their uniform can figure that one out.
In the end we came to an agreement with the cops that because we were so young no charges would be filed as long as we replaced every thing we destroyed.  Which by our count was probably around 500.  Luckily their count was only on my road and it added up to around 20.
We went door to door and explained to every homeowner that we were the ones that destroyed their property and we were here to correct our wrongdoings and replace everything.
The comical thing was no one really cared.  We got a lot of oh don't worry it will just get destroyed again and because I was still in a sling they wanted to know if I hurt myself destroying their property and they were sorry if I did.  In the end it cost us about $40 each and a giant dose of embarrassment.  Especially to our parents.  I'm really thankful they didn't nail us for all of them because I think I would still, to this day, be installing...................
Mailboxes. 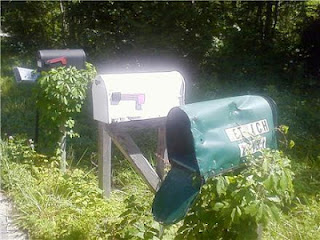 (to all those affected by my doings 20 some years ago I apologize and for those of you who have reinforced mailboxes, bite me!)
Posted by Bushman at 7:24 AM
Email ThisBlogThis!Share to TwitterShare to FacebookShare to Pinterest