So you wanna be a landscaper huh?

I woke up this morning to the sound of thunder.  I was elated.  I laid in bed resting my weary muscles and my beer induced headache until 8:30 this morning.  Yesterday was a grueling day.  Here is how it went........

I began the day around 7 am stacking some more wood onto the wood wall.  It grew by about 8 feet.
It soon was warm enough to remove the outer shirt.  I then began cleaning up the area where all the firewood was.  Removed all the pallets and raked up the bark.  I also did the same thing under the deck where the wood was stacked there as well.  There was a half ass rock wall at the edge under the deck and I ripped that out and hauled the boulders to the front yard.  There were two more piles of boulders in the backyard that I hauled to the front as well. Then I finished mowing the lawn.
After the lawn I started tearing down the concrete retaining wall.  Here is a before shot. 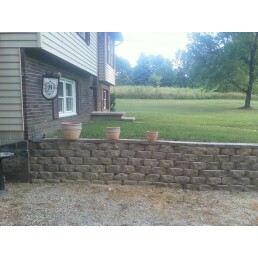 I hauled all the blocks to the back yard to reconstruct a new wall back there.
I have the best helpers. 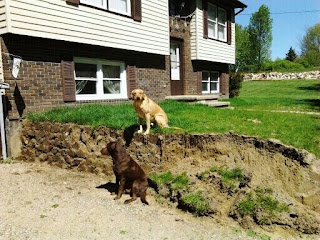 One by one they went into the tractor cart and I stacked them on a pallet. 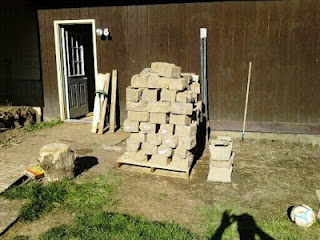 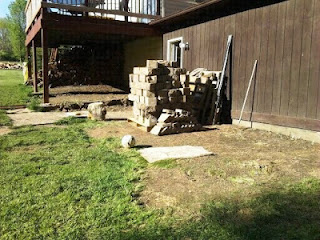 Then came the fun part.  The new wall will be triple tiered so there are a few tons of soil that need to be removed.  I have a shovel and a garden cart.  What I needed was a skid-loader.  Oh well no pain no gain right?
Here is the lower tier excavated.  It looks a little sloppy but I needed to leave some soil in it to be able to build the wall with. 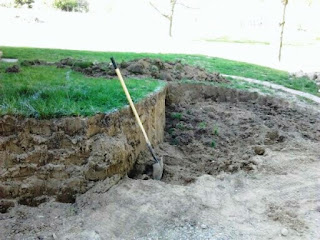 You can see the white line in the grass, that will be the second tier. 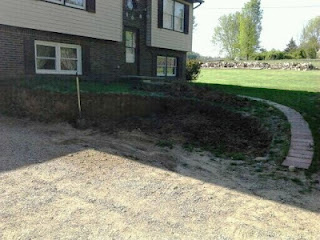 So that was the digging part.  I would estimate about 4 thousand pounds of soil removed.  Two tons!
What did I do with it all?  On the south side of my garage it slopes steeply towards the woods and there is no walkway.  It can be tricky walking on the wet grass or snow to get to the backyard so I decided to dump all the dirt next to the garage and make a level walkway.  I will eventually retain this as well and have the front "sidewalk" (above picture) installed on it. 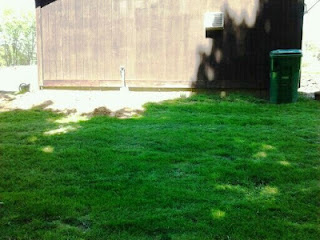 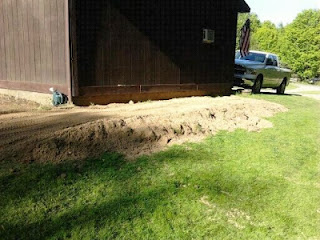 It was a tough go at first because the dirt is 99% sand and the mower, with a cart full of sand behind it, would get stuck really easy.  Of course when I dumped the cart only a little sand would come off so I had to hand shovel it off the cart.  Yippee I get to shovel it twice.  After awhile it was packed down enough that I could drive over it.  I may even use the wall blocks to retain this.  Not sure yet if I have enough.

My plan is to use them under the deck.  I want to excavate the soil under the deck all the way to where you see the wood stack begin (in the picture at the top of post) and install the blocks there.  Then I will put in a paver patio under the deck and construct a little bar area at the edge.  I also need to remove the posts holding the deck up and put new ones in.  They didn't do it right the first time.  They poured a slab of concrete and put the post on top of it.  Makes the deck wobbly.  I am going to dig holes and use 6x6 posts.  That should stabilize the deck more.

My step kids Dad stopped over on his way home from work and we drank a bunch of beers together.  Most people would think this is weird but my wife and I have a pretty good relationship with her ex and his wife.  It's good for the kids as well.  Then it was a hot shower, another cold beer and I barbecued up some chicken quarters and had some sweet corn for dinner.  After that Kaitlin and I went out and had a campfire and ate smores.

While I was cooking dinner I gave her an impromptu lesson on driving the tractor.  I explained to her how to start it, which gears she should use and the function of a clutch.  I was a proud poppa.  She jumped right on, fired it up and started hauling wood from the stack to the fire pit like she had been doing it forever.  She even backed it into the shed without a problem.  Made me smile.
So I know it was a pretty lazy day but hey everyone needs one once in awhile.  Hope yours went as well or for your sake didn't.
-Bushman

Posted by Bushman at 9:22 AM
Email ThisBlogThis!Share to TwitterShare to FacebookShare to Pinterest