Just a quick shout and a few pics.  The heat has subsided for a couple days so I have a little energy in me for now.  Although it looks as though the 90s will return once again and not the collar up and pinned up pants 90s I'm talking about the make your b&!!$ stick to your leg kinda 90s.

Here is a shot of the deck.  I had to replace all of the posts and most of the framing.  It looks much nicer than the concrete blocks that the old posts were sitting on.  It takes a little bit of preplanning and some good muscle to do this with one person but hey it's me right? 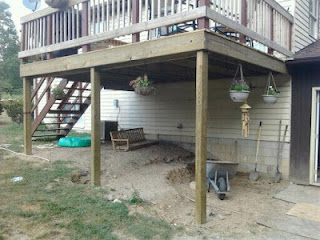 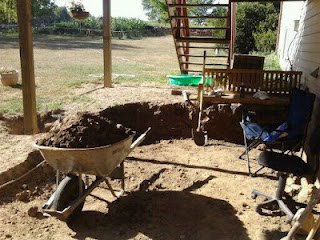 This shot is the roughed out excavation.  The wall will run along the length of the dirt wall and fade into the ground as the wall gets shorter. 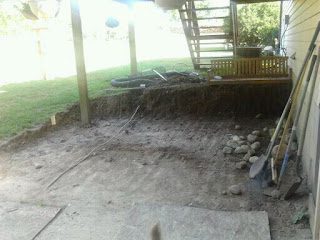 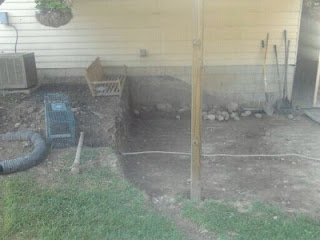 There will be a bar in the corner where the wall runs out.  The remaining area under the deck will resemble a tropical jungle but with native plants.  Tall ferns and hostas, Japanese iris, many others.  The first main objective is to screen the AC unit.  So a small lattice panel will be installed between it and the patio area and then planted with taller types of vegetation.  I will also be installing a small "creek" on the back side of the wall where you see the wooden bench swing in the pic above.  It will have a very small splashing waterfall and the water will run directly behind the wall and follow it's course and will disappear into the ground just before it hits the bar area.  A pump buried in the ground will recirculate the water back to the top of the waterfall.  An outdoor ceiling fan will be mounted under the deck to provide a nice air circulation.  The quiet burbling brook will provide a place to sit and relax.  I'm thinking about some misters to mount above as well for those hot days.

The garden has rebounded well from the storm although there are a few things that were flat out destroyed.
Compare this picture to the one at the top of the page.
We are getting red tomatoes now and the sweet corn will be ready in a couple weeks.
The section of White corn I planted has three ears per stalk.  They are nice ears too.  Usually when you get three one is kinda runty!  We have been eating squash, zucchini, green beans and onions so far. 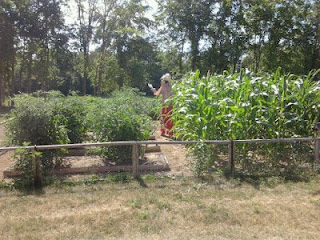 Well it's time to make breakfast and head outside to start the install of the retaining wall.
I'll see you soon!
-Bushman

Posted by Bushman at 10:36 AM
Email ThisBlogThis!Share to TwitterShare to FacebookShare to Pinterest