A gentle breeze filtered through the trees, rustling the oak leaves still clinging desperately to the giant trees.  Their vain attempt to hold onto the summer weakened as the wind challenged their incessant need to remain with their mother.  Brown ferns slumped over and bowed their heads.  Unlike the mighty oak leaves they had given in to the chill of the oncoming winter.  They bent, huddled with their curled fronds wrapped around them as if to keep warm.  The forest floor lay covered in debris that once adorned the canopies, rust colored leaves, sticks that had succumbed to the early winter winds, shiny acorns complete with their caps and a multitude of other forestry goods.

The two track turned slightly and the leaf litter crackled under his boots.  He studied his environment as he walked.  Surveying every branch, every tree and every thing in between.  His keen eyes were acutely aware of any movement and as such his heart skipped a beat every time there was some.  A flirting chickadee, a scampering squirrel even the sway of a bunch of tall grasses.
He continued onward, down the track.  His mind absently counted the steps, one hundred and one, one hundred and two.  No particular reason but he had been a counter for many a year.  Perhaps an ingrained trait that kept him focused on the things that he was here for.  He adjusted his pack, shifting the straps to alleviate the tension on one shoulder.  He marvelled in the beauty of it all.  Such a large world with so many details it was difficult to notice them all.  His count increased as he made his way down the trail.

When the count reached seven hundred and sixty two he stopped.  This spot looked right.  The forest floor revealed much and the ghost trails of the creatures that roamed this forest revealed themselves to his keen eye.  He stepped from the trail.  He did not count these steps.  These ones were not important.  His eyes locked onto every detail of the surrounding landscape.  The gentle rise and fall of the forest floor.  The way the wind would sweep across these knolls, the way it would breathe.  He raised his eyes to the sky and noted the position of the sun and the path it would take during the next few hours.  Then he made his decision.  He removed the parcel from his back and strapped it to the tree of his choosing.  Slowly, quietly and carefully he made his way up the tree.  The counting resumed here but for a purpose this time.  Fifteen feet, sixteen feet and when he reached twenty feet he stopped.  He secured his perch and sat down.  He made ready, physically, mentally and emotionally.  He closed his eyes for a moment and when he opened them he breathed a sigh of relief.  He was home.

The minutes soon turned to hours and the sun began to wane in the western sky.  Shadows grew ever longer and the air began to rapidly chill.  His pulse quickened.  This was the hour.  A crunch in the leaves drew his attention.  He studied the surrounding forest with a fierce intensity.  Then he saw it.  One small shiny black spot.  The black spot moved and as it did transformed itself into a slender brown leg.  The leg moved slowly, painfully slow as his heart rate continued to elevate.  Within a window of two or three minutes the leg became the full shape of the creature that he pursued.  Three more steps, this time he counted backwards, two more steps, one more step and then the only sound was the whip of the string as the forest erupted in a clash of whirling leaves and flying sticks. 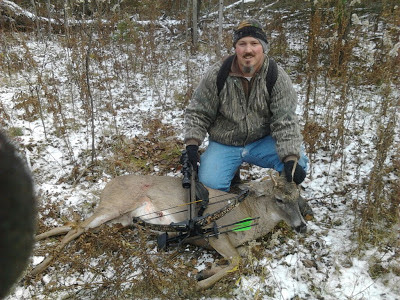 In my 24 years of hunting eligibility I have been up to deer camp 14 times.  Up until now I have never taken a deer during the archery season.  This year we were in camp early enough before the opening of the rifle season that I had a few days to bow hunt.  I finally succeeded.  Although it is only a spike buck it is one of my favorite deer.  There is more to this story but I'll save that for next time!
Posted by Bushman at 8:34 AM
Email ThisBlogThis!Share to TwitterShare to FacebookShare to Pinterest