Have you ever just felt like writing but didn't know what to write about?
I do that all the time and tonight I acted on it.  I picked the first thing that came into my mind and that was what I wrote about.  There is such a great story hidden here.  I always wish I had the time to breathe life into the words I spatter upon this page.  Take a moment and write your own story, or carry mine.
I have found some new inspiration in my writing.  I won't go into detail but every writer craves, no needs, that recognition to light his spark again.  So many times has it faltered but now is burning strong again.  Thank you brother Brian! 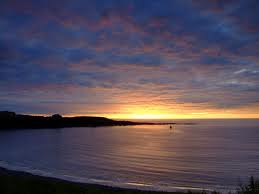 We talked for awhile.  Small things, weather, the children, the new special at the diner.  It was nervous chatter, anxious words among the serene background.

I hadn't spent this much time with her since that day in the lawyers office.  Her long brown hair had been pulled into a cold, tight bun.  Her eyes had been hardened blue steel.  Today the bun was missing and her hair tickled her shoulders, flirting with the offshore breeze.  He could smell her shampoo and it made his heart sink.

"I think this should be the last time we see each other", she spoke to the waves crashing into the beach.

He tried to speak but his lips wouldn't part and if they had, it would have been a mess and he didn't want to seem weak.  He nodded and watched a gull dive and pick something from the receding surf.

"The children will be fine", she told him.  "I think they seen it coming before we did"

They were adults now, even though they still called them children.  Sara was a junior in college and Robert had taken that job in Hong Kong and they almost never seen or heard from him.

She paused and watched as the sun began its descent below the waves.  He took three more steps before he realized she had stopped.

She remained silent for some time before answering him, "It was broken from the start".

She turned her gaze from the setting sun and looked at him.  Her eyes, once bright and laughing, had been reduced to a cold, cloudy autumn day.

"Take care", she muttered and spun in the wet sand and began walking in the opposite direction.


He stood there for quite some time, watching her and as she faded into the horizon he turned to watch the light show that bounced off the waves as the sun hid itself deep into the folds of the Western sky.  In his eyes reflected the beam of light that crossed the sky at that precise time when the sun disappeared from view.
A flash, of light, of love, of sorrow.

He turned and began to walk.  The surf crashed at his feet.  Cold at first but warming with each step.  As it reached his knees he smiled.  Everything would be fine.

The undertow ripped at his feet, threatening to pull him under.

As the water reached his chest he gasped a little but now it didn't matter.  The waves crashed into his face and he spat and coughed the salty seawater from his mouth, shook his head, took one last deep breath and disappeared beneath the surf.

The silence under the water was calming to him and he marched on deeper and deeper, chasing the sun.
Posted by Bushman at 8:23 PM
Email ThisBlogThis!Share to TwitterShare to FacebookShare to Pinterest