So your house wears makeup eh?

"You know I'm not good at this", he said to her.  His brows furrowed and his eyes squinted.
"Last time I ended up in Bangladesh and the time before that was jail."

She looked at him, gauging him, studying his facial expressions.  Even after all the visits to the psychiatrist and  the utopia of drugs he was on she still wasn't convinced.  The whole Bangladesh thing had cost thousands and their credit cards had been maxed out for two years with no reprieve in sight.
While that adventure had required an immediate dispersal of cash the bouts of incarceration had taken any idea of a savings account and tossed it out the window for the next 3-5 years.

He only seemed to remember the last few years, while she recalled all of them.  The frog farm, the winery and the brewery.  The investment firm and also the candy making business.  The list was endless.  His compulsive and erratic behavior had almost cost them their marriage more than once.

Despite it all she loved him.  His quirky ways, his dimpled smile and  the way his hair stood straight up one one side when he awoke in the morning.  She had never known anyone in her entire life that could even come close to him.  He had her heart and she was hopeless to think anything less.

She would keep a close eye on him this week.  Even though she would be at work while he was on a week long layoff from his job.  God willing they would make it through this week without any wacky adventures!
He just couldn't sit still.  Some form of adult ADD is what the doctor had said.  He had just laughed and said that was impossible because he was lousy at math.  Both her and the doctor had given him a puzzled look until they understood his play on the ADD acronym.  That was how he ticked.

His mind wandered, better yet, traveled to so many places in one day it would drive a normal person insane.
Constantly steering off course and changing directions.  You would be a fool to try and keep up.

She kissed him on the cheek, three times as was customary and bid him farewell for the day.  He had been up since 4:30 this morning.  Sipping hot coffee and pecking away at his laptop.
She knew the minute that she left that the man who was peeking out of the blinds, watching her pull out of the drive, would be off and running.  Heaven help us she whispered to herself as she drove away.

Well it's here again.  My week long layoff from work.  I had planned on painting the back of the house this week but plans change.  I already did it over the weekend!
At first I didn't like the color but it's growing on me.  It has to because I don't have the cash to change the color now!  The garage turned out to be the worst.  The dry, weathered siding really absorbed the paint.  It took 3 solid coats to cover it.  It needs to be replaced but for now paint will have to do.
I painted the windows white, covering up that ugly dark brown.  It's like a new house now.  Amazing what a little make up will do. 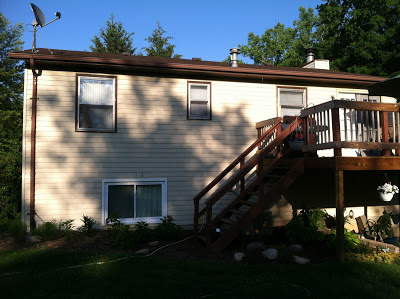 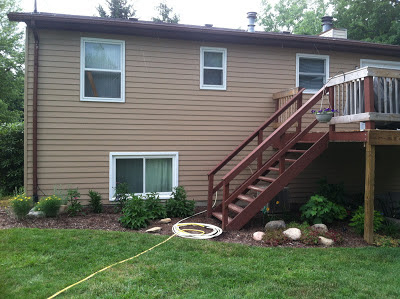 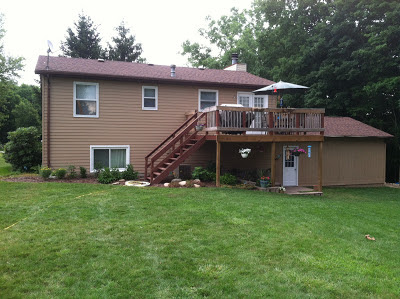 The bees had bored a bunch of holes in the wood siding.  All the white spots are caulking. 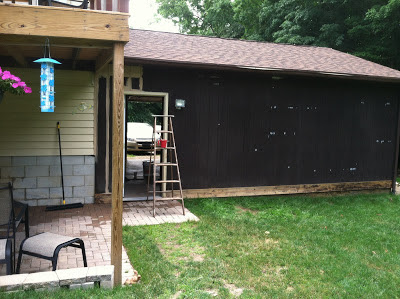 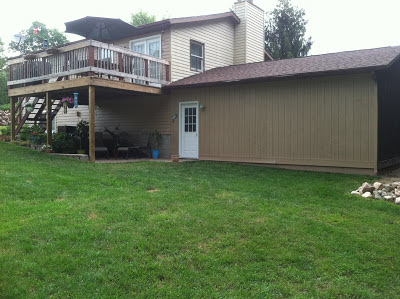 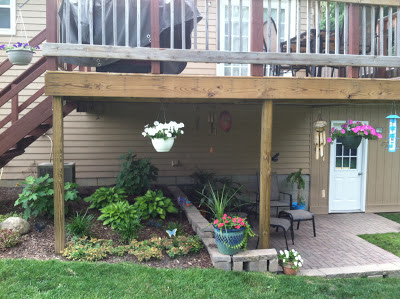 I still have some paint left.  We only had enough money in the budget for 5 gallons right now.  I think I have enough to paint the shed and the front of the house.

I also decided to build a more permanent chicken coop.  Louie is hell on the chicken tractor and he needs some room to swim and what not so I utilized the old dog kennel panels and started construction on a new coop last night. 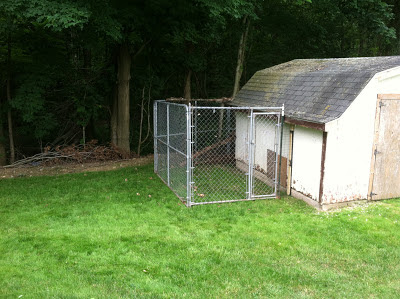 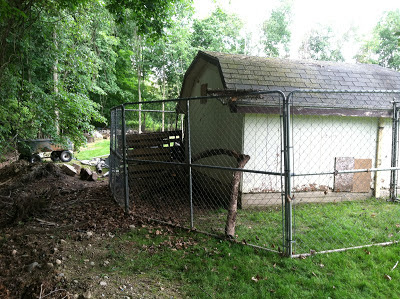 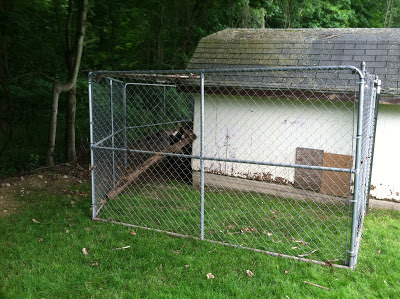 I put some logs in there for the chickens to climb on plus there is a bunch of old leaves behind the shed they can scratch in.  Lots of worms and slugs too.  The shed already had a hole in the side for an old coop or kennel so  just have to pull off the patch boards and make a door.  I am also going to build Louie a small pond in the corner.  I have some leftover pond liner from my landscape days and I want to build a shallow pond by making a ring of boulders and then laying the liner inside of them.  I will build it so I can easily roll one boulder out of the way and the liner will collapse into the spot which will drain all the water out of the pond.  That way I can change the water every couple days.  Inside of the shed I will make a nest area and sleeping quarters for the birds.  I'll probably put the chicken tractor on Craig's list.

That's all for now! If it doesn't rain all day I will try and get into the garden and grab a video for you.  It is doing great!

Posted by Bushman at 6:50 AM
Email ThisBlogThis!Share to TwitterShare to FacebookShare to Pinterest