A Night Among the Trees

The orange flames danced their way into the sky.  Lifting the swirling embers high into the air where they courted each other in a brief but intense romance before disappearing into the dark abyss of the endless night.
As the fire began to diminish the two men inched closer to the warming flames.  It was cold tonight.  Every minute that passed the flames receded and the breath from the men became more and more visible.

"It's almost time to hit the hay", the man with the 4 day beard stubble said.
"Yeah, I suppose, fires just about out anyways", his companion agreed.

The two men arose from their perch near the circle of rocks that held the only warmth and light in an otherwise sea of cold darkness.  They entered into and older tent style camper.  Shortly after, the "woof" of a lantern could be heard and the camper windows began to glow a soft yellow.

"Turn that heater on, it's freezing in here", the older man said.
"C'mon Pops, don't be a sissy", the younger man said as he bent over and lit the heater.

Another "woof" and the propane heater came to life.  The metal heat reflector began singing as it warmed.
Within minutes the camper was warm.  The younger man remembered a time long ago when the older man was the one who lit the heaters and the lanterns.  He remembered the man making lists and planning the meals.  The times had reversed themselves and it was now the younger man's turn to run the deer camp.
He hoped one day  his son would be able to do the same for him.

As the old man rolled into his sleeping bag the younger reached for the heater.
"What are you doing?", asked the father.
"Shutting the heater off for the night", said the son.
"Leave it on, I'll freeze", said the old man's voice from somewhere in the mountain of blankets and sleeping bags.

The son turned off the lantern and crawled into his own pile of blankets.  He lay there for some time thinking about days gone by.  He chuckled when he remembered how his father used to shut off the heater at night because it was "too warm" in there.  He drifted off to sleep hoping for snow and dreaming of big bucks and happy times. 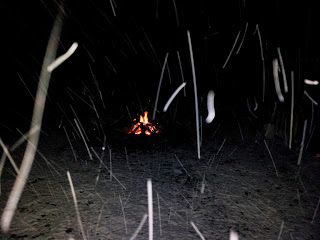 Posted by Bushman at 7:00 AM
Email ThisBlogThis!Share to TwitterShare to FacebookShare to Pinterest