Tracks in the Snow

This morning I was browsing the web as I do every morning when I don't work.  I don't read the paper, I get all of my critical news from the top of the Yahoo page.  If I need to know it then it will be there.  Keeping up with the Kardashians and Obamacare is top priority!

Anyways I happened upon an article about a guy's first deer hunt.  It was quite comical.  He was 34 years old when he shot his first buck and without any prior experience his tale was relatable.

Approaching 40 years old myself I can still remember my first hunts. (barely) except they all seem to roll into one giant story with multiple deer being shot in one season.  Vivid recounts with my Father begin with,"Remember the year I shot the half-rack and you shot the doe while Jr. missed?"

Father says," No the year you shot the half rack was the year I got the 8 point and the guys at the lake got arrested for not having their pistols in a case while driving the two track."

"No the guys at the lake were arrested the same year that Ricky shot back to back 8 points and Jr. gut shot that doe and that guy from Vaughn's camp somehow shot his rifle off right outside our coach in the early hours of opening morning, I say"

That is how we remember deer camp.  So many memories it's hard to place them all in order.  It doesn't matter anyways.  I do remember my first deer ever though.

It was the second day of the season.  (or was it the third?)
We awoke that morning to about a foot (or two) of snow.  It was incredible.
One of the guys camped at the lake had offered me his spot because he had tagged out already.  It was new territory.  Across the creek (where we now camp) and up on the bluff.

That next afternoon I was sitting quietly in the blind, which was mostly a pile of sticks with a hollowed out center.
Next thing I knew a big 'ol buck came walking out of nowhere and stopped right in front of me.  I put the crosshairs of Grandpa's trusty (rusty) old 30-06 springfield on his front shoulder and pulled the trigger.
The buck crumpled in a heap.  I couldn't believe it.  Now what?  I hadn't thought about this part.  What do you do after the shot?  Do you run right up there and check it out?  Do you wait?
As I sat there and pondered these things I lifted the rifle to look at the deer through the scope.  He had fallen into some taller grass So all I could see was a patch of brown in the middle of some lighter brown and tan patches.  He must be dead.  I'm gonna go check him out.  I set the rifle down and stood up.  Stretched my arms and back out.  I looked over in the direction of the deer and what I seen set my heart to racing, again.
He was staring right back at me.  He wasn't dead as I had thought.  Quickly I sat down.  Snatched the rifle from its leaning position on the front of the hollowed out pile of sticks.  I was shaking all over.  Worse than when the deer first appeared.  I put the rifle to my shoulder again.  Damn!  I couldn't see him from the sitting position.
With the rifle at my shoulder I started to rise from my seat.  Trying to keep the deer, or what I thought was the deer, in my scope.  That was enough for the buck.  He began to scramble and thrash around in the grass.  I stood up completely and tried to locate him through the scope.  It was a mad pile of grass, hooves and snow flying everywhere.

Next thing I know the buck has pushed his way out of the grass and was laying there on his belly, head in the air looking straight at me.  I shouldered the rifle once again.  He was in the wide open, broadside at about 40 yards.  I steadied the crosshairs right behind his front shoulder and pulled the trigger.
Nothing.
I squeezed harder.  Nothing.
I pulled the rifle from my shoulder and checked the action.  The next shell in line had jammed in the action of Grandpa's rusty old 30-06.  (notice I left the trusty part out)
I reached down and began to quietly unjam the rifle.  Nearly impossible.  The entire time the buck is staring at me.  Before I can unjam the rifle he has taken off.  His rear end is up in the air like normal but his front shoulders are in the snow.  He is pushing himself with his rear legs only.  His chest is like a sled in the snow.
I finally unjam the rifle and jump from the blind hoping to get a shot at him as he makes it into the brush.
No luck.  He is out of sight within seconds.  Leaving only a furrow in the snow from his chest that is stained with a crimson streaks.

At this point I'm a wreck.  15 years old, by myself with no experience whatsoever.  I did the only thing I could think of, head for Dad.
Unfortunately Dad is hunting down by the lake.  I am at the creek.  The distance between the two is (now with awesome mapping tools and topographic maps is 4558 feet away which is 722 feet away from a mile)
quite the hike.
Years later I look back on this and the best thing would have been to sit quietly and wait for Dad to show up with the vehicle and pick me up.  However in my maniacal state of mind, crazed with buck fever and the notion that if I didn't recover this deer immediately some other hunter would claim my prize.  In my mind those antlers were growing by the minute.  This buck was huge.  Elk like antlers protruding high into the sky.  I was going to be a deer camp legend.  I had to recover this buck.

I frantically scrambled my way down the bank, sloshed through the creek, soaking my bright orange hunting suit from the thighs down.  This alone added 20 pounds of extra weight.  I made it to the two track and began running towards the lake.  I didn't realize how far it was but luckily I was young and running like a crazed lunatic through the north woods didn't faze me a bit.
I reached the truck with the best hunting minutes of the day yet to be used.  The twilight hour where most deer began to move.  Every hunters favorite time of day.  I couldn't wait for Dad to emerge from the woods on his own.  I knew better than to go looking for him.  Running down a two track is one thing.  Fumbling about in the woods while hunters are on edge with loaded rifles is another.  So I opened the door of the truck and laid on the horn.  The noise was deafening in the still of the twilight.  Beeeeeeeeeep!  Beep, Beep, Beep!

Eventually my Father and Brother emerged from the woods with scowls on their face.  ''What the hell are you doing?", they asked me.  In a frantic, stumbling voice I recanted every detail in about 12 seconds.  Probably reminiscent of Ralphy from the Christmas Story telling Santa about his red ryder BB gun seconds before he gets a foot in the face pushing him down the slide.  My foot in the face was Dad telling me OK settle down.  We will go back to camp, have supper and come back out with some flash lights to look for him later.
This was unacceptable.  I was not a happy hunter.  Looking back it was the only logical thing to do.  Give the deer time to expire on his own accord and not push him to the next county but in my mind it was utter horror!

We did go back out.  The entire camp was with us.  We tracked that deer for probably two miles in the snow.  At first the trail was easy to follow.  That furrow in the snow.  It was a foot deep and 18" across with blood in it.  However, soon the furrow began to disappear in spots.  The deer was standing up on 4 legs again.  Every once in awhile the furrow would return but eventually we were down to just deer tracks.  The blood quit showing up and at the end of our tracking adventure the deer was running in leaps and bounds as evidenced by the 10 foot gap in between his hoof prints.  We gave up the trail shortly thereafter.  I was devastated.  Dad said I had probably just clipped the front shoulders with the bullet and because he was so close the bullet had enough shock to knock him senseless for a few minutes.  Numbing his front legs causing him to push himself toboggan style for awhile..  eventually as the shock wore off the deer was able to regain his facilities and would probably make a full recovery.

That was my first deer.  No I never actually killed him but he will always be my first.  The very next day I returned to the same blind and shot a small buck.  I was happy but that first one with the tree like antlers and moose like body......well he got the best of me that day.  That was 24 years ago.  That old buck is long gone.  The pile of sticks that made up that blind has made its way back into the earth.  I believe his spirit still walks through the woods up there.  About 10-11 years ago I seen a big buck walking through the fog and rain within a stones throw of where I met that buck the first time.  I believe it may have been him.
I'll be back in a few days.  I only hope I get the chance to meet him one more time. 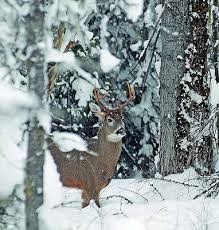