"Don't let me forget the ice", he said to her as they made their way across the parking lot to the grocery store.
"I won't for the 10th time already, sheesh!", she answered him.
They hustled and shoved their way through the crowds of holiday shoppers.  Everyone rushing around, picking up last minute gifts and the forgotten ingredients for their Christmas dinners.
A mad house, a plethora of heavy winter coats, red scarves and the jingle of the bells by the frozen Salvation Army volunteer.
A sign outside the store advertised the store hours.  Not many chances left before they shut down.  He needed to get everything on this one trip.  Ne did not want to risk another venture into this cash swallowing monster.

As their vehicle pulled out of the lot and headed down the road towards home he smiled.  This was going to be a great three weeks.  No work until January 13th.  So much fun to be had.  To kick it all off was tonight's annual Christmas party with all of their friends.

Halfway home he reached for the windshield wiper control.  It had begun to rain.
Pulling into the driveway the rain had picked up just a tad and they scurried to get their groceries in the house.
"Damn", he yelled.  "I forgot the ice".

It turns out he didn't need any ice at all.
-----------------------------------------
The rain eventually turned into freezing rain and the entire area was saturated with an icy coat of power cutting, tree crushing misery.
We had a few people show for our party but most stayed home due to the road conditions.  We had fun anyways.  A big spiral ham, Rachel's homemade artichoke dip, Sandy's toast delights and Momma's ham pinwheels.  Of course I made the obligatory bowl of party punch which contained assorted juices, pineapple rum, vodka and slices of strawberries, chunks of pineapple, kiwi and star fruit.

Fat from all the food and warmed by the free flowing adult beverages it was a fun night albeit a short night due to weather but fun nonetheless.  Afterwards I cleaned up a few things but decided to finish the rest in the morning.  I was ready for bed.
I should have finished!
Around 2 AM the power went out.  It's still out.  I'm running on a borrowed generator and praying that the people I borrowed the gennie from don't lose their power.
Estimates of around a 1/4 million people without power.
There are trees down everywhere, power lines lay strewn across the roads and yellow caution tape is all that separates you from instant death.  It is a mess!
I have some pictures and a video (if it works).  I feel extremely fortunate to have heat and power.  So glad we put in this wood stove.  Our next purchase is going to be a generator.  We lose power way too often.

The ice storm was followed by some snow accumulations and it is quite breathtaking. Except everytime the wind blows more trees come crashing down. 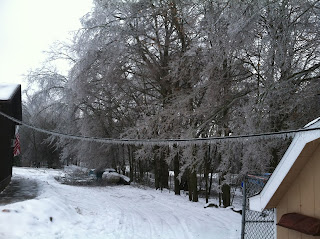 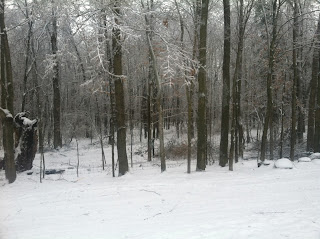 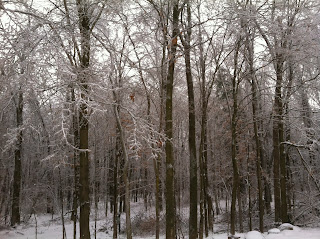 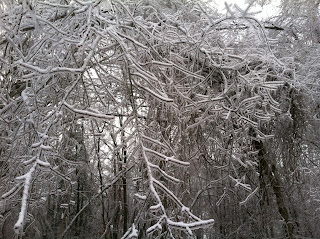 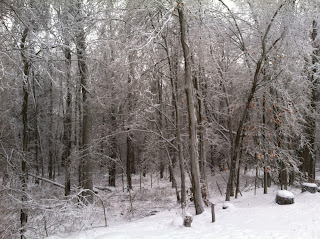 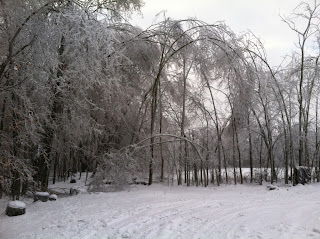 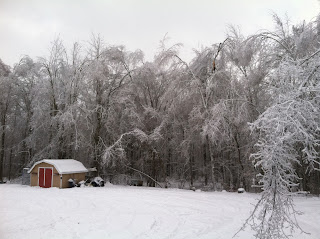 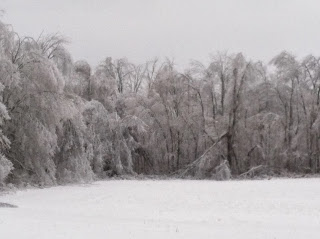 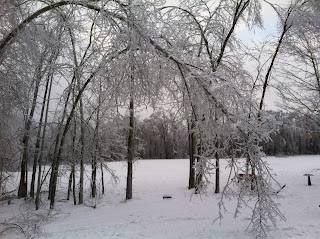 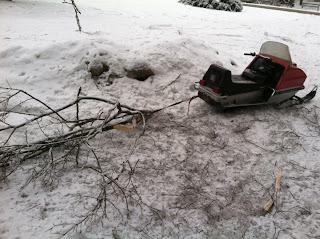 I used the Arctic Cat to haul the brush to the burn pile.
Click below for video

I'm not sure why the video is a little blurry.  Maybe had some condensation on the lense.

So that is it for now.  We are hosting Christmas dinner here tomorrow.  I have a big ham, a 5 pound prime rib and numerous other goodies to go with it.  Hopefully the generator can withstand all the cooking.
I have it wired directly into the 220 volt breaker in my fuse panel.  I had to drive almost an hour away to find a 30 amp 220V plug to fit the generator so I could run the well and the stove.  Everyone was sold out of anything generator related.

I hope you all have a Merry Christmas!  It should be pretty fun around here.
Everything is an adventure if you want it to be!!!!

Posted by Bushman at 9:04 AM
Email ThisBlogThis!Share to TwitterShare to FacebookShare to Pinterest