Amidst the Snow and Ice He Rests

The wind blew fiercely at the single pane window.  Rattling it, knocking as if to come in.  The house shook with the intensity of the gale forces at hand.  Snow whipped itself into a fury and screamed in rage at being denied entrance.  The icy cold grip on the house grew stronger as crystals began to form in the corners of the glass.
The man inside eyed the windows cautiously, he wasn't certain they would hold up to such devilish weather.
He descended the 12 steps to the lower level slowly, a hand gripping the rail at all times.  White knuckles portrayed a weakness that only the railing could hold.  Step by step he descended.  On the 9th step he stopped.  He was dizzy and beginning to sweat.  Minutes rolled by as the fury of the storm increased.

Rested, he finished his descent and crossed the wooden floor to the wood stove on the other end of the room.  Carefully he knelt down to avoid a sudden dizzy spell.  He was alone and the last thing he needed was to fall head first into the fire.  He opened the door and the flush of heat greeted him with a fierce loyalty that only he could know.   Sweat beaded his brow with the new wave of heat.  He removed a few logs from the piles stacked on either side of the stove.  Carefully he placed them into the firebox.  Situating them perfectly to attain a premium burn.  The precise combination of heat and longevity.  Once finished he closed the doors and made his way back upstairs.

It really sucks being sick.  I started to feel a tightness in my chest on Thursday and knew what was about to happen.  I haven't been sick in a few years so I was due.  I spent all day yesterday on the couch.  I was running a fever most of the day and it began to subside in the evening.  Today I am just slightly over temp but any movement or just a sip of coffee has me breaking out in sweats again.  Dizziness, burning chest congestion and awful body aches.  I have never had such body aches as this bug has given me.
So I have to medicate myself carefully with cold medicine and a combination of acetaminophen and ibuprofen to control the fever.  I'm just glad it's the weekend and I don't have to miss work.  No way could I work like this.
Haven't been doing much as of late.  Sorta hunkering down as winter has its way with us.  Whipping winds are blowing snow into huge drifts, below zero temps make anything outside unbearable.  Today we are getting more snow.  No wood cutting because I can't get back to the wood lot.  Heck I can't even get to my own woodstacks.  The last 2 weeks I have got my truck stuck just trying to bring in my weekly load of wood.
I've just about had it with this winter.  Winter is usually enjoyable for me but this stuff is just brutal.  Not a normal winter by any means.  I just hope it straightens up so we can enjoy the last few weeks of it.
I have burned quite a lot of wood this year and I really need to bolster my supplies for the next few years.
On a great sidenote now that we have this wood stove and it heats our entire house I don't have to buy propane to run the furnace.  With this terrible winter the price of propane has skyrocketed from $1.69 to $4.99 a gallon.  They are also setting a max fill of only 150 gallons.  $748.50 for 150 gallons should be criminal.  You can fill your entire tank for that much in a normal year!  Like I said, I'm grateful as all get out.

I have already been browsing the garden catalogs.  I plan on starting some of my plants even earlier this year.  Like my peppers.  Last year I had such a great harvest but it was so late in the year I didn't get the full benefits of them. 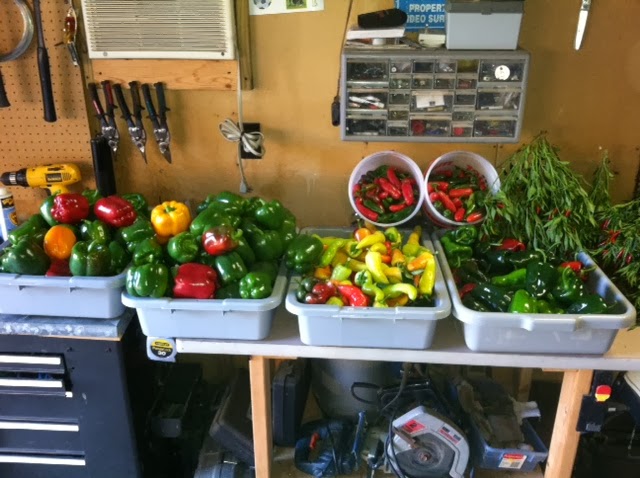 We have a ton of stuff to get done in the next few months.  Once this sickness passes it will be time to get it started.  Spring will be here before you know it!

With the extra cold temps I decided to bring in more than normal wood supply for the week.
Something else to add to the list....finish off the brick! 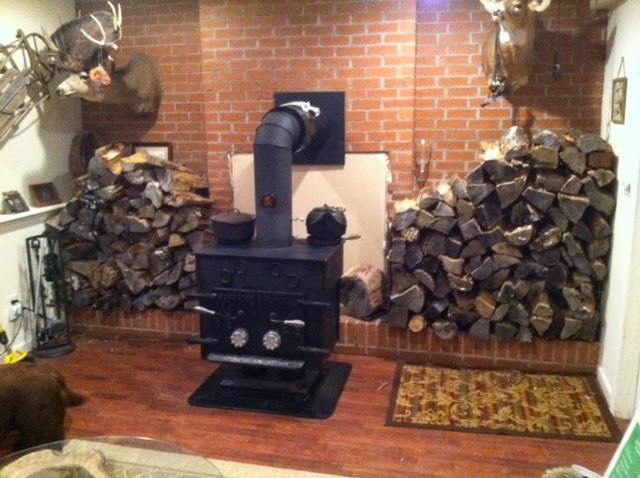 That is it for now.  Haven't worked on the book much.  I really need to commit or shelf it for now.
I've just been so tired it's hard to write.  Like you couldn't tell.  Not much blogging going on either!
I'll try harder,
Later
Bushman

Posted by Bushman at 7:21 AM
Email ThisBlogThis!Share to TwitterShare to FacebookShare to Pinterest