So yesterday morning started out quite normal.  Awake at 4:30 and outside in the bitter cold taking care of my cursed animals sweet lovable pets.  Building a fire and waiting patiently while it coaled out enough to shut the doors and leave it unattended (15 min).  Finally securing a hot cup of coffee and tucking myself into the couch cushions with my laptop.  A typical weekend morning for me.
Momma awoke and jumped in the shower.  She had to go to work on a Saturday because they were moving her office and she had to unpack everything.
Of course I was on my 5th cuppa and well nature came a calling.  I didn't want to bless my wife with the rituals of my morning so I went downstairs to my daughters cluttered death-hole bathroom.  She wasn't home anyways!  Without getting to graphic I reached back for a courtesy flush and a second later felt water on my bare feet.  WTF?

Well it turns out that the wax ring under the toilet had been leaking and to make matters worse the person that we bought the house from had installed a floating vinyl floor over the existing linoleum.  I believe the toilet had been leaking for awhile but the water had been going in between the two vinyl floors.  Weirdest thing I ever seen in my years of house remodeling.
Well that water seeped between the floors and made its way to the drywall and began climbing up the drywall.  When I removed the toilet you could see how the drywall was rippled from the moisture.  It had reached almost to the top of the toilet.  (One more reason we didn't notice it because it was hidden behind the toilet.)  The water had reached the baseboard trim and had penetrated the drywall behind it.  There was a lot of mold hiding behind the trim work.
It's hard to believe that we wouldn't notice it but I think because it is Kait's bathroom and the doors are always closed is one reason.  The fact that she is a girl and her bathroom always smells like shampoo and perfume is another.  Also this morning I was talking to her about how I felt the water on my feet is how I noticed it and she said she always stands up,flushes and immediately walks away so she would have never felt it on her feet.
The water only went so far from the toilet before draining back toward the base.  If your feet were not right next to it for a few seconds after the flush you would never know it.  Another main reason is the lighting in the bathroom is terrible.  The only lights are the ones that are above the vanity and the toilet is all in shadows.
Sort of the "perfect storm"!

So I peeled up all the vinyl tiles as well as the linoleum.  Removed all the baseboard trim.  Ripped out the entire closet and shelves.  Removed the drywall from 2 of the walls and cut the bottom portion of one salvageable wall.  I still need to remove the entire sheet of drywall from behind the toilet.
Then I decided if I was going to remodel half the bathroom I might as well remodel it all.  So I ripped down the drop ceiling and all the tracking.  Next step is to remove the existing vanity and top and replace that as well.
I discovered that the framed wall behind the toilet and closet was not built correctly.  It is attached to the concrete floor but not to the floor joists above so you can actually wiggle the entire wall.  So today I will reframe those walls as well as frame in the ceiling and furnace trunkline to support the new drywall ceiling.
I will install a new vent/light next to the shower and vent it outside( the old vent simply vented up above the drop ceiling) also recessed lights above the sink.
I need to make sure the 2x4s that are sitting on the concrete are completely dried out before closing them back in with drywall and trim.  It will be a few days of having a fan blowing directly on them before they are dry.
I will not put the closet back in as this bathroom is quite small to begin with and leaving it out opens up the room a bit.  I think a couple corner shelves will be just fine.  I will make sure they match the vanity.
I found some ceramic tile for the floor that I like.  Three different sizes of tile will give it a more custom look.  6", 12" and 18" tile.  Randomly set.

I was complaining of being bored but really didn't need this!  We just paid off all our credit cards too!  LOL
We went from replacing a $4 wax ring on the toilet to a $700 bathroom remodel!


In this pic you can see the closet as well as the floating tiles.  The hole is where the toilet was. 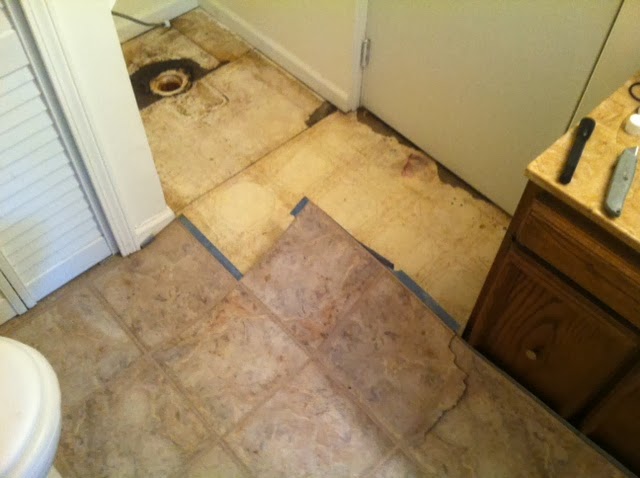 The hammer is lifting up the tiles.  There was a film of water under all of these 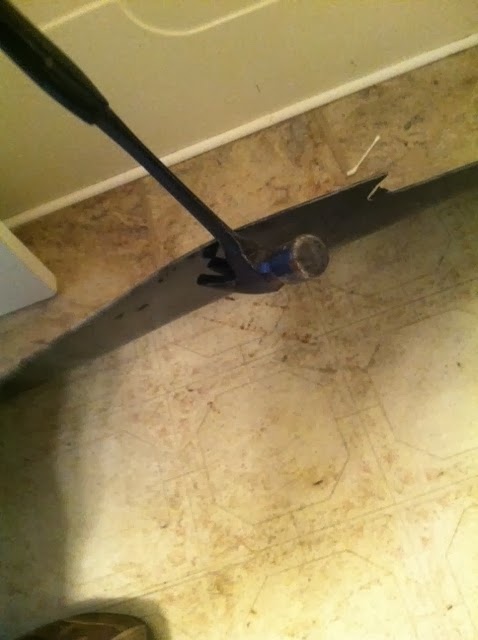 The closet is ripped out. 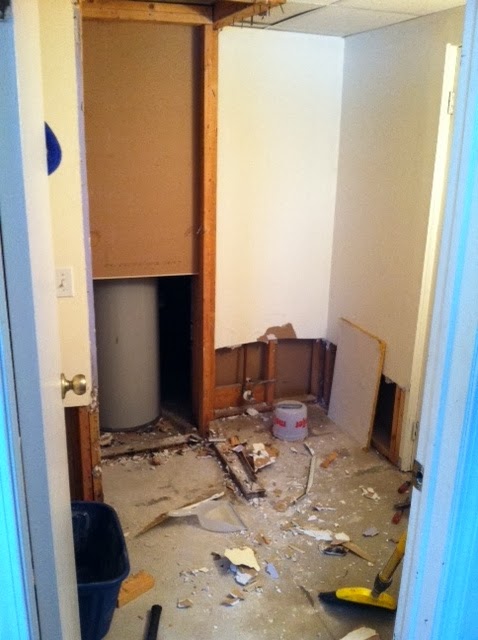 Sill plate removed from the old closet wall.  You can see the mark on the floor where it was.  The section of wall on the right I will just replace the missing piece of drywall.  The back wall will get totally replaced. 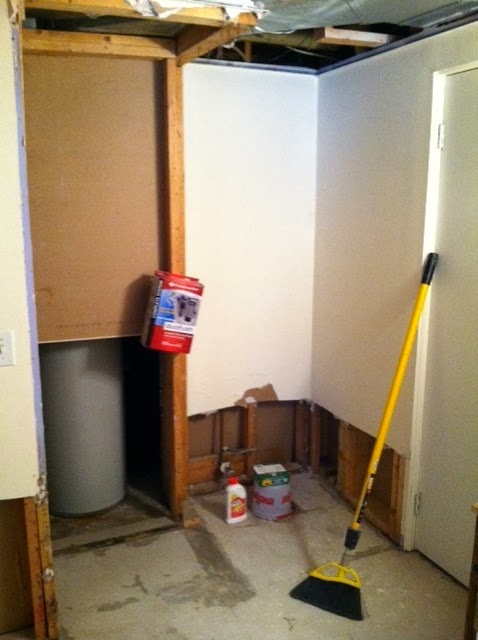 The package hanging on the wall above is the new flusher system for the toilet.  It is a water conserving one that works by lifting the flush lever for a half volume flush (pee) and pushing the lever down for a full volume flush (poo).  It was about $30 more than a standard flush but well worth it.  Saves water, saves electricity by not having the pump run for a full tanks worth and also is easier on the septic system.

Time to go!  I have to run to town for the recessed lights and the vent/light so I can get the ceiling framed in today.

Posted by Bushman at 11:53 AM
Email ThisBlogThis!Share to TwitterShare to FacebookShare to Pinterest