Springing Into a New Beginning

Spring is here, the snow has almost departed completely.  A few piles remain steadfast but their existence is futile.  My backyard is almost entirely clear.  The wretched winter has left the yard war torn and in shambles.  The ice storm has littered the ground with every shape and size stick or branch possible and in one case an entire limb.  The grass has been pummeled by the thick slabs of packed snow which over winter formed a mini glacier across my one acre.  Frequent galavanting on the snowmobile hardened it even more.
But alas it has released its grip.  Soon the cleanup will begin.
The one thing about spring that I don't like is how soft the ground is.  The dogs, if let be, will run around and tear chunks of sod up with every step so there is no chasing the ball or frisbee.  Poor Remmi has been hounding me every minute.  His expression is priceless. "Please Papa just throw the ball ONE time, just once Papa!"

Planting is just a mere 6 or 7 weeks away and I have already started my seeds indoors.  I made a quick and simple little starting house in the downstairs den.  I chose this location because it is the same room with the woodstove.  Keeps them nice and warm.  I started them Sunday night.  I used mostly leftover seeds from what I purchased last year and a few from new seed packets this year.  Currently I have 72 cells which I have planted seeds in.  Almost half of them have already germinated.  Tomatoes mostly.  That is a new record for me.  Thursday morning I noticed them before I went to work.  Not even 4 full days after sowing!

I will not be doing as many vegetable starts as I did last year.  I have enough planted to cover my garden, a backup for everything I do plant in my garden and then a few leftover that I can pick and choose from when selecting so I get the healthiest plants.  Whatever is leftover I will most likely give to my friends who have helped me or loaned me things in the past year.  Not too many people borrow things from me but I am an avid borrower so it's nice to give back a little.  Last year I grew a lot of plants and sold them to offset the cost of my new garden, the seeds, soil etc..  This year the costs of gardening will be minimal and I can give them away.  Money is nice but the feeling you get from giving is way better than the feeling you get from getting!

I throw a blanket over the whole thing to hold the heat and also have a heating pad under the tray.  The dome keeps the moisture in while the seeds germinate.  Now that some have germinated and others have not I need to remove the new seedlings and place them on the first shelf without a dome otherwise they will dampen off and die.  Once the rest germinate then the domes will be used for the next round of germination which will be a couple flats of flowers. 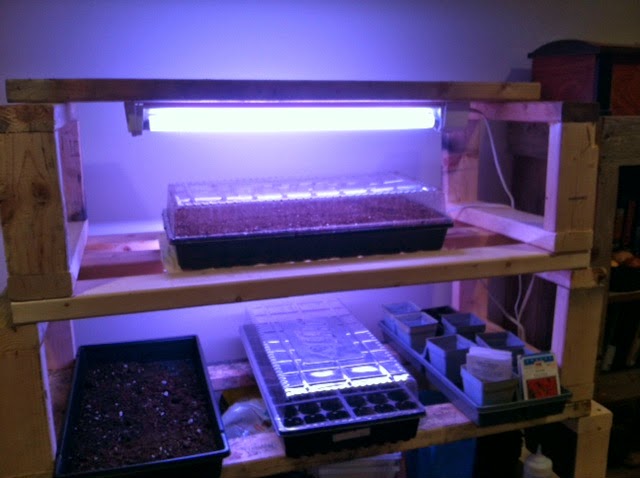 I have a digital thermometer placed on the soil.  Many seeds need warm soil to germinate as in the case of peppers.  75-80 degrees.  The heating pad helps with that. 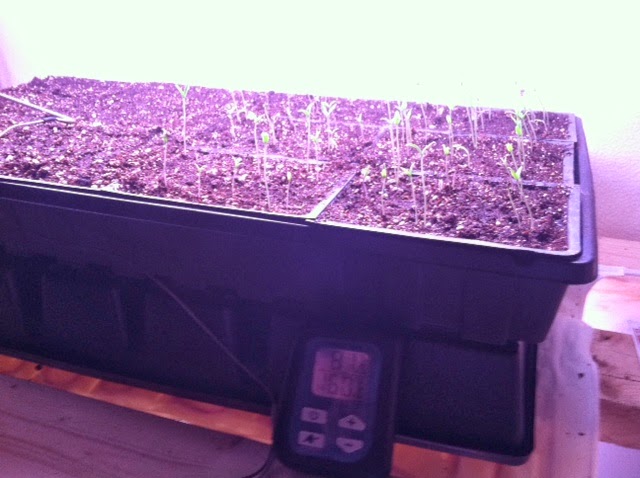 If you compare the two pics you will notice that I have elevated the original flat off of the heat pad.  After a day or so I noticed that the soil temps were too high sitting directly on the heat pad so I inverted an empty flat and placed that on the pad and then the vegetable flat on top of that.  The empty, upside down flat now acts as an air insulated warmer for the upper flat.  The pad heats the air in between instead of the soil directly.  This picture has the temp reading 81 degrees on top of the soil.  Almost perfect.  Once the seedlings grow a little more I will drop the heat down to 70-75.

So this year I decided to use a pre-fertilized potting mix and a seed starting medium.  What I did  was take a bag of potting mix, the one that says 'will feed for up to 3 months' on the side and I filled my trays with it.  I wet them down and then pressed the soil with my finger to remove air pockets.  Then I dropped my seeds on top of that and then covered them with 1/4" to 1/2" of the seed starting mix.  I needed the seed mix to let the seeds germinate in the right environment with all the air, light and heat that the seed starting mix allows the seed to receive.  However once the seed germinates and begins sending out roots it will hit that potting soil blend and have all the nutrients it needs to promote a healthy growth.  Soon after I will be able to transplant into a larger container with all potting soil.  I hope it works.
I did pick up a few new tomato blends this year.  The peppers I kept the same as last year as they were such a beautiful crop.  Best peppers I have ever grown!  here is a pic to prove it! 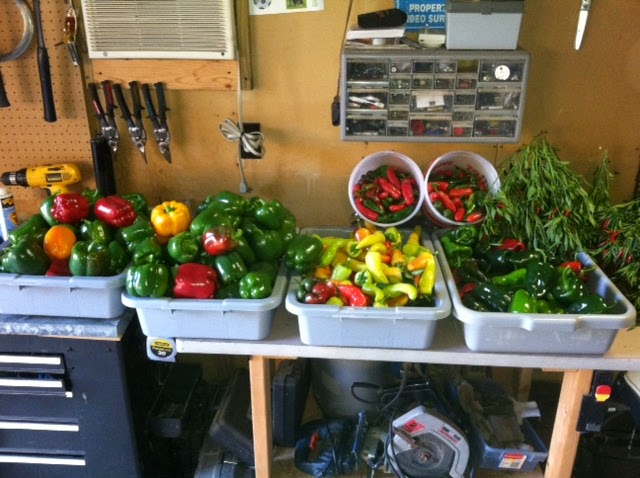 Here are the flowers I will be growing again.  Zinnias.  Last year they were so awesome.  I did save a lot of the seeds from the heads of these flowers and I scattered them around the property last fall.  It will be amazing if they come up this year.  I hope so! 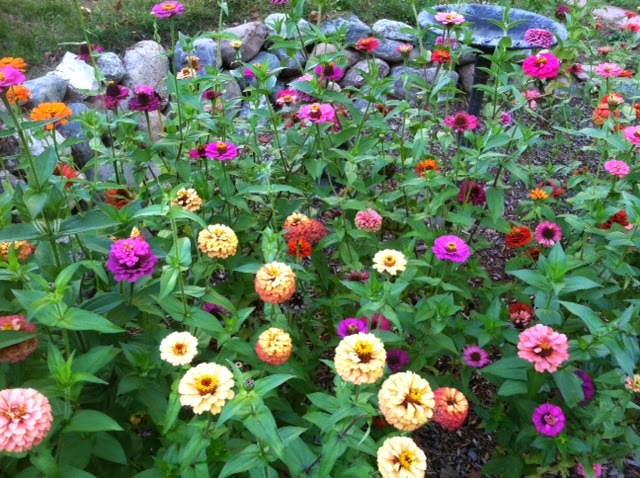