Magic in the Garden

"I reckon it'll have to do", he said dejectedly.
The figure in the red pants and yellow checkered shirt stared at him blankly.  For two years he had stood by his side.  Coaxing him on towards his final glory and now, when things were looking up, he wanted to call it quits?  To settle for less than perfection?  This would not do, this would not do at all.

"I think I'll call it a day, it's getting hot", the man said again with a sigh.  He kicked a clod of dirt with the toe of his grass stained sneaker and looked skyward.  A crow floated high above in the warm air currents flying in lazy, looping circles.  Watching and waiting.  Taunting him, begging him to step away for just one minute.

He brought his gaze back to earth and swiveled his head eyeing his companion, eyes squinted almost shut, blocking out the glaring sunlight, "you know he ain't afraid of you, don't you?".
The figure in the red pants stared politely back at him.  His straw hat pulled down tightly, shielding his face from the sun's rays.  A never ending smile perched upon his lips.  Oh the things he wanted to say to the man who stood before him.  The stories he could tell, the things he had seen while the man was away.  Yet he remained steadfast and silent.  No words would flow from him, not today.  Maybe not ever.  The magic was not strong enough to pull him into the realm where the man lived.  So he just smiled.

The man shook his head,"I don't know why I even talk to you.  You just stand there with that silly grin."

The man bent back over his hoe and began to work the garden soil again.  Sweat beaded on his brow and an occasional grunt slipped from his pursed lips as he encountered lumps of hard clay that needed to be broke up into manageable bits.  The sound of the hoe slicing through the soil mixed with the lightest of pings when it made contact with a stone was enchanting, the rhythm was soothing and it made its own music. Music which strengthened the magic.
The figure in the red pants smiled on as he watched his friend work the garden over.  He was glad it was spring.  Too many months had gone by without any contact.  The cold biting winds of winter had been hard to bear.  Yet he stood his ground waiting for just this moment when the world would right itself and the magic would begin to grow again.

He hoped one day the magic of the garden would be strong enough to bring him full life.  He wanted to run and play with the little yellow dog that lived here.  To laugh and to have conversations with the man when he came out in the morning to sit in the garden and have his coffee.  To whisper aloud to the moon as she watched over him from high in the night sky. One day, he kept reminding himself, one day the magic would be strong enough.

The man with the hoe continued to work the soil, attuned to the task at hand he did not notice the tear that slipped down the wooden cheek of his garden companion.

The magic was building. 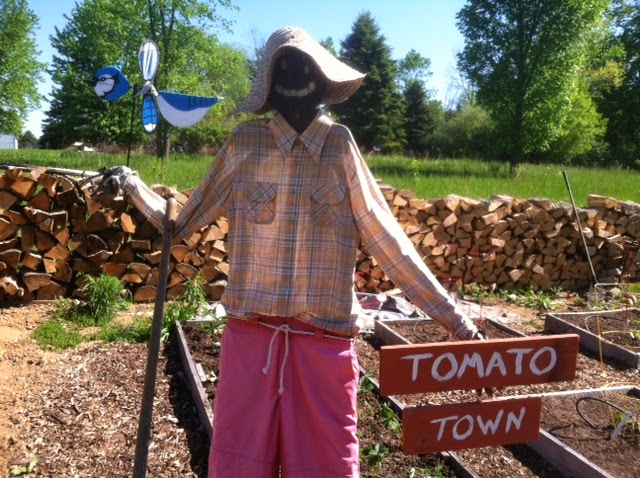 Posted by Bushman at 10:38 AM
Email ThisBlogThis!Share to TwitterShare to FacebookShare to Pinterest