Thick impenetrable brush filled the edge of the forest.  A jumble of dead limbs and branches lay strewn everywhere, snared by entwining vines they were choked to death and lay hapless among half rotten, moss covered logs.   Sunlight, a rare commodity on the forest floor, graced the outside edges and any seed that fell grew voraciously in the dank leaf litter that, over the years, rotted and worked its way into the soil creating a rich layer of humus.  Poison ivy grew tall and thick in this zone.  The ivy, warden of the interior, created a barrier of toxic resins that would leave any trespasser miserable for days on end.  Three steps past the ivy was a tangled wall of brambles and wild blackberries.  Their razor sharp thorns, hungry for blood, slashed and cut without prejudice.  They held the beauty of the interior for ransom and the price was blood.

The interior was dark and soft.  Emerald mosses covered the boulders that lay half buried in the ground, their tops emerging from the mosses as if to sip the cool, earthy air.  Small fungi dotted the floor, their whiteness a sharp contrast to the dark soil and the black rotting logs.  Graceful ferns swayed in the gentle breeze that filtered through occasionally and little white flowers peeked from in between the fronds as they danced.
The tranquility was serene, the silence was loud.

This was his favorite spot.  Braving the guardians at the edge he would slip past.  The admission price was usually the same, a few scratches from the brambles, sometimes a few spots of poison ivy.  One time, a bout of nasty stings as a nest of yellow jackets had burrowed into the ground just past the poison ivy.  They were relentless in their attack and by the time he had made it out he was covered in little red welts and the thorns from the brambles were stuck deep into into his legs.  Each one, removed with tweezers, created a drop of dark crimson blood..  The poison ivy arrived the next day sending him into an itching frenzy.

It was the interior of the woods he desired to replicate.  So one day he took out his tools and he went to work.  He slashed and cut with a fury at the villians. Their defenses were strong but his weapons were much more technologically advanced.  The war was long and arduous and it seemed as though they might end up in a stalemate when he finally broke through.

Sweat trickled into his eyes blurring his vision as he surveyed the war torn battleground.  The casualties lay in heaps, scattered everywhere.  He piled the remains and burned them, careful to stay out of the hazardous smoke.  It was done.  He had won.  Now he could begin the rebuilding.  With the enemies annihilated the forest could once more be enjoyed as it was meant to be.  A wonderland of  ferns and moss.  Of  fungi and leaf litter.  A serene place to sit and contemplate the world.   A place from long ago before man had created the snarled edges with his plow.
-----------------

And that is just what I did.  I'm a little sore and beat up this morning but I feel like I actually won an important battle.  Over the last few years I have been working at cleaning up the edges of my property.  I had one particular spot left.  It was thick and nasty.  Last year I couldn't even get into it because of all the mosquitoes.  It was awful.  This year is different.

So yesterday after getting home from work at noon I grabbed the pruners, the weed whip and the chainsaw and went to work.  I began clearing out all of the obnoxious plants that live on the edge of this little strip of woods.  Once that was clean I went through and removed all of the tree debris that had fallen over the last few years from the storms and a few trees dying.  Then I began to selectively cut down some of the trees from the interior.  Mostly small ones that were doing nothing but cluttering up the strip.  I cut down some dead trees and also a bunch of saplings.  All of this I piled on a stump and lit on fire.  I worked until 8:00 pm last night.  It looks pretty good.  I still have a lot to do but I was running out of time (and I was purdy whipped).  Here are a couple pics.

I had imagined this corner of the yard as a shade garden built into the edge of the woods.  A place to sit quietly and read or write or just relax.  It has been an immense task cleaning it up.  When I moved in you couldn't even see through the trees to the meadow behind it.  There was a giant pile of concrete hiding in all the brush that I made a little wall out of.  It is currently being overrun by moss and in a few years you won't even know it is concrete.  The table and chairs I put in 2 years ago after an initial attempt at cleaning the first edge of it. 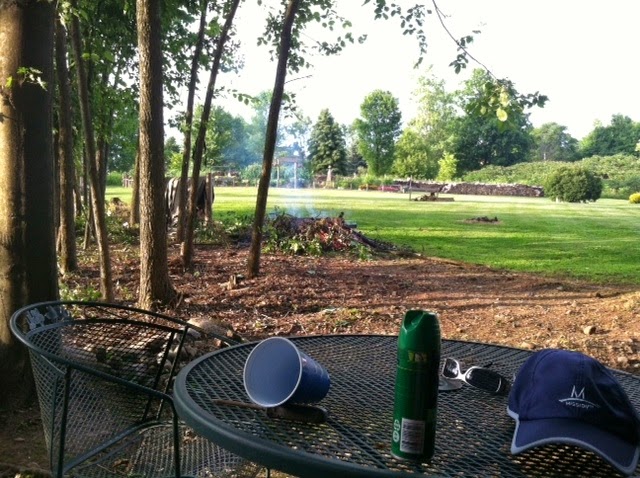 This view is along the south side which I cleaned out 2 years ago.  There are giant boulders everywhere.  They will be great focal points in the new shade gardens. 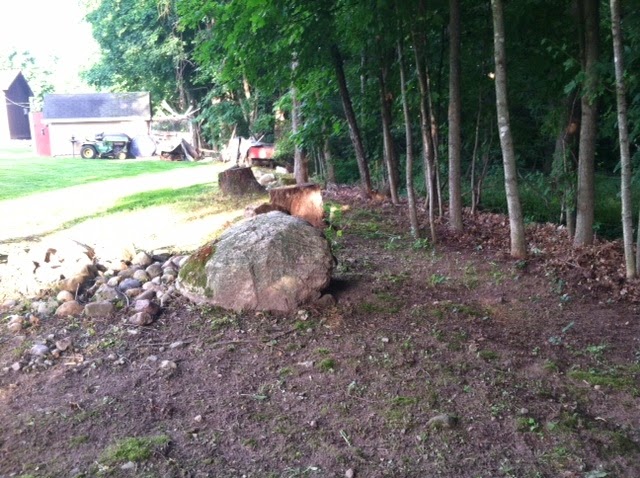 This is the treed area I cleaned out.  Before you couldn't see through it. 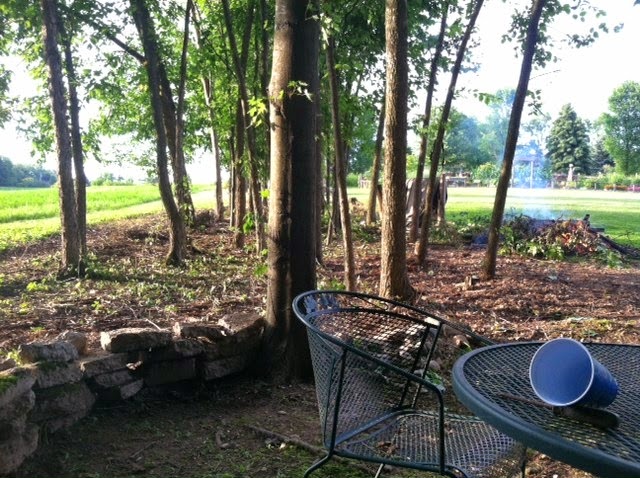 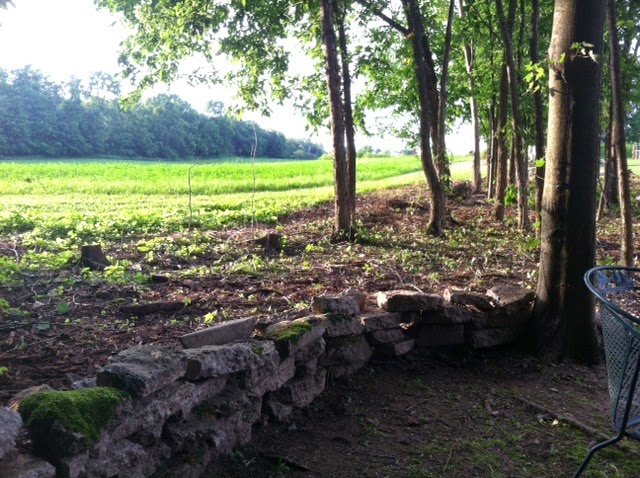 Burning the casualties of war 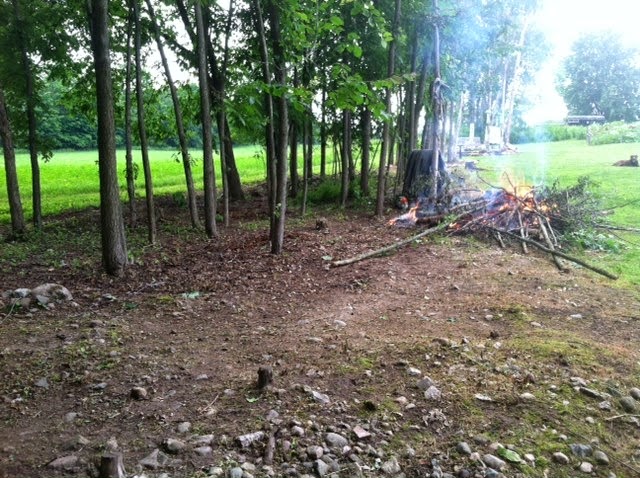 A shot from my deck 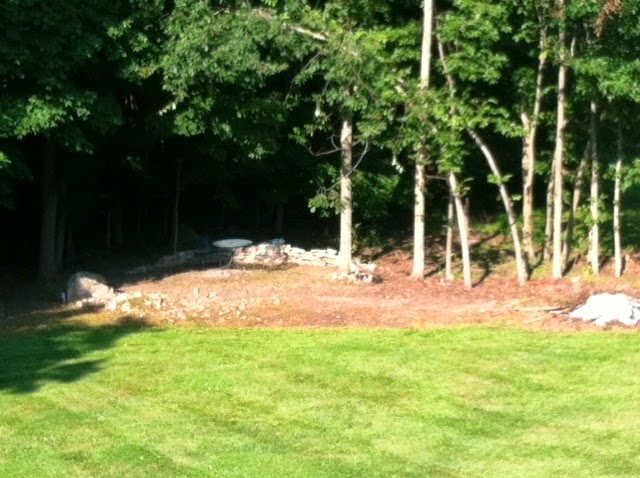 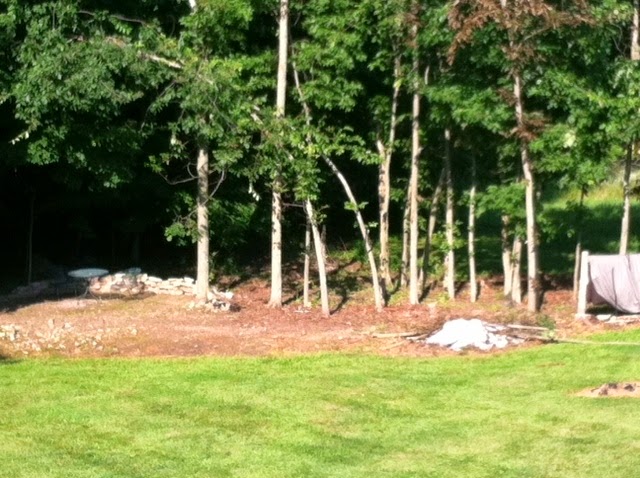 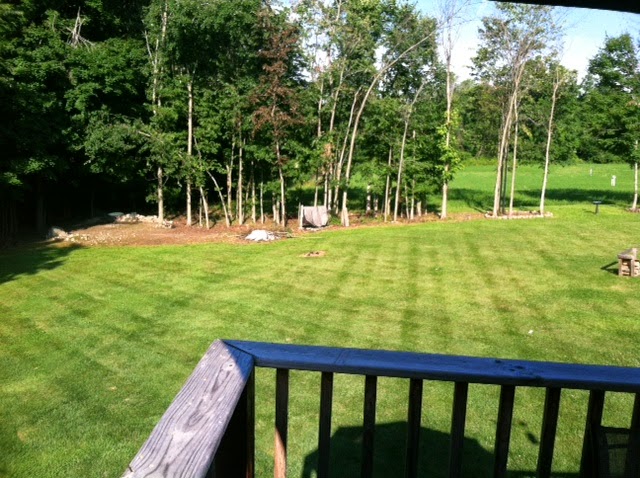 I dug through the old files from a about 200 blogs ago and found these old pics of the before. 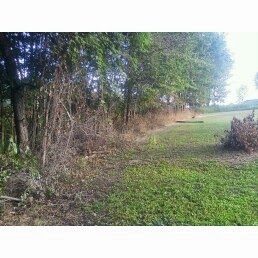 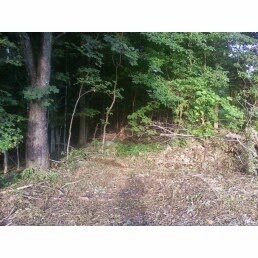 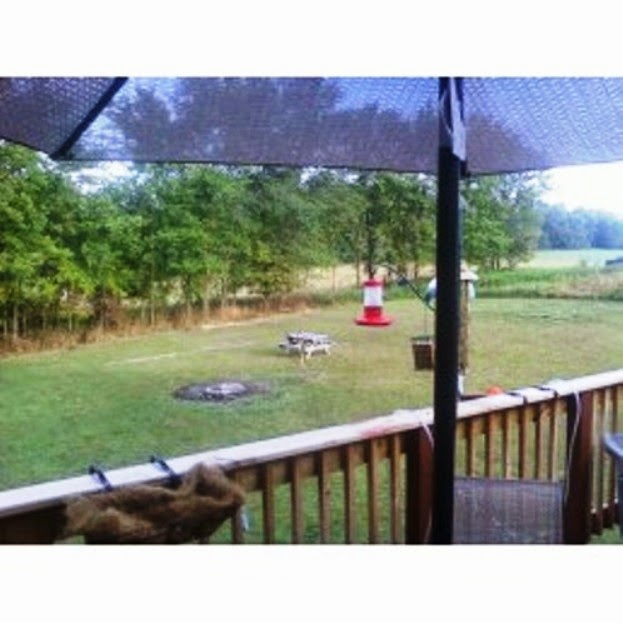 That's all for now.  I'll see ya soon!
-Bushman

Posted by Bushman at 9:48 AM
Email ThisBlogThis!Share to TwitterShare to FacebookShare to Pinterest