A Fire in the Night

Firelight flickered, reds and oranges danced in time with the darkness, while the blues and whites preferred to stay to themselves deep in the center.  They swirled their colors around the flames as if it were a dress on a ballroom floor.

The pops and cracks of the fire were soft and subtle.  Quietly appreciating the silence of the night and embracing her sleek stealth, not willing to break the music of her silence.

In their soft flickering, the flames illuminated the smooth round stones that surrounded them.  Pulled deep from the earth's cold grasp by some enormous force they lay at the edge of the cold, clear creek where years and years of rushing water had softened their edges, shaping and polishing them into the shapes they now held.  The water had brought out their true colors and the firelight enhanced them. Blue and grey, white and red.  It was if fate and destiny had combined them for this purpose alone.

Holding close to the fire, the stones watched her dance and slowly released the warmth into a spreading circle which reached into the night, beckoning and drawing near all within it's reach.

Outside of the warmth of the stones the ground sloped gently away.  Tall brown grasses moved ever so slightly in the night.  Illuminated only slightly by the reach of the fire.  Their greens, long ago tucked into bed for the winter, dreaming of spring and a return to warm sunshine.  Poplar saplings mingled with the grasses.  Ever vigilant in their race for the sun.  These too slept the winter away. Soft brown buds clung to their slender trunks waiting patiently for spring.

The ground beyond the grasses and saplings began to descend sharply and took the shape of a small creek bed filled with more stones and gravel.  The  cold, spring fed waters babbled quietly in the night.  Moonlight reflected off its ripples creating small crescents of lights.  They appeared to smile up at the night sky.  Tucked  halfway into the overhang of the sandy bank a small brook trout waited for dawn. Even the faintest colors of red upon its side caught the moonlight and twinkled in the dark.

The air was fresh and cold, the smell of the forest enveloped the senses.
Fresh earth and the slender needles of the white pine combined with the pungent smell of decaying leaf matter and the sage like smell of the ferns to create a heavenly perfume that exhilarated the senses.  A slight wisp of wood smoke added a nobility to the evening.

Beyond the glow of firelight the forest deepened into blackness where towering pines and gnarled oaks slept in peace.  Poplar groves stood stark in there slender contrast to the giant beech trees which commanded the attention of the all who passed by.  Their immensity only outdone by the enormity of the cloaking night.

It was among these trees where the animals of the forest lived.  One in particular roamed these brush filled draws and steep wooded ridges.  His keen eyesight gave him the ultimate advantage at night and his sense of smell conquered the day.  High up on a ridge he stood.  Lean and proud he raised his nose into the night air smelling for danger.  Wood smoke, they were back.

He made his way down the ridge for a closer look.  Through the trees he could just make out the faint light at the end of the sandy trail.  Creeping closer he stood within 50 yards of the fire.  He counted 4 of the uprights.  They talked quietly in the night.  Telling tales of the hunt and the hopefulness of great success for this year.  He bounded away into the blackness leaving only his tracks in the sand for the uprights to see in the morning.

The fire died down and night regained its control over the land.  The big buck ambled his way down the trail in search of love while the 4 uprights softly snored the night away with dreams of the day to come. 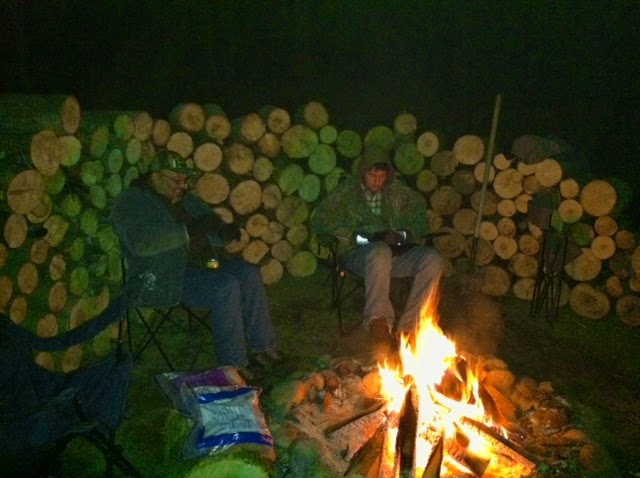