The Lion and I
VI

I was scared, that's for sure. Too much had happened in such a short period of time that my mind and body were in shock recovery mode. Every little thing sent me jumping about.
The noise coming from the brush behind me was no different.
I jumped up and spun around, careful to keep the tree between me and whatever was making the noise.
“Hello,” I hollered into the dark.
“Is anybody out there?”

Nothing or no one answered. The noise had gone silent. I waited for a minute or two, which felt like an hour and decided that whatever it was must have wondered off. I had no idea where I was and visions of wild boars or jaguars and even tigers jumped into my mind. Just about anything that could possibly eat me, I figured, could be lurking in the dark. Lying in wait in, the three foot tall, thick Bermuda grass, for just the right opportunity to strike.

I laughed nervously into the night. I knew that tigers lived on the other side of the world but nevertheless the fear still lingered. I sat back down on the soft sand and once again leaned my back up against the trunk of the palm tree. I looked up at the moon, it seemed so big and so close. I had never witnessed such a sight before. I reached out my hand as if I could touch it when the noise started again.

This time I jumped up and headed towards the water's edge. I wanted to be in the open if I was going to be attacked.

“God damn you,” I hollered into the night.
My pulse was racing and adrenaline spikes surged through my body. The sound was much closer this time. I picked up a piece of driftwood from the sand and held it up, wielding it as a club. The sound continued, audible even over the surf some 30 yards behind me. I took a few steps closer to the brush, I could see the grass moving in the moonlight.

I held the makeshift club high over my head in an attempt to make myself seem bigger than I really was. I started to grunt and make deep sounds. I wanted to look big and sound big. In sheer anticipation of the attack that I thought would be the end of me I screamed into the night and started stomping towards the grass. I wouldn't go out without a fight. A few feet from the still moving grass, I gave one last blood-curdling scream and that is when a gigantic crab crawled out of the grass.

Slowly he inched his entire body out of the grass, all two feet of it, and headed towards the nearest palm tree which happened to be the one I had my back against just moments prior.
He was huge. He had a shell not unlike a turtle, domed in shape, mottled brown and black but what was even more striking was the huge legs that protruded out from under his shell. There were three of them on each side and each one ended in a sharp point. They were as big around as a man's wrist and slightly lighter in color than the main shell. A light sandy brown with little bumps that were colored black. Two gigantic claws protruded from the front, Each one was bigger than my hand. His head, almost as big as his claws, and with an equal amount of shelled protection was nestled between those gigantic front legs.

I stood there in awe, feeling ridiculous at my prior gestures, and watched this amazing looking creature. As he reached the tree, he began to climb. If I wasn't in shock before I sure was now. I could not believe my eyes as the giant crab scuttled his way up the tree. I could see him perfectly in the moonlight as he made his way up into the palm fronds at the top and then he disappeared into the thick vegetation atop the tree. I sat there for quite awhile trying to soak in the sight I had just seen. Even though he was just a crab I still didn't want to get near him. I imagined with one pinch he could take one of my hands off.

Creepy was my first thought. Food was my second. There was a lot of meat in that giant crab. He had to come down at some time and I just had to be there to catch him somehow.

My mind raced as to how I could dispatch the armored beast. I wasn't sure the driftwood could get the job done but perhaps the rock that I had used to shell the coconuts could. I raced over to where I had found the rock and pulled it from the sand. I carried it back to the tree and sat and waited. It was sometime later when I heard stirring from the tree top and I strained my eyes to see anything up there. The moon had moved across the sky and it wasn't near as light as it was before.

I could hear a sound up there. It sounded raspy almost saw like. I imagined that's what it would sound like if I heard an elephant chewing on tree branches. Then the chewing noise stopped and something moved in the tree and I heard a 'thump'.

A coconut had fallen out of the tree, I presumed he had knocked it loose while he was devouring whatever it was he had found up there. A bird's nest, full of eggs, was my best guess. I was happy he had knocked a coconut from the tree as the ones that were scattered about were mostly over-ripe or rotten. I made a mental note of its location so I could gather it up in the daylight. Soon another noise came from the treetop and in the scarce moonlight, I watched as the monster made his way back down the tree. Upon reaching the bottom, he scuttled over to the coconut that had fell and with his giant claws, promptly ripped the thing to shreds and began devouring the contents.

At first I was a little mad. I had wanted that coconut and he was eating it. I didn't make the connection right away that this was a giant coconut crab and that he went up the tree specifically to cut loose a coconut and then eat it. I was upset and I had gone many days with little to no food or water. That was my coconut. Emotions overtook me and I ran towards the crab, cursing and screaming and when I got close I smashed the rock down upon his head. His shell wasn't as hard as I had presumed and his head caved in from the rock and he lay still. He was dead. I ripped the coconut from his claws and sat down next to the dead creature. I chewed a piece of the white flesh and then I began to cry.

I was overcome with emotion, terrified at what was lurking in the dark, not knowing where I was and almost at the brink of total dehydration and walking the trail towards starvation. I was not of a sound mind and I felt sad at killing the crab almost immediately after I dispatched it.

It was a senseless act. One committed mostly from trying to gain some form of control or power over my desperate situation. I had no way of cooking the crab and I wasn't about to eat it raw as I could tell from its carapace that it was all runny on the inside and only the heat from a fire would firm the flesh and make it edible.

So I sat there and I cried for a good bit. Soon enough I was done feeling sorry for myself and I began to dig a hole. I thought it only right to bury the poor crab. I also didn't want any dead things around me that might attract another even scarier predator. One even more vicious than a coconut eating crab.

Later on, in my stay on the island, I would learn to use these crabs to harvest my coconuts for me. There wasn't a large population of them on this little island, and if I ate them all it would only take a few weeks to eliminate them all.
In the days to come, after I had depleted the store of coconuts in my main area of the beach, I had to venture out further and further to find good coconuts. An idea came to me one day when I came across one of these crabs in my daily ventures to find fresh coconuts. I could keep one as a pet of sorts.

So I gathered up some of the vines that grew everywhere and made some restraints. I kept him tied up nearby and every so often I would drag him to a palm and because he was hungry he would climb right up the tree and cut loose a coconut.

I would drink the milk and eat most of the flesh and he would get the rest. I had several different crabs tied up around the island at all the best spots for coconut harvesting. It was my own personal herd of coconut harvesting crabs. I even had names for them. 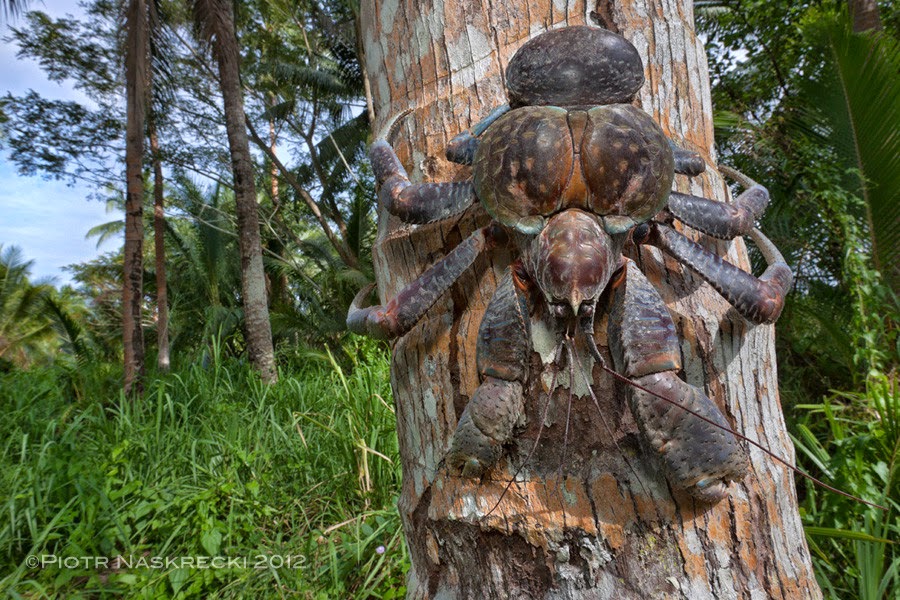 Posted by Bushman at 9:40 AM
Email ThisBlogThis!Share to TwitterShare to FacebookShare to Pinterest