Tutored, neutered, there all the same right?

It's finally Thursday and guess what?
I don't have to work tomorrow.  Apparently the work gods deem that 40 hours is enough this week.

That means I get to sit in my writing room and wail away at the keys until something, clearly meant for either a weekend at Bernie's, or some public restroom stall comes pouring forth.
Shouldn't take much for either one but you had better believe I will think it's funny.

Just like I think it's funny when I hide behind the door in the bathroom and scare the bejesus out of my wife.  I don't know why she doesn't appreciate it.  I laugh my ass off!

I haven't made any progress on anything at all this week.  Work has been dreadful.  The higher ups have got their whips out and they are finely tuned and polished to a painful point.

When I get home it takes the remaining energy I have left just to change clothes and make a cup of coffee...and I use a Keurig, so all I have to do is push a button!

Yeah, I know, if you want it bad enough...but really you don't want to read what I would write after work.  It would be likened to an episode of Threes' Company, but Jack would be played by Michael Moore and the girls would be played by Roseanne and Riki Lake.  (That actually might be entertaining for a spell)  What I'm saying is it just wouldn't work.


So anyways I don't force it.  Mornings are my best time.  Early bird gets the worm.  The worm, in this case, is words.  Lots of them and they all make a little trip together to adventure land.

I just left the optometrist.  I have new contacts in my eyes.
My eyes are worse than before.
He is correcting my "bad" eye.  My left eye can't really read anything without my right eye.
He is correcting my distance vision (which means I may have to wear a pair of readers over my contacts for up close stuff.  I guess he can't fix everything with one solution.
My "oilers" in my eyes, which keep the tears from evaporating too fast, don't work very well.  (I think they must be Mexican) so my eyes dry out fast, especially with contacts.
I just dropped $80.

Best news of the day:
My wife finally landed a new job!  Not sure what she will be doing but it's more money than the last job, which was corporate downsized, and it is a heck of a lot closer to home.
Can you smell that?  It's new cabin smell.  Ahhhhhhh!!!!!!!!!!!!!

Painting has commenced in the writing room.  More to follow tomorrow.
Out of the 7 new books, stacked on my awesome new writing desk, one of them has been closed and moved to the read pile.

Tomorrow, Remmi goes to get tutored.  Maybe it will calm him down a bit. 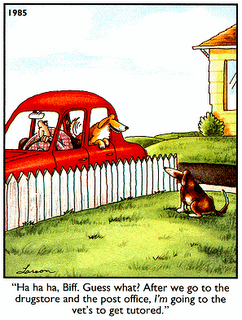 That's about it for now.  Time for dinner and most likely a nap before bedtime!

Posted by Bushman at 6:21 PM
Email ThisBlogThis!Share to TwitterShare to FacebookShare to Pinterest