Where Has Bushman Been?

Well, what can I say?
2016 was quite the year.  It's over and while I can't say it was a bad year it most certainly had its ups and downs.

For starters if you were a follower of mine and actually read this blog on a routine basis, you must have noticed that  my last post was back in July.

Life has changed for me.  It's that simple.  What was once important has taken a back seat, more like third row back seat.  My days of waking up with a hot cup of coffee and hitting the blog are all but gone, for now- and that's OK with me...for now.

I'll give you a quick run-down on my year of 2016.  Perhaps you will understand a bit better.
I'll just hit the big topics, I think that should suffice.

Dad had a major heart attack in March.  It was his life changer for sure.  He recovered, slowly but surely and while I don't think he is a 100% he has done well.  I was very afraid he would not get to meet his unborn granddaughter.  I was more afraid that I would lose my best friend and Father!

Corabella was born on April 7th.  She was early by a few weeks and was a bit small at 5lbs 8 oz but she was healthy and I was the happiest person in the world!

In May I was offered a management position at work and I accepted.  I began to work many, many hours.  It was pretty stressful at first but soon thing fell into place.

In June we lost my Father In Law, Roger.  That was very difficult and our family was crushed.
Roger was a great man and I still miss him very much.

Things began to muddle together at this point in the year.  Between the new job and the new baby everything changed.  All of the things I used to do were set aside to take care of my new responsibilities.

Between June and December we lost more family members than anyone should in a year.
My Grandmother Margaret passed away the day after her 70th wedding anniversary.

My wife lost two Uncles and an Aunt.

My mother Kathleen passed away in September.

My wife left her job for a job she has always wanted.  Her persistence paid off and while she took a pay cut to get her foot in the door it won't be long before she climbs up the ladder once again.  She is happy so I am happy.

In October my new job took a turn and I was moved to a different plant to manage it.  The current contract I was working on was winding down and another plant needed a new manager so I was elected to take over that one.
It was a very hard adjustment as the product was completely different, all new people and all new hours.  It is a fast paced, high production assembly line which turns out a vehicle every 13 minutes. We worked a split week.  I work Wednesday, Thursday, Friday for 12 hour shifts and then I work every other Saturday for 8 hour shifts in addition to the 3-12's.  So it is 36 hours one week and 44 the next.  While it may sound nice it took a brutal toll on me and it took awhile for me to get up to speed.

Dad and I had to cancel our Canadian fly in fishing trip scheduled in August.  Deer camp was also cancelled as his health was still not justifiable.  So for me the summer and fall was a blend of work, funerals and taking care of my baby.  Not much else was done.

Winter is here now and things are settling down a bit.

My amazing little Corabella is the shining star in my life right now.  I love waking up to her smile as she is a morning person just like me.  We both get up around 5AM on my days off and we watch Mickey Mouse and talk.  Her smile is amazing, her laugh is contagious and I spend most of my time thinking of her when I am not with her.

Life can be tough but it can also give you some of the most beautiful things you will ever see.  It is how you deal with it, how you adapt and overcome and most importantly how you choose to spend every minute of it that makes you who you are.

I wish all of  you the best in the new year.  Live it like it was your last! 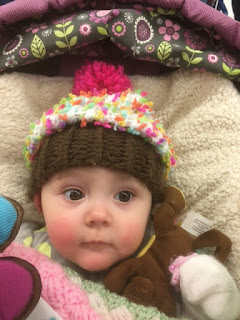 Posted by Bushman at 7:51 AM
Email ThisBlogThis!Share to TwitterShare to FacebookShare to Pinterest