Hello again,
I feel as though I have neglected you.  My last post was on the 15th of January.
I am truly sorry.  I have a new schedule and now I wake up at 4 am everyday and I am
just too tired at night to post.  I know it's just typing but if I'm tired it doesn't feel right.

Our internet was down all last week as well.  Cable company said we needed a new converter box because ours was old.  They sent us a new one and we hooked it up and everything went to H-E double hockey sticks.

I have been quite the internet junky as of late so it was a tough week.  Especially with the research that I have been doing.  We are so dependent on technology.
A brief update it's COLD AS A WELL DIGGERS #$@% IN JANUARY.

Actually just a little colder than that.  I find it amusing that the dogs want to be outside even more now.
I let them out and then stand inside at the doorwall and watch them.  Even with my new layer of blubber
(Thanks Chantix and my ability to taste food again) I find it much to chilly for my willy!!!!!!!

I managed to get out ice fishing again and this time I had a wanky danky fish finder.  I only caught a couple of  fish while using it and the rest without.  Apparently you just have to have one available.  Must be a new rule that they developed while I was away from the sport for so long.  Thanks Bobby for the use of your wanky danky fish finder!!!!:) 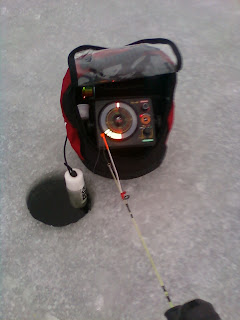 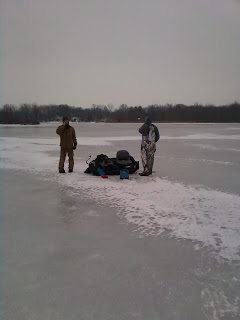 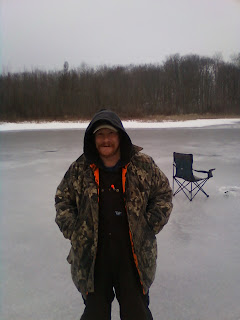 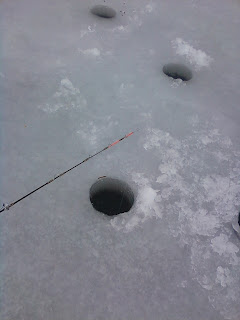 The three holes I caught most of my fish from. 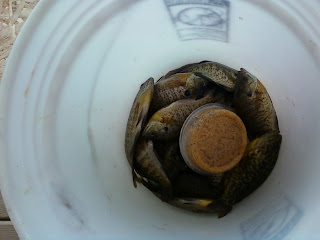 Bucket O' Bluegills
We had a good time and the weather was nice as well.
Thanks for checking back in and I will be back.  (Sooner this time)
Posted by Bushman at 6:15 AM
Email ThisBlogThis!Share to TwitterShare to FacebookShare to Pinterest