Went ice fishing for the first time in years.  I used to go with my dad all the time but he moved away.
So I decided I would try it again.
I went out to Narrow Lake and parked in the public boat ramp.  Supposed to cost 6 bucks to park there according to the sign but "No Hablo Ingles para mi el dia."
I just followed some tracks to a couple holes that were fortunatley still open because the ice auger I borrowed was very dull.
I had two poles going one had a wax worm and the other a spike.  30 foot of water. 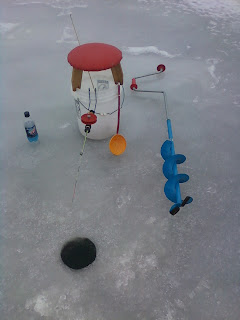 Here is my simple set up.

Didn't get a bite.  These two guys come over next to me and there is a couple holes open by him so he plunks his wanky danky fish finder in the hole and says, " There is one fish down there".  Then he drops his line down the hole and catches the damn thing.  Then his buddy repeats the same thing verbatim.

Here is what I stared at: 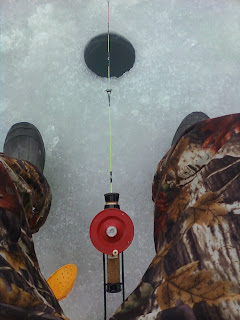 Oh well it was right in the middle of the afternoon so I'll go back this evening and tryit again.

It was nice just to get out although would have been better had my pops been there.

Posted by Bushman at 2:15 PM
Email ThisBlogThis!Share to TwitterShare to FacebookShare to Pinterest