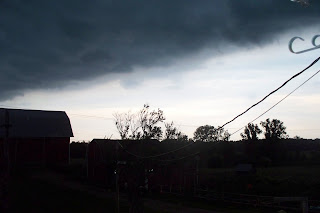 Had a big storm roll through Friday evening.
We had just returned from an emergency ice cream run when  I began to hear the wind coming.  It was an eerie sound beacuse you could hear it but you couldn't see the effects yet.  It was like a demonic runaway train headed your way and there was no escape.  You simply stood your ground and hoped his devouring jaws would leave something to rebuild from.
The leading edge of the storm gathered and rolled overhead like a giant black wave, sucking everything in as it's undertow grabbed and reached for anything not anchored.  We scampered around the yard pulling down flower baskets and laying down scarecrows, weighting down hot tub covers and doing whatever we could to protect our small piece of this world.
The radio blared it's warning letting us know of the impending doom of 75 mph winds racing down the track and heading right at us.  The sky became dark and the goosebumps raced up my arms and settled into the pit of my stomache.  I thought of all the hard work and time I had put into my garden and my yard, only to be destroyed yet again by the temperment of mother nature.  I waited and hoped.
The wind arrived all at once, no gentle swell to warn us but a monstrous gulch of air slamming into the side of the house and sending the privacy screen smashing into the barbeque grill.  The trees bent and reached for the ground and the wind howled in anger because they would not break.  Dust swirled and twisted into devilish mini tornados.  The clouds lowered and raced into the East.  Bullets of rain slammed into the deck propelled by the sheer power of the wind. 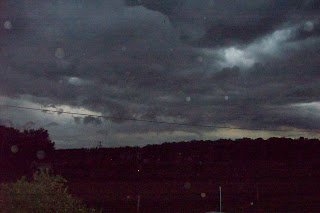 As the heavens lit up and lightning streaked to the ground I watched, horrified in slow motion, as Remmi bolted past me and out into the yard to retrieve his beloved ball from the clutches of the devil himself.  I smelled the acrid air and as the lightning crashed into his small yellow body I jumped and was stirred from my momentary day dream and put both dogs in the house.  The power of the storm had me in it's grasp and just as I thought we would all fall victim to the wind, it began to let up.  We had not broken, only bent.  Her power was not great enough this time.  We stood tall yet we bowed to her greatness as she passed across our backs.  Then it was over but for the rain which now just watered the lawn and the garden.
Posted by Bushman at 8:44 AM
Email ThisBlogThis!Share to TwitterShare to FacebookShare to Pinterest