Ok it's not a total remodel.  I wish it was.  Our upstairs shower developed a leak sometime ago.
In the process of investigating, repairing the wrong things and re-sealing the right things but in the wrong way I believe I finally have it conquered.  The seal in the drain of the upstairs shower pan had loosened over time and needed restoration.  I removed it and sealed with silicone.  I then monitored the downstairs bathroom ceiling for a month.  Over time a hole the size of a softball had appeared in the ceiling so it was easy to see if any leaks developed.  I pinned a piece of paper over the hole so I could see the faintest drip.  I was resolved to fix the problem not just cover up the hole(like last time).    So began the journey into DIY.  I scraped all of the textured ceiling off around the hole and sanded.  Then on both ends of the tub the caulk had degraded and the shower water was leaking out of the tub.  So of course the drywall was bad on one side and the other side(plaster) had all bubbled and cracked. 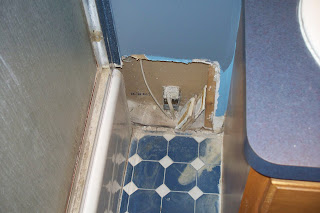 So I removed all the bad stuff and patched it all in.  Then I had to re-caulk the entire tub surround.
Then I removed the wallpaper border at the top of the wall.  Cleaned and painted. 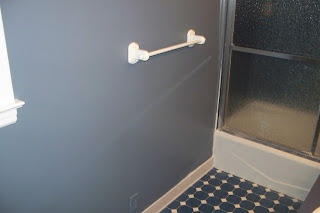 We chose a grayish blue color called slate quarry.  The floor is blue tile.  The sink top is blue, the shower is blue so colors were limited.  This color worked real well.  It gives it a sleek contemporary look and the old "country style" is gone.  The ceiling I patched and re-textured. 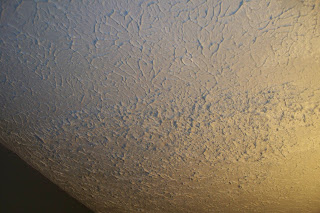 My texturing is wanting but I did it with a dishrag so not bad considering. 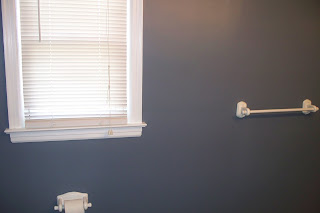 The gray makes the white parts really pop.  Of course I had my helper by my side the entire time.(as evidenced by the white footprints around the house) 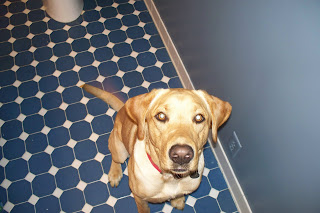 Now I need to clean all my crap off the counter!!!LOL 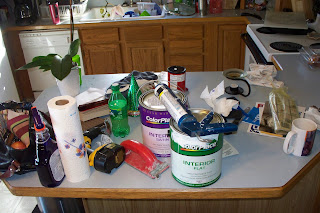 Yes the kitchen counters are blue as well.  The exterior of the house used to be blue too.
The carpet was blue as well before I removed it all and refinished the hardwood floors.
I guess blue was the color back then.  It's not bad just hard to work with if you want to change things up a bit.
Posted by Bushman at 11:07 AM
Email ThisBlogThis!Share to TwitterShare to FacebookShare to Pinterest