Well in my never ending state of sleeplessness I was up at 5 am again this morning and perched on my beloved computer searching for coffee pots on e-bay to take hunting.  Mind you there is no power in the north woods and I would never take a generator.  Well I wouldn't say never but not this year anyways.  So I need a stove top percolator.  I had looked into purchasing a stove top drip coffee maker made by Coleman and the reviews say it works well however it does not keep the coffee hot after brewing and short of pouring it into another pot and reheating it you are limited to drinking coffee immediately.  Also the price was $40.  Ouch not good for a miser like myself.  ( I say that as I just finished peeling the old duct tape off the camper canvas which I used as a patch last time, hey it worked and it was cheap)
So I checked the local stores and there really wasn't much for less than $25 bucks and most of those were 8 cuppers.  Not good if you know how much my Dad and I drink coffee.
DING DING (that's the bell in my head going off, it makes an eerily creepy sound in the wee hours of the morning, sort of rusty and creaky at first, you can tell it doesn't ring much)  E-Bay I think.  Like I'm some sort of gifted wizard.  Everyone else would've already had it purchased while I was sorting through the Halloween stuff at Target in my attempts to locate the coffee pot section UGH!  You would be amazed at what is for sale in the coffee pot section of E-bay.  I found all kinds of neat stuff.  French presses, Turkish tea pots, espresso makers, glass percolators, vacuum pots and oh yeah a silver Russian coffee pot for $20,000.  Not kidding.  I would love to taste a cup of coffee out of that thing.  For 20 grand it better come with a handful of cosmonauts, KGB officials and at least one of Karl Marx's relatives.  It was pretty though, unfortunately my bid did not meet the reserve, go figure!  I did find a percolator though.  A standard aluminum 12-14 cupper.  Although it was only moments ago I have already forgotten the price ( easy to do when your having visions of drinking coffee with Boris Yeltsin) I think it was around $6.  Now that's a deal.  It was about $10 for shipping but hey to buy a comparable one especially a 12-14 cupper you're looking at $45-50.  I should have that bid all wrapped up, there wasn't much time left on it. (besides I made a deal with some KGB agents over coffee to muscle the bid through) 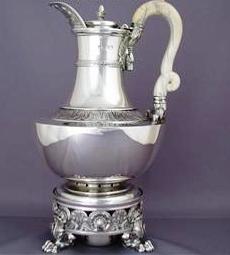 With that small victory at hand and the Germans in full retreat I moved on to lanterns.  Oh yeah I found a dual mantle brand new in the box propane lantern with carrying case for 56 Rubles.  Oh sorry I mean $1.99.  Yep 2 bucks.  With only 2 hours left to bid and no prior bids.  Shipping was like $20 but hey I just looked at one in the store yesterday and it was $55 for a dual mantle with case.  Cha ching!!  I also picked up a couple hunting blinds to keep the old man and the boy out of the elements.  On sale (of course) for $35 a piece. 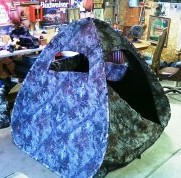 Well that's enough for now I need to finish growing my beard for deer camp.  Yes with my hair follicles it takes an immense effort on my part.  I know you don't understand it's just something we have to do.  Kind of like watching another guy barbeque.  It's an unsaid man law.  Don't try an understand it.

Posted by Bushman at 7:46 AM
Email ThisBlogThis!Share to TwitterShare to FacebookShare to Pinterest