I swear there are some true morons out there (other than me).  I posted an ad on Craig's list to sell the AC unit I just peeled off my camper and of course I got lured into looking for all the things I don't need and most of what I can't afford but it's a pretty powerful website.  Just full of idiots.
First thing I see is a guy who is selling climbing sticks for a tree stand.  12 ft section for $55.  I can buy those at meijer all day long for $45 brand new.  Does his come with the tree or what?
Next thing I see is a person selling a camo pop up blind that comes with a carrie case.  A CARRIE case come on people if you want someone to take you seriously then learn to spell.  I can forgive typos but this guy actually went above and beyond a typo by adding in an extra letter.
Then the guy who puts his ad in the barter section.  Yeah he wants to trade for cash!  No shit Sherlock?
I did see a nice 27 yr. old horse that was selling for $2500.  I tried to figure the ratio of weight to dog food but I was confused with what to do with the hooves.  I'm not sure how long horses live but I don't think you can re-finish them like an antique car so what do you do with a 27 yr old horse.  Alpo, Purina?
I suppose you can use him as a filler in a Italian mafia movie but what do you do with the rest of the body?
Then my all time favorite.  This person has a really cool custom golf cart for $4500.  He is adamant that once it sells this will be the last time he posts it.  Ummmm OK.    Proof read people.
Enough of that.  What did I do yesterday you ask? (person in back row, behind you 2 sections and 3 seats to the left was asking in case you wondered)
I patched 129 holes in the canvas of my camper.  Reinstalled said canvas back onto camper.  Removed AC unit from roof of camper and patched that hole.  Then I went in and watched Patch Adams with Robin Williams....no I didn't watch Patch Adams just messing with you.
I must admit with all the mice damage even washing all the canvas sides it still smelled a little like mouse pee.
So I tried a little redneck philosophy.  What causes odor?  Bacteria causes odor.  What kills bacteria?  (no I didn't put my camper on a penicillin regimen)  Smoke kills bacteria.  That's why the Indians would take smoke baths.  OK genius.  Also what is a better air freshener (to a guy anyways) then bacon?
So I took some bacon out of the house and into the camper and fried it.  Smells good.  Temporary!  ( voice in my head has returned from vacation, he's been on Everest for a couple weeks now)  So I take a piece of cedar wood and place it over the burner.  Filling the camper with the aroma (smoke) of burning cedar.  Much better than any other wood.  That is how I kill odor causing bacteria.  Does it work?  (Oh you should really hear the guy in my head laughing, sometimes I think he is the evil twin of my wife or is it the good twin because she is the evil.....)  I think it might work but what better way to spend the evening then frying bacon, drinking cold beer and hanging with your two best friends. 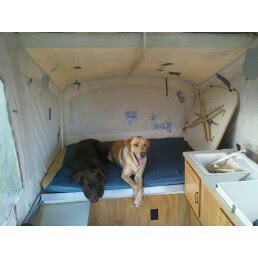 Check out all the patches.  You should see the other side.
OK enough but one last thing.  I found out how they make pumpkin pies. 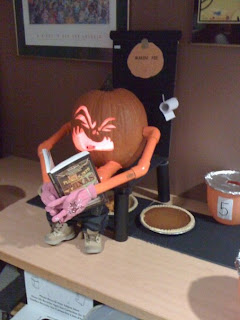 Also welcome Amy.  Thanks for following.
Posted by Bushman at 7:59 AM
Email ThisBlogThis!Share to TwitterShare to FacebookShare to Pinterest