A day in the Wood Shop

So my neighbors show up the other day.  Uhhh lets see it was last Thursday night.  I was well into my fourth Oktoberfest by then and the stress of the work week was being washed down my throat (only to regurgitate itself in the morning in the shape of a headache).  I don't know how the topic got brought up but she mentioned that her art class at school ( she is the art teacher at the local middle school) had completely deprived itself of their annual budget.  ( I'm not sure if that's the exact truth but it makes the story better)
I suppose that's a bad thing when your budget runs out and it's only a month into the school year but alas there are worse things.  She simply wanted some painters easels for her students and the superintendent said no. (mean prick anyways)  Now in my 3 1/2 beer state of mind I tried to picture those students painting without easels.  It can be done.  The problem is where is the romance of painting without an easel?  You might as well put numbers on the picture and let the first graders do it!
I just couldn't stand by and let those kids paint on the flat.  Nope ain't gonna do it.  Soooo Mr. Jeffrey opens his mouth and out comes the words that secured the fate of my Saturday.  " I'll build you some easels", I say.
"How many do you want"?  All the while in the back of my head I'm running the calender and my inner voice is screaming at me," Friday is the opener of archery deer season you imbecile!!!"  "You know you are going to have to work overtime on Friday and that only leaves you with Saturday and Sunday."
She says she would like 17.  The voice inside my head rolls his eyes and kicks me in the frontal lobe causing me to blink erratically and drool just a bit.  I wipe my mouth before anyone notices and respond, " No problem, I'll have 'em done in no time flat."  With that said and the voice in my head sounding like the Yosemite Sam ranting and raving we moved on to other topics like gardening and swiss chard and who knows what.  By then Oktoberfest has gone from a fest to a Oktoberbash!  So I spent this Saturday in the woodshop.  Me and my two dogs and a pile of sawdust.
Now for some reason I thought I had enough wood.  You know the saying beer goggles well I think beer mathmatics fit the bill on this one.  I had already built my prototype during the week so it was down to pattern cutting, sanding and assembly.  At least for 9 of them anyways and that's where the wood ran out.
So being cheap (you have to be cheap when you are poor) I decided I would take a drive and ask the community for donations.  I went to the local lumber yard (easel in tow) and presented my construction and announced my intentions and my requirements. It was for one piece of cedar that was 1"x8"x6 ft long.  Nothing more.  A $7 dollar piece of wood.  Holy crap you would have thought I asked for her ovaries.  Judging by her age they were probably useless anyways but what evil eyes she had.  She huffs and says," Just so you know you are the 4th person this weekend to ask for free stuff for the school".  Apparently the budget thing has spread like wildfire.  I responded with a bit of drool thanks to the guy in my head who had resumed his kicking in a determined fashion while chanting,"told ya, told ya, could've been in the woods"
Actually I didn't respond because she had whirled away and started hammering at the keys on her computer somewhat comically in timing with upper guys kicks to the frontal lobe.
Of course I couldn't leave well enough alone and I asked her what type of materials the other people were asking for.  Why? I don't know.  Perhaps I thought others were building easels as well and if that was the case I would have to step up my game and make sure mine were the best.  She said they were asking for all kinds of "crap".  Yes she said crap.  I wanted to tell her that it was her "crap" they were after but remained silent.  Upper guy had some neat suggestions though.  So I left feeling slightly guilty for stealing from her grandchildren but happy none the less because my mission was successful.   Had I have known the drama that I was going to walk into I would have gathered up some empty Oktoberfest bottles and offered them up to her for their deposit value!  Might have only been $6 instead of $7.  I left there bewildered and confused.  My kids don't even go to this school system and I was helping them.
So I left and off to the hardware store I went in search of wingnuts.  Now I have never bought wingnuts before so little did I know that they are apparently made from pure gold which is mined in the most prodigious gold mines in the world.  Tiny little wingnuts retailing at $1.49 made me think twice before asking for donations when I needed 34 of them so I skipped the whole process and headed for the door while upper guy screamed with laughter.  I told him I was going to use regular nuts anyways.  Who am I kidding he lives in my brain how could I lie to him.  Little freak!  So I went home and I cut and I sanded and I assembled and here it comes the conclusion.  The sum of adding good deed, neighbors, poor under budgeted art students and Oktoberfest. 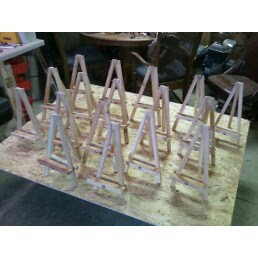 In all seriousness I enjoyed the project and was glad to help out.  I still have 88 days left to hunt deer.  I'm sure I'll get out.  It was worth the trade.  The weather was horrible anyways.
I hope you liked the story!!  Ciao!
Posted by Bushman at 5:03 PM
Email ThisBlogThis!Share to TwitterShare to FacebookShare to Pinterest