A mouse can squeeze through a hole that isn't even there!!!---The Verminator

A mouse (plural: mice) is a small mammal belonging to the order of rodents. The best known mouse species is the common house mouse (Mus musculus). It is also a popular pet. In some places, certain kinds of field mice are also common. This rodent is eaten by large birds such as hawks and eagles. They are known to invade homes for food and occasionally shelter.

Emphasis on the invasion part.  The little bastards are smart too.  I checked the camper from time to time.
Not a full check but I popped open the door and didn't see any mouse turds so I figured it was ok.
They managed to stay on the opposite side where I didn't notice them and let me tell you they nested well.
They chewed holes in all the canvas, plastic windows, screens, seat cushions and one hole in the mattress.
Not too mention left their bubonic plague pellets everywhere.   I can clean.  Mamma can patch. That part can be overcome.  The pop up camper is getting a little long in the tooth anyways so it's not good for much except taking it to deer camp.  Apparently when the "professionals" installed the roof mounted AC years ago they apparently were running low on sealant because that developed a leak and rotted a few things out in the upper portion.  Cosmetically not the best looking thing when your ceiling has bigger waves than the lake you swam in as a kid.   For deer camp?  It'll work.

Then I finally got around to fixing the bed rails.  The part where the beds slide out on each end.  When we were setting up one year, someone climbed out on the bed before the prop rods were in place and bent the rails all to hell.  You had to use a hammer to beat them in and out.  So I disassembled all that and repaired it so it functions properly.

I need to make new cushions for the table.  I won't even bother trying to clean the mouse smell out of them.
On a good note the tires seem to be OK.  A little checked but in good spirits.  The suspension looks OK.  No broken welds on the "shackles".  It is a simple leaf spring mounted to brackets that are welded to the frame.  Nothing fancy.  Wheel bearings seem OK, no play in them.

My biggest fear is having the camper fall to pieces on the side of the freeway.  If you've ever been deer hunting in Michigan via I-75 or US 27 you know what I mean.  There is an onslaught of vehicles, motor homes, trailers and makeshift campers upon these freeways.  all headed North for one our greatest adventures of the year.  It is sad to see these broken down vehicles on the side of the road with a bad wheel bearing, flat tire, or busted suspension.  An ill loaded trailer or camper can swing side to side as it travels down the freeway at 70 MPH and it doesn't take much to wreak havoc on an old wheel bearing especially one that hasn't been greased.  Preparation is the key to success.

So you wanna see my trashed camper? 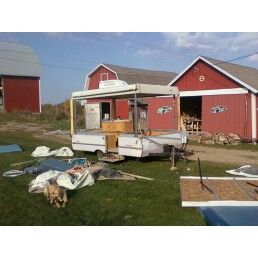 All the crap I had to clean out of the inside. 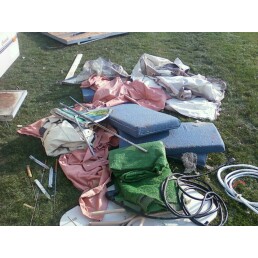 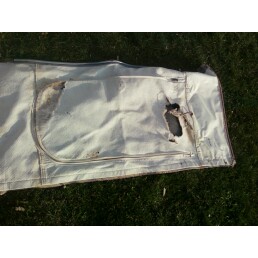 Well I suppose there is a rainbow for every storm and this one is that now I have a designated deer camper that I can paint camo and customize the interior for just deer hunting.
That's the only damn rainbow I can find.  Hopefully I don't come down with the Hanta Virus after playing in all the turds!!!
﻿
Posted by Bushman at 9:04 AM
Email ThisBlogThis!Share to TwitterShare to FacebookShare to Pinterest