Opening morning and our summit of Mount Brian 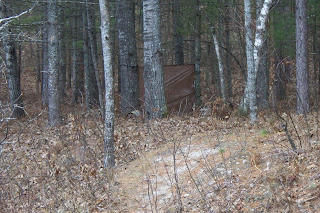 Opening morning dawned extremely early, we awoke and lit the heater to warm the camper much to the joy of Joe, a 6'1" bean pole,  soaking wet maybe a 130 lbs.  He froze his buns off all week while Dad and I slept without covers.  Sometimes it pays to be fat!!  I mean slightly overweight.  :)

We had a ripping good breakfast of eggs, fried potatoes with onions and green peppers, sausage and some grilled toast.  Two pots of coffee washed everything down nicely.

We headed out in the dark and began the summit attempt of Mt. Brian, named for the first Bushman to summit a few years back in search of a good blind location.
The adrenaline was pumping and the sweat was beginning to flow.  I had worn my lower bibs but carried my coat in my backpack for fear of overheating but it was a foregone conclusion.  By the time I reached my blind I was sweating like a fat guy shoveling lava and my heart was pounding to the beat of the University of Michigan fight song.
Gasping for air I stepped into the blind and wiped a sleeve full of sweat from my brow, plopped down in my chair and cursed myself silently for climbing so fast.
I cooled down soon enough and removed my coat from the backpack and put it on.  The light was beginning to flood the eastern edge of the treeline and I could make out vague shapes which could have been trees or giant bears waiting to pounce upon my fattened and warmed, chubby body.  Either way if you've been in the woods in the dark on opening morning your senses are on full alert, adrenaline courses through your body and you jump and twitch at every sound you hear.  God forbid a stick breaks somewhere out in front of you in the dark you may just scream.
There is nothing that matches the thrill of that 15 minutes of darkness.  Soon it was light enough to see the cross hairs through my scope and the hunt was on.  Shots rang out in the distance and I tensed, gun at the ready, waiting for that buck to show himself.  Soon the minutes turned into an hour and the tension was leaving my shoulders and I was beginning to settle in for the duration of the hunt when I saw something white.  Sure enough a deer.  My heart took off for the races again and I felt like a kid once more.  I watched a group of 4 does make their way towards my blind and at about 40 yards my rifle cracked sending three of them scampering up the ridge.
Not long after that I heard the roar of my father's rifle behind me as he dropped another doe.  Now all we needed was Joe to shoot.  Nothing but silence was heard from his side.  Although he seen deer he just didn't have any good clean shots and i was proud of him for being a good sportsmen in that aspect.   We waited until about 11 o'clock and then we dressed and hauled the two does form the woods to our camp.  By the time we had hauled both deer from Mt. Brian we were exhausted.
A cold beer and a hot lunch brought us some relief and we enjoyed each others success and tales of the morning.  Here is the view from my blind. 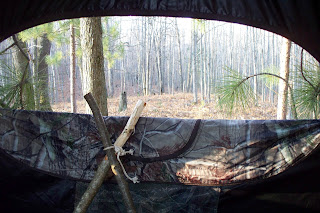 We went out for the evening hunt but nobody saw a thing.
We returned to camp and enjoyed a nice fire and a meal of pan fried walleye and french fries.
This meal was voted our tastiest meal of deer camp 2010.
Thanks Harry for the beautiful fillets caught fresh from Saginaw Bay just this July. 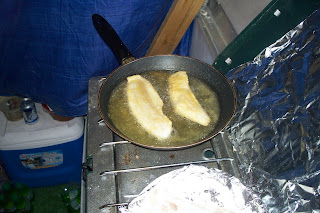 I had dad fry the fish as he is the fish guru being from Florida and all and I stuck with the french fries.  Although are they really French? 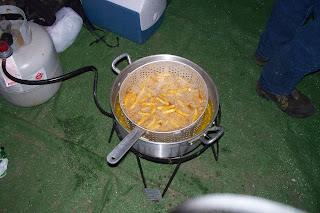 I wish I would have got a shot of the finished fish.  They were so beautiful golden brown.  Perfectly done.
I believe even Gordon Ramsay may have kissed dad on the cheek for those fillets.  Bloody right he would!! 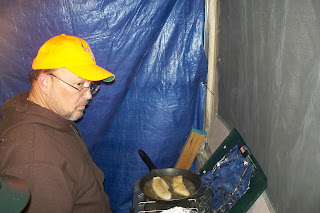 So with a successful day behind us we climbed into our bunks and snored the night away.  Sorry Joe.  You need to learn to fall asleep first.
Posted by Bushman at 5:26 PM
Email ThisBlogThis!Share to TwitterShare to FacebookShare to Pinterest