I dropped my father off at the airport yesterday.  Quickly and without much ado as the tears in my eyes were beginning to swell to large enough proportions that would surely leak down my cheek and give away my emotions.  (not fitting for a guy you know).  A quick grunt, a strong hug and a peck on the cheek was all I could do.  My throat had already closed and was incapable of anything but squeaks and grunts.  It was 15 miles down the freeway before I regained enough composure to utter any words to my wife, who sat beside me in the passengers seat.  It was sad.  I was sad.  Sad enough that the tears flow now as I type, blurring my vision and jumbling the keys together.  So brief a time and then gone again.  Like a well constructed E-Mail that just disappears once you hit send.  Leaving you wondering when you'll get a response.  A speck of time in the universe that leaves a giant hole in the heart.  In time the hole closes as it is packed full with memories and laughs and most of all time.  Time seems to heal all things.  So father as you read this know that I love you and miss you already and I will look forward to the next time we meet again.  (this should explain the hasty drop off at the airport as well).  So now let's celebrate deer camp a few more times before I pack it away until next fall.

When we arrived at our spot, next to the creek in the middle of state land, we were much relieved to find it empty.  There is always a bit of anxiety as you round the bends and strain your eyes and neck to see any hint of human habitation.  We quickly set the camper in it's place and began to assemble camp.
This is the bare bones here.  Set up with tarps and awning room in place.  Dad is just beginning the fire pit here and Joe will soon be digging his first ever latrine hole!! 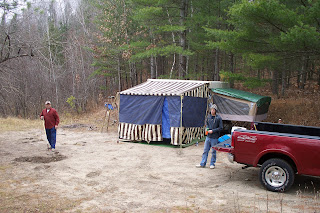 Joe taking a break with a well deserved soda. 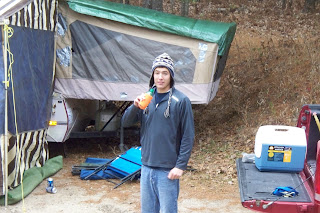 After setting up camp we cut wood.  We would drive down the two track and find dead trees and cut them into 6-8 ft. lengths and load them in the truck.  We filled the truck twice and dumped it off at camp.  Then we went for a ride looking for a chimney.  Every deer camp of ours has to have some sort of chimney.  We prefer a hollow log but sometimes have to build one ourselves.  This year we hit the jack pot.  Travelling well into the hardwoods Northwest of camp we found this giant beech tree.  I wasn't sure we could get it in the truck but somehow we managed. 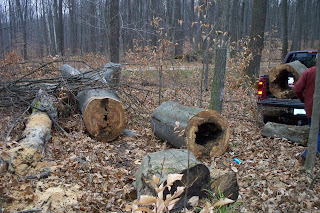 The first section on the ground was too heavy so we cut another and loaded that one by first "stepping" it up to the log you see under the tailgate then up and in. 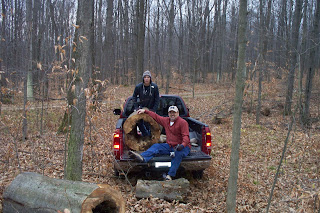 This could very well be my favorite picture of deer camp.  I would say that log weighed about 350 lbs. and stood about 4 ft. tall not to mention the diameter was close to 30 inches.  I don't know why someone had cut the tree down in the first place but thanks we loved it.
If you click on the read more tab right below this line it will take you to the rest of the story.  You will notice these page breaks on my longer posts for those of you not familiar with this feature.
We returned to camp and began cutting the logs into chunks for the fire pit.  Dad and Joe would pick up the 6-8 ft log and move it down a cutting stump and I would cut it with the saw.  There was quite a bit.  There is another row stacked up behind the one you see.  We did this well into the dark and when we finished you could hardly see.  The next day Joe began to split it.  He struggled at first but soon found his niche and became almost addicted to it. 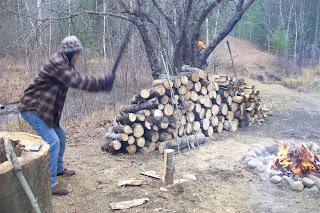 How's this for an action shot! 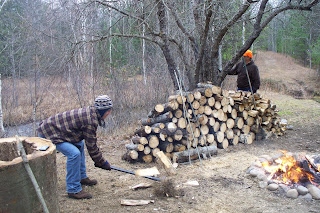 We had a great dinner the first night.  Pork chops over the fire and baked potatoes.  Dad threw a couple handfuls of apple wood into the fire so the chops had a nice sweet smoked flavor.  How fortunate we were to camp next to an apple tree.  Of course by the end of that day we could have ate our boots with ketchup and thought it was wonderful.  We had been awake since 5 am that morning.  We left the house at 8am and arrived in deer camp about 12:30-1:00 o'clock.  Spent the rest of the day digging, chopping, cutting, hauling rocks, tarping well you get the point.
We slept in the next day...NOT... I was awake at 4:30 and making coffee by 5.  We were up and out of the camper by about 8 am much to the displeasure of my father and stepson.  I thought we were sleeping in is all I heard that morning.  We had breakfast and went scouting for a place to set up our blinds.
Turns out Dad wanted to set his blind on the steepest, highest hill in the entire state of Michigan and by the time we went up and down that hill a couple times we were plum tuckered out.  It was a great spot though and well worth the effort.  I ended up with my blind two ridges away so I had almost the same climb in elevation but not as steep as his.  We put Joe in a flat spot fairly close to camp but he overlooked the creek and was situated in a small cedar grove with some heavily worn trails.
We returned to camp and popped a couple beers and rested our weary legs and dad's titanium knee.  Yes he has a complete fake knee and if you need one I suggest you call his Dr.  You would never know he has a fakey.  Incredible piece of work by his Dr and Dad's drive to rehabilitate his knee.
After that we put up a buck pole.  I had some very large zip ties and we used those to secure it to the tree so no pounding of nails or anything to damage the trees. 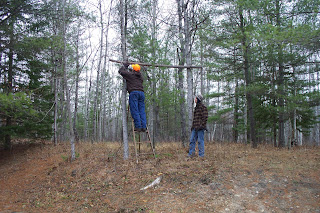 Our first "buck" on the pole was quite unique. 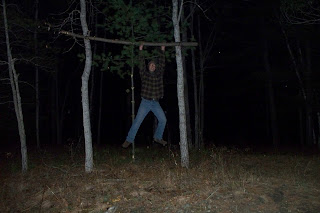 We bet Joe he couldn't jump and reach it but after about 10 tries he got it.
So we were set for opening morning and enjoyed a dinner of venison loin and fried potatoes.
Opening morning came very early and after 2 days of non stop work even I hit the snooze.
It's a %&#@ getting older!!!! 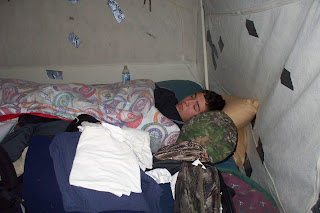 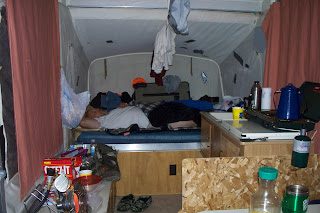 Posted by Bushman at 8:44 AM
Email ThisBlogThis!Share to TwitterShare to FacebookShare to Pinterest