Return of the mighty deer hunters.

My friend Jerry says to us the day before we left for deer camp," If you come home early call me and maybe we'll have a beer before your dad leaves for Florida".  We (dad and I) practically laughed in his face.
"Come home from deer camp early?  Are you crazy?"   Well guess what........... we came home early.
Only one day but still early.  I will get some grief for that one I suppose.  What happened to bring us home early?  Old age!  No just kidding.  Well maybe dad.....no he's not that old.  Two things.  Weather and the lack of 4 legged creatures to toss lead projectiles at.  There was some nasty weather forecasted for today up north.  Windy conditions with rain and snow and cold.  I thought it was wise to pack up early so we didn't have to do it in the crap and drive in the crap.  It was raining and snowing when we packed up and snowed almost half way home.  So good call.  And the deer you ask?  Practically non-existent.  Opening day we seen a total of 11 deer between three of us and all does.  Two of which are no longer up north.  Second day I seen one spike buck and was letting him work his way across the ridge and right into dad's range when someone on the the far ridge opened up and presumably by the sounds of it might just have been successful in holding off a Nazi counter attack.  Now I'm sure you know deer don't like rifle fire and especially not in rapid succession.  Needless to say the spike went straight up over the ridge and out of sight.  Probably still running as far as I know.  And dad went spikeless.  We never saw another deer after that.  All camps in the area packed up and left Tuesday morning leaving no one to move the deer around.  Not to mention the weather was non compliant with deer hunting.  Low pressure, rain, drizzle, snow, winds out of the east, winds out of the south, winds out of the north and west winds that swirled around you just to make sure they didn't miss anything.  Crazy winds.  I have never seen anything like it.  If I was a deer in those conditions I would probably hunker down in the thick stuff and not move at all.  Am I complaining?  Hell no.  Just explaining.  I still had a riot.  Dad and I both shot a doe and Joe received a great education on deer camp etiquette and how fast a deer can actually run past your blind (5ft. away) and your not fast enough to get your gun up.  LOL
All in all a successful deer camp.  Good food, good company, and memories to last a lifetime.
Here is a shot of our camp next to the cold, clear trout stream. 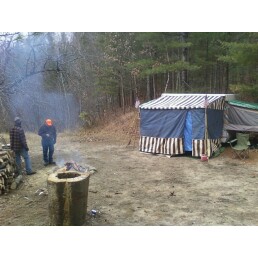 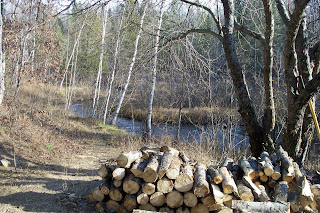 More to come in the days ahead.  I only took a hundred pictures!!
Posted by Bushman at 7:52 AM
Email ThisBlogThis!Share to TwitterShare to FacebookShare to Pinterest