Good Morning and welcome to the last weekend of November.
The last weekend of firearms deer season in Michigan and the beginning of the holiday smack down upon my bank account.  Did I go hunting this morning?  Hell no too cold.  Did I think about it?  Enough to give me partial credit.  I actually slept in this morning until 7 o'clock.  Can you believe it?  Me.  7 am.  After laying on the couch all day yesterday I'm surprised I slept at all.  Went out with the boys on Friday and paid dearly for it on Saturday.  Oh well.  It's been a very long time since I did that.  I had fun.  Although I feel it may be a very long time before it happens again.  Whew!!!!
I don't have much this morning.  Congratulations to the Lake Orion High School Dragons on becoming division 1 state champs in football.  My Alma Matter.  Congrats to Michigan State Spartans as well on their shared title.  Congrats to University of Michigan for at least getting their jerseys on the right way!
Really I don't care much about these events I'm not into sports.  Some say hunting is a sport, I disagree.  I would say it is more of a hobby or a lifestyle than a sport.  But if it is a sport than I digress on the previous statement.  Don't much care for arguments either.  Now that's a sport.  Ask my wife.  She'll argue with you about arguing.  She always wins too.  I think she cheats.  I argue with guy in my head but he usually just mocks me and pokes fun at my weakness until I give in and let him win.
With the onslaught of cold weather and my inhibitions on braving the elements December usually turns my attention towards my culinary experimentation upon my family.  It's funny how the weather can make you hunker down and start thinking of food like a squirrel hoarding nuts for the winter.  (guy in my head is laughing profusely and gibbering something about how I must be a squirrel cuz my heads full of something I can't make it out he's laughing too hard) I was in the grocery store yesterday with my beautiful bride and I told her to stop and look at all the sections of food she normally wouldn't.  That is how I get some of my ideas for cooking.  We have an international section in our mart and she was standing there staring at stuff and I said," c'mon let's go".  She gives me a cold look and says," I'm doing what you told me to do."
Can you believe it?  She listened to me.  I told her to put the pesto down because she wouldn't like it.
I was thinking of having another New Years Eve dinner party this year but slightly hesitant.  I love to cook and entertain it's just very hard to scrape up the kind of cash I need for a dinner party for 8-10 people.  Especially after Christmas.  So we will see.  I recently re-discovered my Showtime Rotisserie "set it and forget it".  I actually forgot I had it all summer.  I suppose I was just to busy with the BBQ grill.  So I brought it out and now my wife says,"OMG (she says that alot)  are you going to cook everything on that now?"  Yeah pretty much me thinks to myself.  What a great contraption though.  In just the last ten days I have done a teriayaki pork tenderloin, 2 chicken legs and 2 thighs, half of a pork loin roast and I'm just getting started.
I was amazed at what that thing would do for chicken thighs.  OMG (sorry had to do it)  I usually am a white meat guy but this could change everything.  That was a triple chicken night that time.  I rotisseried the legs and thighs, I baked the breasts and I fried the wings.  Crispy skin on the outside moist on the inside.  The Colonel would be proud.  By the way whoever came up with the word colonel needs a but whooping.  It needs an R in it.  You can't just leave out the R in a word and pronounce it with one.
Other than cooking I really need to find a winter time hobby.  I'm already fat as a whale and I don't need anymore food.  As for exercising?  When I feel like exercising I just lay down until the feeling goes away.
I don't know how these chefs on TV stay so skinny.  They smoke as well.  What gives with that?  How can you taste the food if your mouth was recently bathed in creosote.  I know as an ex smoker.  I never realized food could taste so good.  Baffling.  If I was to interview for a head chef that would be my first question.  You smoke?  Yep Then get the $%*& out of here.  That's my Ramsay interpretation.  Sometimes I wonder about that guys palate as well.  Do you see the crap they eat over there?  I would really like to try it though.  Just to see.  Maybe it is good.  Withered cockscomb on a bed of rosemary encrusted sardine gills.  Top it off with a warm beer.  Cheerio!  I suppose that comment will let me now if I have any readers from the UK.  Or is it England or is it Great Brittain?  My folks have friends from the UK.  Delightful people.  Funny.  Ok next post will be some food recipes that will compare some of the UK food to the US.  I just happen to have a recipe book that has a recipe from many of the guests that stay at the Florida Resort known as Sea Club.
Some of these people are from the UK.  Enough gibberish for one day mate!

I wonder where this bloke is from.  He shares my commitment to artery clogging deep fat fried things 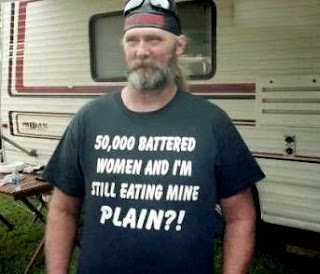 (this is purely a food related picture and no women were hurt during the making of this post)
Posted by Bushman at 8:45 AM
Email ThisBlogThis!Share to TwitterShare to FacebookShare to Pinterest