Well here I sit (are you really going to sing the bathroom fart song in your head?)
Perhaps it's just me who can't help but think of the old writing on the bathroom wall whenever I hear the phrase,"hear I sit".  You could call it unconventional thinking or do as my wife does and just call me a freak!

It is the 4th of December already.  I am wondering if I will make 150 posts by the end of the year.  One a week will get me there.  Is it a goal?  You might say it is.  This time of the year renders no fat dripping off the end of my pork chop.  A cold dry month that bleeds in denominations of $20 and $50s.  Things to post about are drying up faster than Joe Lieberman doing stand up comedy!
I am trying to muster up enough interest to hunt but deer around here have all but disappeared.  Intense hunting pressure, lack of good hunting grounds and a mute passion for doing nothing but laying on the couch and whining about being bored has all but consumed me.

With all the preparation, anticipation and hype of the November Deer camp whisked away by the cold Northerly December winds I have been left with a feeling of purposelessness.  I just can't seem to wrap my head around anything.  And when that happens then things usually take a turn for the worse.  It's terrible that I can sit here and actually realize this.  Knowing what's coming and still helpless to do anything about it.

I suppose it's inevitable.  The sinking.  Disappearing into the cold snow to hibernate the winter months away.  Emerging in the spring fat and cantankerous and unable to reach the spring garden soil due to my overburdened waist line.

I know this post was suppose to be about food but I decided to save that for later in the year.(next)
I love food.  I love to cook food.  However all funds have been re-directed into Christmas and Birthday.  (Yes that's singular.  Momma has a birthday on the 22nd.  It really is no fun buying Christmas presents and birthday presents at the same time.  How do you rank them?  Big one for Birthday or save it for Christmas? )
The problem with food is my family won't eat much but pizza and burgers, tacos and spaghetti.
Kaitlin will eat some seafood but that's about it.
Vickie's post on Linguine and Clams looks so good and affordable but no one will eat it but me.  Damn family palates anyways.  I can get live clams too!!!

I suppose I will wander off now.  To do what?  I don't know! 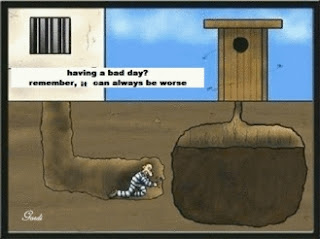 Posted by Bushman at 8:45 AM
Email ThisBlogThis!Share to TwitterShare to FacebookShare to Pinterest