Prologue
I was up at 5:30 this morning and for some reason I was thinking about the moonlight and how it reveals to me what has happened over night.  Of course there was no moon this morning and I wished there would have been because I had to don my boots and jacket and shuffle through the snow to see what it was like out there.  So I just couldn't shake the thought of moon beams and with a spot of Van Morrison singing in my head I conjured up the following images.  Perhaps those moonbeams are not always such a good thing.
Please enjoy this little story.  I will try and work on it everyday until finished.  If you don't like it you won't hurt my feelings because at least I know you read it.  Thanks to all my readers. 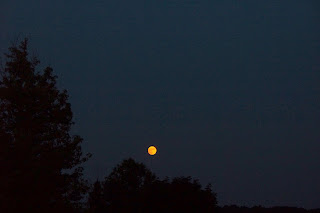 Somewhere deep in the recesses of the night a clock ticks pretentiously. Far too fast yet slow and rhythmic. Tick. Tick. Tick. It's noise foretelling of the day to come and the day being lost. Outside the window a cricket chirps in time with the clock. Singing his song while making his intentions known. The full moon shines brightly and its illuminate is just beginning to reach the edge of the window, creating a beam of light that stretches mightily and lands on the floor. In this circle of light sits a small field mouse nibbling on a crust of bread that was knocked to the floor during the previous eve’s dinner. His whiskers quiver as he nibbles and his tiny paws hold his morsel with grace and confidence as he rolls the bread around eating the best bits first. Another mouse appears at the edge of the moon circle and tussles with the first trying his best to gain access to the tiny bit of bread. They both scurry back into the shadows leaving tiny footprints in the dust on the wooden floor.


The room sits quiet. The mice have left in search of more treasures and the crickets have stopped. The room is growing colder. The fire, left unattended, is now just a handful of red coals glowing mightily but unable to fight the cold and the darkness. Soon it shall be swallowed by the night.

To the side of the fireplace tucked away in the corner of the room are a table and two chairs. One of the chairs has been knocked over and is lying on its side. It has landed mere inches from the dying embers of the fire. On the table is a piece of paper. Its content is unreadable in the darkness. On the other side of the fireplace, within reach of its heat, are two wooden bunks. The mattresses appear to be stuffed with straw. The bunks are situated side by side. On the far bunk is a shape that resembles that of a human form but the darkness cloaks any distinguishable features. It is for now only a shape and a shadow. The near bunk is empty except for a small stuffed toy bear.

As the night deepens and the moon arcs across the sky the moon circle slowly creeps across the floor. It reveals new things in its methodical plodding across the wooden planks. There are muddy footprints strewn about the floor. A bureau has been upended and a few remnants of clothing lay scattered amidst the muddy footprints. The door has been left open a crack and the late October air is battling the remaining heat in the room. The moon circle moves ever so slightly and as it reaches the edge of the bunks it reveals a slowly spreading pool of red. The moon circle travels over the bunk and past the fireplace to the table and as it illuminates the paper a gust of wind breaches the door and whisks the paper from the table and it sails to the floor directly in front of the last dying embers of the fire.

Another breeze infiltrates the cabin and the embers quickly react to the fresh oxygen and burst into flames once more with a quick snap and pop. It is the pop that sends the small ember arching into the air to land directly on the paper. The paper begins to smolder and as another gulch of air penetrates the room it is swept under the fallen chair and ignites into full flame. Its orange tongue licking at the dry wood of the chair and it is only moments before the chair is burning brightly. The whole room is lit up and now we see the tragedy that has befallen this one room cabin.

As the structure begins to burn readily the last thing visible are the two mice which scamper quickly out the open door and into the embraces of the night. As they scurry away from the cabin snowflakes begin to drift from the cold October sky.


This story now has it's own blog page.  You can find it on the right side of the screen at the top of the page.  Check in for new pages.

Posted by Bushman at 7:27 AM
Email ThisBlogThis!Share to TwitterShare to FacebookShare to Pinterest