Woke up to another 4 inches of snow this morning.  Add that to the 6 or 8 we had on Sunday/Monday and the sum is ......BFM of big freaking mess.  I don't have a truck anymore.  I used to have a 1980 Chevy pick up that I spray painted camo.  It was ugly (not to me) drove terrible and had brakes about as good as a Patrick Swayze movie.  But........it was 4 wheel drive, it was camo and it was a truck.  My man card was still intact.  Then came the Daytona 500 Budweiser shootout one February Day.  Perhaps at this time it was called something different but I don't remember because I had been celebrating way too much that day.  I was drunk.  Not just drunk but wiggly arms and can't think straight drunk.
There was a party at my neighbors who lives directly behind me about 3/8 of a mile.  Straight driveway, flat driveway, tree lined driveway.  It was the last one that got me.  Damn trees anyways.
Back up just a bit.  Even though I was drunk I had perfected the world's greatest pot of chili and was taking that as my dish to pass.  My brand new slow cooker loaded to the rim with Brim  mouth watering Texas goodness.  (not sure where chili originates from but in my world it's not Mexico)
To make a long story short I got behind the wheel of that camo truck and proceeded to drive back to said neighbors house.  Unfortunately as I said before the drive was tree lined, I was drunk and my truck had brakes that worked as good as Whitney Houston in rehab clinic.  I soon discovered that #1 steering wheels and foreheads are impressionable.  #2 Chili makes a rather disgusting windshield wash.  #3 Big trees do not move no matter how fast you go.  #s 456789 all deal with not driving while...... need I say more.
So no more truck.  Sold it for scrap for $200.  I don't know why I thought the Budweiser shootout was to be held in that particular neighbors driveway, but I can tell you that if you are going to drive a 26 yr old truck with camo paint, bad tires and brakes as good as Paula Abdul's composure then let Lindsay Lohann do it.
She is a professional.  As for me...embarrassed, revoked man card, no chili, resort to car, big bump on head but mostly lucky for being so stupid....I no longer drink during the Budweiser Shootout.
I don't know how or why this story made it to here but I've shared it and sometimes things are not so Simple in my Life as it may appear.  Perhaps I am a very slow learner.  Nah, just an idiot.
Thanks for reading stop by again.
PS I miss my truck!!

Crazy picture but see the truck in the background? 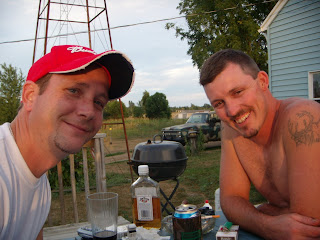 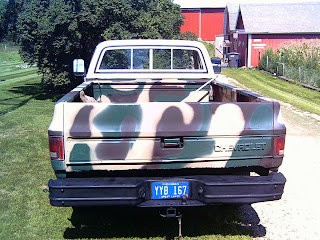 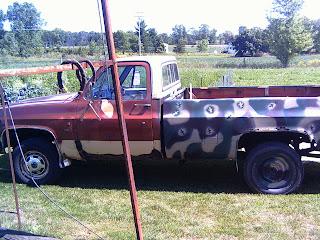 My wife says I'm a redneck but not really anymore.  I quit watching Nascar.  I don't drink domestic beer and I don't have sex with sheep.  Those are three qualifications that I don't have.  Until next time Bahhhhye!
Posted by Bushman at 5:21 PM
Email ThisBlogThis!Share to TwitterShare to FacebookShare to Pinterest