Good Morning and welcome to Sunday Salutations.  I woke up to a beautiful, although short lived, sunrise this morning.  I was downloading a picture from the camera chip and when it was finished the colors were already gone.  However the Simple Life archives are loaded with beautiful sunrises as well as sunsets and I believe I have one that looks just like this morning.  I'll use that one!! 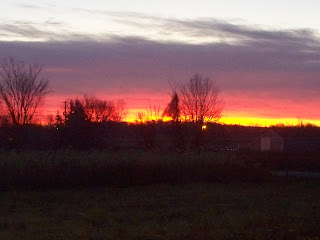 These pictures are the only way Momma ever gets to see the sun rise.  She is unwavering in her dedication to sleeping in.  The way I see it is if you sleep in all the time then there is no need for you to have a nap during the day.  Now who doesn't love Sunday naps on the couch with the puppies! 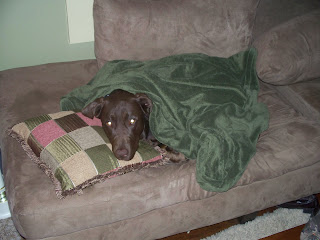 Gunner is always ready for a nap!! 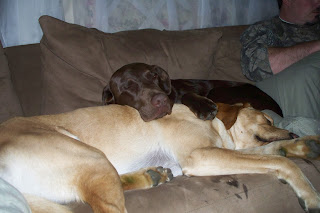 It's a hard life being a dog in my house.
Well I don't have anything funny, sarcastic or any rants today but I will let you in on my ham battle.
Never heard of a ham battle?  You take a giant spiral sliced ham on sale from the grocery store for $11 and you cook it for dinner one night.  Then you battle the ham to see who can last the longest as far as leftovers are concerned.  Here we go.....
Meal #1--Ham dinner with mashed potatoes and corn.
Meal #2---leftover ham slices in my lunch for work
Meal # 3---Fried egg and ham sandwich for breakfast
Meal # 4--Ham and cheese omelets for breakfast
Meal # 5---Fried ham and cheese on toast sandwich
Meal # 6---Ham and potato chowder with fresh fried corn fritters (pic) 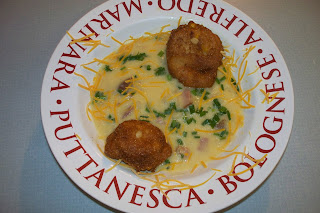 I still have ham left and I still have the huge bone in portion left with tons of meat on it.
I must confess I think this ham is going to win.  I will have the last bit of sliced ham for breakfast this morning but the bone is going to have to go in the freezer.  The chowder was fantastic and I still have leftovers from that to eat, so any soups will have to wait.  I dare you to try your own ham battle.
The best part of this particular battle was the fact that the ham was only $11.  Normally they sell for $25-$30
I cashed in on the overstock from the holidays.  Smoked hams last a long time.  I should have bought another one and froze it but my freezer is unplugged with the depletion of my venison stores.
The recipe for the chowder was simple.
Melt half stick butter in pot.  Saute' half onion till translucent.  Sprinkle with a TBS of flour coating all onions.
Add in about 32 oz chicken stock and bring to a boil whisking to keep it smooth then add about 8 cups diced potatoes as well as your chopped ham reduce heat to simmer.  Eyeball how much ham (or bacon) you want in it.  Simmer 20 minutes or so until potatoes are tender.  Add in one can of cream of chicken soup.  In a separate pot heat a pint of heavy cream until warmed. (or half and half)  Do not boil it.  You just want it to be hot going into the potatoes so you don't have a temp fluctuation.  Stir in the cream/milk to the simmering potato mix.
I added a handful of shredded cheddar cheese to the pot and mixed it in until melted. (good thickener)
You could also use cream cheese 6 oz or so.  Garnish with chopped chives and a sprinkle of cheese.
For the fritters use 1 1/4 cup self rising cornmeal, 1 1/4 cup of flour, 1/4 cup sugar, 1 tsp salt, 1 cup milk, 2 eggs slightly beaten (they still need to go to school in the morning) 1/2 stick melted butter, can of sweet corn, oil for frying.  Mix cornmeal, flour, sugar and salt.  add milk to eggs whisk and add to flour mixture.  Stir.
Add in butter and corn. mix well.  Drop mix by tablespoon into hot oil.  About 1/2 inch deep in a fry pan works well,  fry about a minute per side.  Do yourself a favor and eat this with the chowder the two make a great combo.  Sweet and savory, creamy and crunchy.  Yummmm
I'm gonna drop the whole porno thing.  It creeps me out because so many titles have the word teen in them and I have two teens.  Yeah you get the picture.  What is up with the porno world?  Leave the kids out of it!
I'm sure there not actually teens (on cable that is) but still I don't like it.
So I will be searching for a new post feature.
Thanks for stopping by and here is my picture of the post (you already had four, spoiled brats) 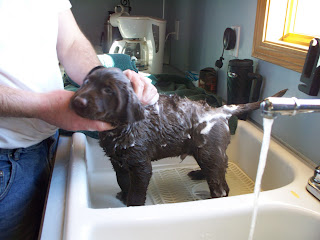 Big Brown Dog's first bath!!!!
Posted by Bushman at 8:34 AM
Email ThisBlogThis!Share to TwitterShare to FacebookShare to Pinterest