The dog days of winter

Whew!!
It's all I can say for now.  I've just arrived home from the end of my work week.  No overtime this week.  I can say I'm ok with that.  Burned out!
The dogs have been fed and have been outside in the balmy evening air.  Fantastic weather for mid Feb.  52 degrees.  Snow is almost gone.  That is good and bad because it reveals what the dogs have been doing to my back yard all winter.  Yuck!!!  Oh well a small price to pay for having two best friends at your beckon call.  So I found a clean spot and also found Remmi's ball which was buried under a snow drift.  Much to his delight we played fetch for awhile.  Him running crazily across the soft ground and me side arming the ball as far as I could while sipping a beer.  It doesn't take long to tear up some turf with this dog so we had to stop after a bit.  I would have moved to a fresh patch but the space was already taken by....well lets just say it was occupied!!
Valentines day was fun.  I thought I had the one up on the wife but she surprised me with new work boots, chocolate and a card.  I had purchased a card and the ingredients for an apple pie.  I thought we could have pie and ice cream for desert on Valentines day.  I didn't think she was getting me anything.  Sneaky chick hid them in my car and when I went to work that morning(5:30am) I discovered them.  Totally surprised because she had mentioned maybe not doing anything for the occasion because we are saving every penny for a house and I had agreed. (hence my one up with the pie and card)  So... after work I had to run to the store to sweeten the pot you could say and picked up some house slippers and some fuzzy, cushy socks for her.  There... even!!  The pie was yum yum and the boots didn't fit.  I'll return them for the right ones. Peanut butter hearts and marshmallow chocolate I took to work and chowed in front of the non gift receiving guys!!  Hey it's not my fault they didn't give.  Cuz they would've got and we all would have been munching the day away.  The kids even got shoes and slippers and yummies.  It was a foot theme I suppose.
We are heading up North tomorrow.  So no posts from me after tomorrow morning.  I could post from my phone but I won't.  It will be nice to get away.  I need a pick me up.  I fear depression is setting in and I am virtually powerless to do anything about it.  I gotta say the mind is a very powerful thing.  You get yourself in a funk and its impossible to recover.  Well enough for now.
My picture for the post is of my dogs.  I post lots of pictures of my dogs, they make me happy.  Green grass makes me happy as well so to hell with it I'll nail em both! 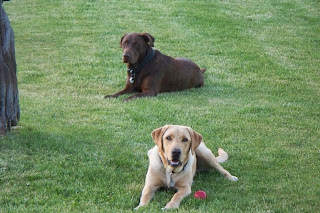 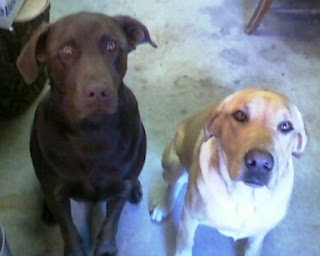 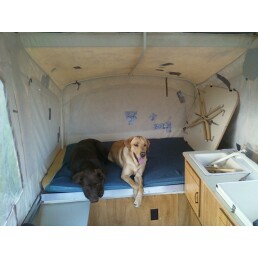 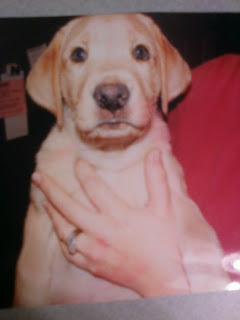 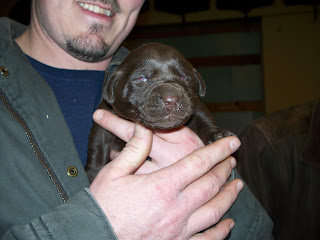 ﻿
Posted by Bushman at 5:22 PM
Email ThisBlogThis!Share to TwitterShare to FacebookShare to Pinterest