Hello there and Happy Monday to ya!
Sorry I missed Sunday salutations but I was in jail busy doing Mother's Day Stuff.
I even got up early and went grocery shopping.  I was in the store at 7:45am.  This is not a Mother's Day thing because I generally do the shopping anyways along with all the cooking and dishes and yard work and poo pick up and......you know maybe I wasn't busy doing Mother's Day stuff.  It was mostly my stuff!

When you add that in with Mamma's stuff like cleaning the house and doing laundry I was a busy beaver.
So I'm glad that's over!  Too much work!

This weekend was mostly uneventful.  Lot a work on the car and cutting grass and what not but in one of my pit stops for a beer moments of rest I looked up from my perch in the lawn chair and saw a full size trampoline being carried down the middle of the road!  My first thought was, those guys have a lotta balls stealing a trampoline in broad daylight!  But on closer review it was my neighbors and given the direction they were coming from I assumed they had either bought it from the other neighbor down the road aways or it was given to them.
Regardless the total distance traveled from one yard to the other was probably close to 400 yards.  These two guys are skinny as a rail not weighing more than 135 lbs a piece and they hauled that thing all the way down the road.  It was pretty funny.  So me being the nice guy I am jumped in my car and drove up behind them and yelled lift it up, they did, and I drove underneath it and instructed them to let it rest on top of the car.  The weight supported, I finished the trek for them with a Chevrolet Malibu trampoline mover.
I can picture Jeff Foxworthy scrambling for a line on that one!
Browsing through the local paper I noticed a beer tasting event being held next Thursday at the county courthouse!  Hey cool...wait a minute.....I'm on to you guys.  Oh wait... it's the old courthouse.  OK I'm in!
$25 per person and the event holders are a local business aptly named A taste of Michigan.  They spotlight various local growers, wine makers and breweries.  I'm trying to get a few guys together to go hang out and give it a whirl.  We'll see what happens.

Also in the paper I noticed an anniversary.....I think.  You decide! 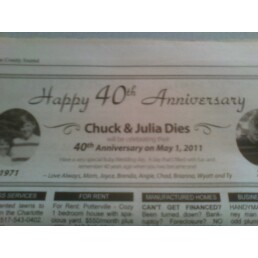 Had a nice bon fire on Saturday.  A few brewskis and a little JD.
Had a few marshmallows but no graham crackers so I just toasted the marshmallow nice and gooey like, have a pull off the half pinter and chase that with a marshmallow.  The trick is to catch the mallow on fire and when it's black all around then it's ready.  The burnt sugar goes really well with the whiskey!
Nothing on the house yet.  Drove by on Sunday after visiting with the Mother in Law and no evidence of anything other than the grass growing faster than the price of a barrel of oil.  Oh wait nothing grows that fast but it was getting pretty thick.  Some spots were probably close to 8 inches already.  It's gonna be a freaking nightmare.  It's got me all messed up.  My inner compass is not pointing north these days.  More like south.  I don't care what all the Dr. Phil wanna Bes say sometimes you just don't have the mindset to pull yourself up out of the slop!   Some days I wanna just knock the tar out of people and others I just wanna cozy up with a case of beer and let it ride!
To top that off my landlord says to me the other day I have someone ready to move in so what's your hold up?  I need to walk her through the house sometime this week.  Hint Hint.  Get out jack wagon!
I should put those $500 gas bills on the counter so she can see those when she walks through.  I was told the energy bills on this place were average.  Average of what?  Anyways this is sliding towards the black post on the battery so I'll check out without any books today! 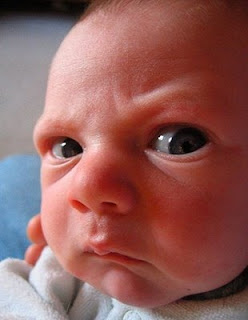 Yep still pissed!
Posted by Bushman at 5:49 PM
Email ThisBlogThis!Share to TwitterShare to FacebookShare to Pinterest