Welcome to Sunday!
An overcast yet almost warm morning.  I took (drank) my coffee on the veranda (deck) this morning.
Winston (me) served it to me piping hot with a piece of toast and marmalade (splinter in the foot from walking on the deck barefoot).  The children (dogs) pranced (rolled around) in the wet grass as the song birds (crows) chirped melodically beside me.  Their beautiful songs awakening the creatures nearby for me to listen to (semi truck on the freeway hitting jake brake).
Ah who am I kidding.  I woke up with a headache (too many speed beers), was out of bottled water to dry up the savanna in my mouth and had to slurp down calcium and iron infested water out of the tap.
I did have coffee on the deck while listening to the symphony of the freeway and the dogs did roll around in the wet freshly cut grass from yesterday.  Makes for an interesting mess on the kitchen floor when they come in.  Only enough coffee left for half a pot, no milk for pancakes and I can't get this damn splinter outta my foot.

So how the hell are you this morning?
I remember the days when we used to attend church.  Well some of it anyways.  I was young.  I was stupid, naive and could be led to water and  forced to drink.  I didn't care.  Church meant one thing for me and I can admit this because I was just a wee wart.  Sunday School ( which I found out was for something totally different) was all about candy!  After every session each kid received a candy bar.  Now I don't know about you but my mom (at that time, I've had 3 of them now) did not let us have candy, of the sugared kind anyways.  More like honey coated chunks of sesame seeds.  Like someone scraped off a fast food bun, punched pooh bear in the kidneys and stold his pot (either way you want to read that is fine with me) and combined the two.  Sesame seeds get stuck in your teeth anyways did they think the honey was necessary?
I'm just asking.  That was our candy!
So Sunday School was a glorious day for me.  It was only like two hours of camels, fairies, stars and stories about wise guys.  I could manage.  At the end a reward was forthcoming.  Then everything changed.  You had to do stuff (no not the Catholic kind of stuff you perverts) like memorize Bible verses or get answers right on the Bible quizzes.
I don't remember all the nuances but I was pissed!  How dare they lure me into this tiny room with visions of real candy and then expect me to work for it.  I would show them!  So I learned the verses and answered the quizzes.  C'mon it was candy what was I supposed to do?  Go back to the horse treats I was being fed at home!
Sadly enough the fad did not last long with my folks.  Church went out the door and they stuck us in private school instead.  I wonder if they thought that if we went to churchy school then they didn't have to go to church?  I can see myself making that work in my mind.  Hmmmmm.......
Actually I think it was to keep us away from drugs and alcohol.  Middle school is where it started back then.  Nowadays I think it's early 5s.  Well it kept us safe.  For a couple years anyways.

So that was what I used to do on Sundays.  Now I deal with hangovers, angry lines at the grocery store, forcing children to complete homework (usually from 8pm till midnight) and if I'm lucky maybe some weeding of the flower beds or mowing the lawn because I was too drunk to do it the day before. 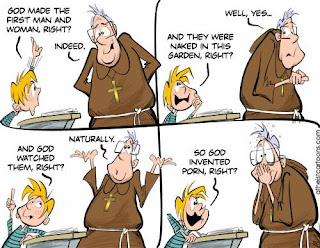 Disclaimer:
this post was brought on by the likings of Bruce's Evil Twin and his reminiscing of early days and foods his family ate as well as the true meaning of Sunday School inspired by Pearson's Report ( see link above)
These stories are only for fun (but true) and I have never claimed to be too drunk to mow the lawn.  The lines are not as straight but it gets mowed nonetheless!  As far as horse treats don't do it people,  don't do it.
Posted by Bushman at 8:59 AM
Email ThisBlogThis!Share to TwitterShare to FacebookShare to Pinterest