On Trial and Something New!

"Ladies and gentlemen of the jury please be seated, counselor if you will"

"Yes your honor"
"Ladies and gentlemen what you are about to hear may be shocking in detail and the horrific events that are about to be recanted may never leave your memory", the attorney began as he glanced at me with malice in his eyes.  "The events that lead up to the tragic ending are no less than many of the deeds we have witnessed in our history.  Those of the dreaded Hitler as well as John Wayne Gacy and perhaps as mind blowing as Jeffrey Dahlmer."
The jury was becoming entranced with the overweight man as he shifted his weight side to side, moving with the words he spoke.  The conviction in his stance and in his voice only added to the surrealism of what I was facing.
"The defendant", he paused and I could feel the eyes of everyone in the courtroom bearing down on me.  A thousand little fires burning through my skin, looking deep for the truth.
"Will tell you that he is innocent and only acted in self defense but I am here to convince you otherwise''.
A bit of spittle had collected on his lower lip and he began to remind me of the evil St. Bernard from the movie Cujo.  Only it was me he was after.  Trapped in the defendants box an encased in handcuffs there was no way out and I could only sit and stare as the bubbles moved from his lip to his chin.
"He knowingly took those pills in an effort to murder Mr. Rhinovirus and all the tissues in the trash can at the defendants house?  Are those not enough evidence to convince you of the malformed intentions of this horrible monster?"

I was startled awake as he slammed his hand down on the jury box and realized I was asleep in my own bed and Mr. Rhinovirus was very much awake as the snot rolled from my nose and soaked into the pillow case.
Head pounding, chest burning I sat up and glanced at the alarm clock.  It's glaring red 5:04 caused my eyes to water and itch.  Wrenching myself from the warm, comfort of my bed I headed for the back door to attend to the needs of my dogs.
It was cold in the house and after I made a pot of coffee I built a fire to help warm the little bi-level.

It is now 8am and I have medicated myself as the attorney said but in no way have I murdered Mr. Rhinovirus........yet.  I'm not even sure that is the right virus but I like the name and it sounds evil.
Bastard has kicked my ass for three days.

Oh well I was due.  I haven't been sick for a long time, physically that is.  Mentally?  Always.

Oh hey guess what I got? 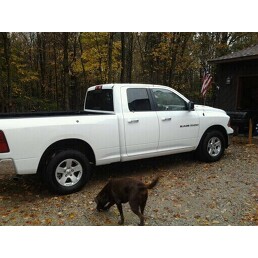 Yep!  A 2011 Dodge Ram 1500 quad cab 4x4.  I have never owned a dodge pick up and I really like the looks of this one so I traded in the Malibu for it.  Yes the boo is gone.  They didn't want it but I made them take it.  I'm pretty happy about it.  I also made them throw in a hitch for it which will be installed next Saturday.  Look out deer camp a new ride is coming in!
I have also been on the firewood rampage still.  I have quite a bit piled up now.

My next project is to install a fan in the ceiling of the downstairs living room where the fireplace is.
It will be basically a bathroom vent type fan.  Installed in the ceiling downstairs then I will box in the floor joist and cut a hole in the floor upstairs and install a grate over it.  It will be controlled by a switch on the wall and theoretically it will suck the hot air from the ceiling down stairs(heat rises) and blow it into the upstairs living room.  Right now I have a fan on the floor which blows the heat up the stairs but I believe this will be a better way.
For now I am just gonna lay low and see if I really can kill Mr. Rhinovirus or maybe he'll just leave on his own.
Snotty rags and drippy noses,
-Bushman