Well Halloween went off without a hitch.  Nobody showed up at our door for candy.  Perhaps living out in the country and the 55 MPH speed limit deters children.  Nonetheless the multi-pack of candy did not go to waste.  I am a sucker for candy bars.
I've been hearing reports that people are missing my blog.  October 15th was my last publish date.
I won't say sorry because I'm not really.  I'm still sick with this damn cold that bounces from head to chest every other week.  Yesterday marked the three week mark.  I've taken every thing available besides a lead pill to get rid of it.  No luck.
I have also been busy cutting wood, cleaning leaves, butchering deer and a little thing called work where the overtime seems to be pouring from every blood stained orifice they have.
Why can't we do the overtime thing in the dead of winter when there is nothing else to do?  No, not us, let's do it in the Fall when it's the busiest and best time of the year, for me anyways.
There is also this particular little rat living in our computer room (some say he resembles a kitten) and his bathroom tray is in there and it is kinda stinky (even through my plugged nose) and he also tries to catch the cursor while it moves across the screen as I type.  Everyday I come home from work and look at the computer to see what websites he has been on.  It seems as though the keyboard is a good resting place for little rats.  So I came in here this morning and we had a talk (the rat and I), I dumped the litter (he briskly began to fill it up again) and he agreed to sit calmly in my lap as I type....no....wait a sec...never mind.
Funny how things work out.  After much whining and pleading by other members of this clan I agreed to bring home said rat under the condition that he is to be an outside rat and catch all the little chipmunks living in my shed, garage and woodpile.   The biggest condition is that I would not clean the litter pan.
So with that said momma pulls a fast one on me and says one day, about a week ago, I can no longer change the litter.  Bullshiznit you told me that..........wait a minute.....no way.........way?
Yep were pregnant.  Me with a beer belly and her with a baby.
At 37 years the Old man upstairs has decided to give me one more shot at Fatherhood.  We have been married for almost ten years now.  This is our third pregnancy.  The first two only went 5 months.  Corwin and Isabella were not meant to roam this earth with me but perhaps this one will.
Call it Karma, Fate, Faith or happenstance I don't care but about a week before she told me the news I was driving to work, it was dark, and I saw the biggest shooting star I have ever seen.  It streaked from one end of the sky to the other and it was super bright.  Without a moments hesitation or thought on the matter I wished for a baby.  Not messing around here people that is the truth.  I told people about the shooting star but never about the wish.  They asked but I told them it wouldn't come true if I told them.  Now I can.
We were also recently discussing the idea of surgery for me so we wouldn't have to worry about raising children from a walker or a nursing home.
Just weird how things happen.  I am ecstatic but also anxious and nervous with a bit of sadness thrown in.  We do not know for sure what will happen but we did have some preventative measures put in place after we lost Isabella.  It seems as though they may have figured out why she wasn't able to go full term.  Hopefully we have solved that problem.  One more shooting star and I'll take care of that one too.
The new truck is awesome.  I love driving it.  It makes me happy to be in a truck again.  I have so many neat things picked out for it.
Oh yeah we changed the Christmas song to..."Remmi's nuts roasting by an open fire".
Who the hell is Chet anyways?  Santa's hobo helper? 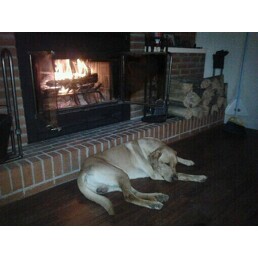 I suppose that is enough for now.  I will try to post more but this is a busy time of year.
Until next time,
Bushman
Posted by Bushman at 8:16 AM
Email ThisBlogThis!Share to TwitterShare to FacebookShare to Pinterest