Merry Christmas and my new Countdown!

First off a big Happy Birthday to you Jesus!  No thanks needed you've done enough already!
(if you wanted to magically fill my propane tank I probably wouldn't care too much)


Well I don't know about you but I didn't here any pitter patter of hooves on the roof last night.  All I heard was momma snoring and an occasional air biscuit.  Nonetheless when I awoke there was a plethora of gifts under the tree. (cuz we put them there, DUH)
Unfortunately it was only 5:15 AM when I got up.  You would think I am the kid.  The children will have to be undoubtedly pried from the warmth of their beds and forced to join us by the fireplace to finally see what it is that Mom and  Step Dad had to max out their credit cards (again) for.  Ugh, poor kids!
They had their first Christmas at Dad and Step Mom's house yesterday and today they will have Christmas with us and then later they will have Christmas at Grandpa and Grandma's house and tomorrow they will be asking for money so they can buy more stuff!  Somehow it doesn't add up.  The dollars either.
Speaking of Grandma and Grandpas house.  Why is it we have to have every Christmas dinner over there?  My brother in law has a big house, we have a medium house and they have a trailer.  Brother in law has a wife and four boys, there is Momma and I and our two young-uns and then there is great grandma and her boyfriend (I know sounds weird to me too) and finally Grandma and Grandpa.  That's 14 people.  In a trailer.  Perhaps I should say modular to be politically correct.  Also I love to cook and preparing a holiday meal for 14 people is right up my alley.(even though I am a horrible bowler)  Oh well it's a good thing I love them all to pieces because then it would be miserable.
Well not Great Grandmas boyfriend.  Not even sure what his name is.  Lets call him
Alfred P. Winstermaurel.  A British accent would probably be fitting along with one of those nose moles with hair growing out of it.   Don't forget the cane and the monocle.
So our morning shall proceed as follows.  Drag kids out of bed by 9 AM.  Open gifts until 9:08 (not a high limit on our credit cards), breakfast at ten.  Showers and what nots (nap) and off to the hot box by 2PM.  Dried out ham or turkey, accompanied by non traditional side dishes such as fried chicken and or baked beans, if were lucky great grandma will head back to her trailer(she talks to much anyways) and we can play a few games of euchre and drink the rest of the beer I have stashed in the garage.  Bloated and half drunk I will turn the keys over to Momma and we'll head home by 6 PM.  Once home we will have second dinner, chase momma around the house with unabashed intentions, realize daughter is standing there with eyes indicating mild shock, stop unabashed chasing and head to bed alone (with yellow dog) and snore my way to tomorrow.(with repeated elbows to the side followed by "roll over your snoring")
That is my day in a nutshell.  I hope yours is as good as that.  hard to beat I know but give it a shot.  I mean who doesn't like ham jerky or fried chicken for Christmas?

I found next years countdown!  Why didn't I think of this? 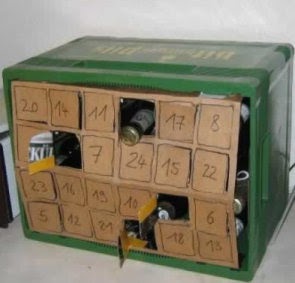 (this post was only intended for your entertainment.  All views and opinions expressed herewith are for the sole purpose of deriving laughter.  I love my in laws and they always have good jerky  food.  I am always in a great Christmas Spirit and wish you all the same.  Peace!)
Posted by Bushman at 7:20 AM
Email ThisBlogThis!Share to TwitterShare to FacebookShare to Pinterest