Today's Post is Brought to you by the Letter B

Have I told you the story about my Big Brown Dog?
My big brown dog's real name is Gunner.  We call him big brown dog.  Just do.  He is my most favorite big brown dog in the entire world.  We picked him out of the litter when he was just a wee little one.  Although he was the biggest in his litter.  The breeders had given him the name Moose.  We tied a little blue ribbon around his neck and a few weeks later brought him home. 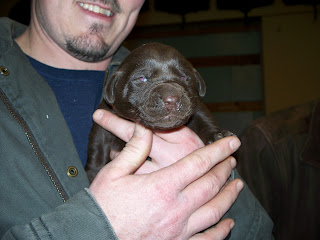 Gunner was a band-aid for our broken heart after the loss of our son.  He is a very special part of my life and I couldn't imagine being without him.
I will tell you he is not without problems.  Seems he has a knack for girls underwear, wood, lint rollers and Shout Stain Stick.  That episode landed him in the hospital for a few days.  He is a good boy though just has a touch of anxiety when I'm not around.  Most people like it when I'm gone!
Big Brown dog loves to swim, loves to play keep away, biscuits, rawhides and his most favorite thing in the whole wide world is to go for a ride!  In fact if you say the word ride, or anything that rhymes with it for that matter, he will whine like crazy until you either take his mind off it (biscuit/ice-cream) or take him for a ride. 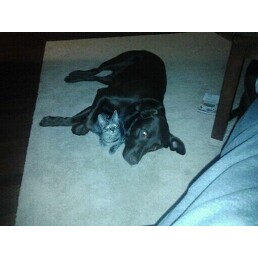 He loves his kitty too! 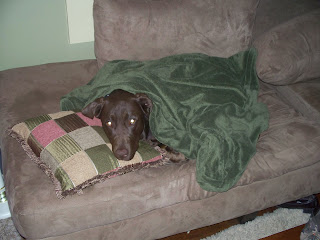 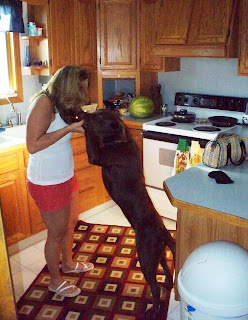 And dancing with his Momma! 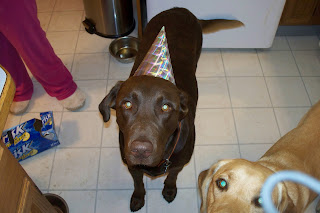 Although his birthday party is always fun with the cupcakes and the ice cream!