The leaves were turning and the nights were cool.  The perfect recipe for a change in the soul.  Orange pumpkins dotted the landscape and billboards for fresh cider began to emerge from the wilting summer vegetation.  Geese were spotted in the earliest of their annual migrations.

The summer chores, almost finished, hastily packed away in the hopes of being finished the following year.  So fast did the air change.  How quickly the sun moved to the southern reaches of the horizon.  The shadows grew longer every day.  He smiled at this.  Long shadows meant shorter days but the sacrifice was well worth it.  Wood smoke began to filter through the leaves from the surrounding houses.  Small fires, keeping neighbors warm in the cool evenings.  The fragrance tickled his nose as he breathed deep trying to identify the type of wood being burnt.  Cherry!  He smiled again.  In a few short weeks the frost would appear.
Autumn had arrived in all it's glory.  He was happy once again.

The anticipation was more than he could bear. He checked the calendar again. Ugh! 50 more days.
The preparation had already begun. Lists were being prepared, crumpled and prepared again. Equipment was piling up in the corner of the garage. Mental notes made, forgotten and made again in a brief moment of dejavu. Restless nights, cold dreams.

Of course if anyone knows me in the slightest you can figure out that I'm cuckoo for fall!
Hunting season is upon us.  Also the greatest of adventures is in the planning stages.
Deer Camp!
This season brings with it a new camper.  A chance to head north into the wild once again where the only power is that of nature.

In the meantime I am running around getting things finished up at home.  The backyard landscape has been transformed this summer with a new deck, new patio, flower beds and a new fire pit.  In process right now is the re purposing of the giant pile of concrete the previous homeowner left hidden in the woods.  I have been slowly clearing the tree line out for over a year now and this pile is now fully exposed.
This shot is from my upper deck.  The wall is in the back and the pile of concrete is in the front.  The big leaning tree will be cut down soon. 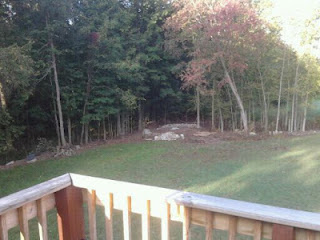 This is a closer shot.  I picked through the pile and got the largest pieces of concrete and built a small garden wall with them.  Many are covered in moss already but what I will do is gather moss from the surrounding areas, put in a blender with a little buttermilk and mix it up.  Then spray it or paint it onto the concrete garden wall.  The wall will eventually be covered in moss and you will never know it is concrete.  The big pile in front is leftover concrete either too big or too small.  This will be used to shore up the gravel turn around in the front yard.  The plywood you see is what I used to smother all of the poison ivy and weeds with.  I also had some carpet I put out as well.  This entire area was covered in saplings, ivy, brambles and a lot of household trash that they had dumped in the woods. 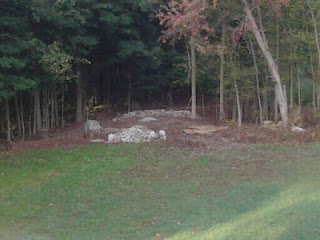 Last night I began burning all of the brush and leaves that I had raked up.  I have a wrought iron table and 2 chairs that will sit about where the fire is.  It is a small table and the set is painted a dark green so it will blend in well.  I will cover the entire area with mulch and next year plant lots of hostas and ferns and other shade loving plants and shrubs like Rhododendrons and Hydrangeas.  It is my little shade garden and will be a great spot to sit and relax next summer in the heat of the day. 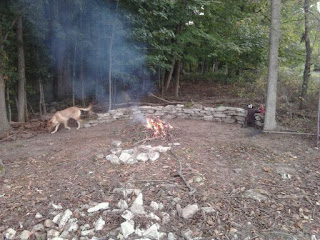 Enjoy this beautiful weather.  Next weekend Momma and I are going camping in the new pop up.  It is just for a few days but we haven't had the chance to get away together at all this year.
Cheers!
-Bushman

Posted by Bushman at 9:12 AM
Email ThisBlogThis!Share to TwitterShare to FacebookShare to Pinterest