E is for Italian Mobsters

The sandy haired teenager stares intently, his brow furrowed.
"What the hell is this", he asks.

"It's called an El Camino", his cohort answers.  A shorter stockier version of his friend but also managing to have the same hair color and hair cut.
Both boys wore large plastic "diamonds" in their left earlobes.

"And what exactly are we gonna do with that piece of shit ?", sandy haired boy asks.

" Well we gotta get the topsoil somehow.  What else are we gonna do?  Carry the shit in our pocket?"

Sandy haired kid's cheeks immediately begin to turn rosy.  An assault on teenage pride has been made and stocky boy has no idea that sandy boy has been secretly wanting to whip his ass for some time now.  He's lucky that Coach said no trouble over spring break or your off the team.

"C'mon cheesedick let's get it done.  If we don't have it all delivered to Bushman's house by the end of the day he said he wouldn't pay us.  That guy can be a real prick if you don't do shit the way he asks you to".

Sandy reluctantly agrees and they head to the landscape yard in stocky's Dad's El Camino.

Little do they know that El Camino axle springs are not made to hold 2300 lbs of weight.

The trouble that is only just beginning to bubble will soon reach an unforgettable boil.


No really, did you think I was gonna do El Camino?

The whole shebang of the post is about efficiency.
Thinking ahead, planning.  All the boring stuff that no one ever wants to do.

They say the Devil is in the details and I bet if that story continued on (which it already has in my mind) those two boys will overload that thing with topsoil because they are in a hurry to get done and get paid.  A tire will blow out as they are cruising down the road at 50 mph with the rear bumper making sparks on the pavement every time they hit a bump.

The blown tire will lead to a.....well I'll just let you write your own story.

Efficiency is my E word for the day.  Time is precious.  (Some say time is money but I never see any of it)
Here's a question for ya?  Would you rather spend a hot July day bent over your tomato plants weeding or sitting on the beach making objects out of giant white clouds?

Yeah me too.  I love weeding!
NOT!

So I says to myself.  (use Italian mob voice here for best effect)

"Self?  Waz it gonna take for you ta get oudda dis place and have some relaxment?"

"I need to be more efficient", dorky self (not mob self) says as he wipes the dirt from his encrusted knees and mops the sweat from his forehead.

" Hey great idea sir, the kids should be here soon with the topsoil.  We can fill the boxes with soil and then put the weed fabric over it and staple it to the boxes.  Then we just cut an X in the fabric and plant those beautiful tomatoes in there", dorky self is getting excited and there is a little bit of spittle hanging off his lower lip, but his eyes are shining bright.

OK enough of the Italian talk.  Too hard to do.  I'm not even Italian. I'm mostly German and Irish.  I shouldn't even be growing tomatoes.  I should be growing potatoes and sauerkraut, Leprechauns and Nazis!

Efficiency.  Short and simple.  Keep weeds at bay by whatever means necessary.  Newspaper, cardboard, weed fabric.  I shy away from plastic because it keeps the rain and nutrients from filtering through.
Next conserve moisture.  Place mulch around your plants on top of that weed barrier.  It helps retain moisture and also helps block weeds.

This year I am making new boxes.  Deeper and also with a built in....never mind.  I'll save that for a later post.  Here is a shot of my garden from last year.  Boxes with weed fabric covered in grass clippings. 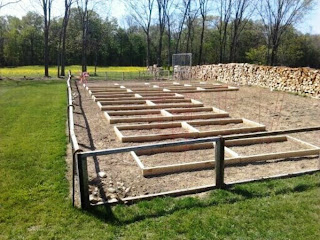 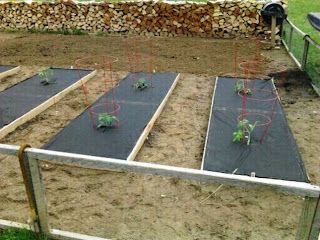 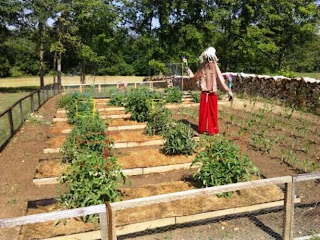 Of course you can't be this thorough with every plant, for instance the corn rows in the last picture, but you can see how much I cut down on weeding already.

Now I can spend more time enjoying the summer instead of suffering through it weeding the garden which by the way will ultimately end up with you hating the garden because it's just a big pain in the ass weed factory.  Try this and you will love it.  It's a lot of work early on but hey, early on in summer you don't mind being outside.  It's just beginning to warm nicely and the heat of the late summer isn't burning the freckles off your shoulders yet.

Posted by Bushman at 5:21 AM
Email ThisBlogThis!Share to TwitterShare to FacebookShare to Pinterest