F is for Guerillas

The crate stood tall as a man.  It's wooden sides were marked with a multitude of international customs stamps.
The man eyed it suspiciously.  He envisioned all sorts of things the crate might hold.
The first being a guerrilla.
He chuckled at the thought.  Why would he think there was a guerrilla in this wooden crate.  Duh! There were no air holes in it.  Couldn't be a guerrilla in there or it would suffocate.
He sat down on another crate and let his imagination run wild as to what it might be.

The fog horns on the old rust bucket bellowed into the emptiness of the ocean signaling midnight.

The old ship had once been an esteemed cruise liner and an honorary member of the Queens fleet.  Now it was reduced to a cargo ship whose hold still held remnants of the maroon carpet with a gold paisley pattern upon it.

The man spat on the carpet and watched as the brownish tobacco spit sank into the fibers.
"Fuck it", he said aloud.  "I'm gonna take a peek inside."

He thought if anyone asked he would tell them it tipped over and the lid popped off.
What's the worse that could happen?  Jap Juice would come spilling out of it?

He pulled a crowbar from the maintenance closet and began prying the lid off the crate.

Prying, pulling and pushing he managed to wrestle the lid from it's grasp.
He slid another crate over next to the box and stepped up on it.
Slowly he stretched his head over the top of the crate.

Once the meal was over the Five Spotted Hawk Moth waited patiently for another victim to feed it's young.

Every time I see a tomato worm I swear it must have been a laboratory creation sent over on some creepy ship to destroy our hard work.
The Five Spotted Hawk Moth is the beast that eats our tomato plants.  Well sort of.  She lays her eggs on the underside of the leaves and they go from this 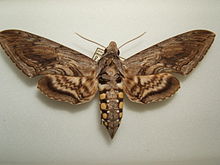 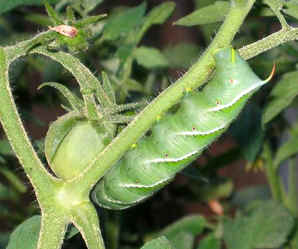 Vile creatures they are.
I'm not a big fan of pesticides but when it comes to these guerrillas I sometimes use them.
I also get my revenge another way.
Hunt them down and roast them in a fire.
These caterpillars come out at night to feed.  It's almost impossible to find them in the day.
Just wait till about an hour after dark and take a flash light into the garden.  They like to feed at the top leaves where it's more tender.  You can pick 'em off the plant and put them in a bucket.  Chickens love to eat them.
You can tell they have invaded by looking for chewed up stems and also little black pellets of poo on the ground.
Last year my daughter and I went hunting for them.  We had excellent success and wiped them out clean in a couple nights. 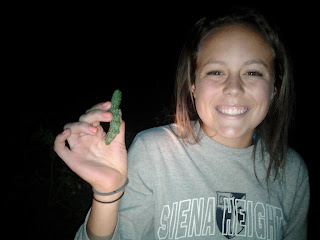 The only way to make a horn worm look half way decent is to have it pose with this cute girl !

In all seriousness they are harmless.  Just pick em off and destroy them.  Tilling your soil in the spring will kill off any remaining pupae that are buried in the soil.  Once these buggers are done munching they bury themselves in the dirt and pop out in  the spring as the moth version.
Could you imagine Tokyo under attack from this guy?

ps.  Jap Juice is a story I wrote a few years ago.  It has about 12 chapters to it.  It's all here.  Mired in these pages.
Posted by Bushman at 5:46 AM
Email ThisBlogThis!Share to TwitterShare to FacebookShare to Pinterest