G is for dreams

Wrestled from his slumber the man awoke with a feeling of anxiety deep in the pit of his stomach.
He laid still in the dark.  Careful not to move and wake his sleeping wife.
The dark room was lit with the faint green glow from the numbers on the alarm clock.
In the fluorescent glow he could see a half full water bottle and a cell phone paired with it's charger.
He reached for the bottle.  Carefully he opened it.  A slight crinkle of plastic shattered the dark silence.  He stopped, hesitant to drink lest he make too much noise.
The opposite side of the bed remained still.  A soft snore filtered it's way through the deep comforter.
He drank.
While he drank he tried to figure out what had awaken him.  It wasn't like him to awaken in the middle of the night.
He remembered.
His garden.  He had been dreaming about his garden.  The dream was slipping from his memory rapidly and he was at once saddened by the loss.  Why must dreams leave he wondered.
The bits and pieces that he could recollect were joyous and hard fought for.  Nurturing the seedlings to full grown, producing plants and protecting them from the cold weather, frost and winds.

He could see the people who had come from miles around to gaze at his beautiful work of art.  In the dream they were clapping.  He smiled and thought of the boy from the "Christmas Story" movie who had also shared such flamboyant dreams.


To see a vegetable or fruit garden in your dream indicates that your hard work and diligence will pay off in the end. It is also symbolic of stability, potential, and inner growth. You need to cultivate a new skill or nurture your spiritual and personal growth.


To see a flower garden in your dream represents tranquility, comfort, love and domestic bliss. You need to be more nurturing. 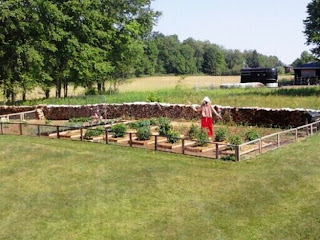 Posted by Bushman at 5:05 PM
Email ThisBlogThis!Share to TwitterShare to FacebookShare to Pinterest